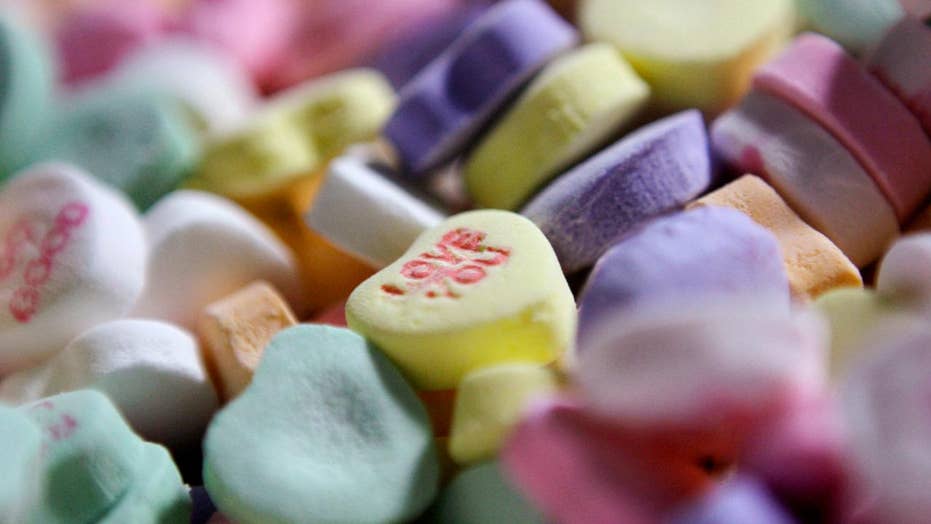 Women will spend an average of $64 on their significant other; Fox Biz Flash: 2/6.

To some of us, Feb. 14 is Valentine's Day. To others of us (names shall never be mentioned), Feb. 14 is Thursday. But whether you are off to some romantic candlelit dinner for two overlooking the Eiffel Tower or planning to sit in your pajamas on the couch alone, you will most likely be eating chocolate.

The chocolate industry has convinced many people that chocolate is a health food, growing sales to about $20 billion in the United States. Last year we consumed 4.085 billion pounds of chocolate, which is the equivalent of four Yankee Stadiums filled to the brim with Hershey bars.

How did this happen? Well, over 20 years ago Mars Inc. (think M&M’S and Snickers) started the Mars Center for Cocoa Health Science dedicated to “leading scientific research to help advance the understanding of cocoa flavanols and their potential health benefits.”

CLICK HERE TO SEE VALENTINE'S DAY AROUND THE WORLD

OK, it makes sense that a company hitches on to the superfood bandwagon to increase sales – and that in order to do so, it needs to establish the science behind its product.

But why do many people believe that chocolate is good for you? Is Mars just that good at marketing?

No. As Vox reported in August, hundreds of peer-reviewed scientific papers have come out of the Mars funding – and funny enough, almost every single study has resulted in favorable conclusions on the health benefits of chocolate and cocoa, the plant chocolate is made from.

Vox reported: “Here at Vox, we examined 100 Mars-funded health studies, and found they overwhelmingly drew glowing conclusions about cocoa and chocolate – promoting everything from chocolate’s heart health benefits to cocoa’s ability to fight disease. This research – and the media hype it inevitably attracts – has yielded a clear shift in the public perception of the products.”

While Mars does not disclose how much capital it invests into cocoa science, I can promise, it’s a lot. The company’s research doesn’t just come out of its own cocoa science center, but out of studies funded by Mars at major universities like Columbia, the University of California at Davis and others. This research has been published in some of the world’s most prominent scientific journals like The Lancet.

The general public (including me) is certainly not reading these academic papers, so how do we start to believe that chocolate is good for us?

The message that chocolate is healthy comes to us from news stories like one from Forbes headlined “Dark Chocolate May Boost Brain Function, Immunity, and Mood;  a story in The New York Times headlined “The New, Healthier Chocolate”; and even an article in Science Daily with the headline “Cocoa and chocolate are not just treats – they are good for your cognition”.

So it’s clear now that the chocolate industry is funding studies that tell us chocolate is good for us, and the media are picking up on these types of headlines. Which is all well and good if chocolate is actually good for us, but (to my mother’s enormous dismay) it’s not, as independent evaluations have concluded.

Let’s just take the last headline above and look back at the real numbers behind the study. The researchers looked at cocoa flavanols and determined that if you ingest enough of them, you can reduce your risk of brain function decline.

Chocolate, fortunately, has a high content of these flavanols. But here is the catch: how much chocolate do you actually have to eat in order to reduce your risk of brain function decline?

All those extra calories and the sugar added to chocolate don’t contribute to good health, but do contribute to weight gain and potentially other health problems.

So this Valentine’s Day (or Thursday), you should go enjoy some delicious chocolate (I know I will), but just make sure you aren’t being fooled into thinking it is actually good for you.