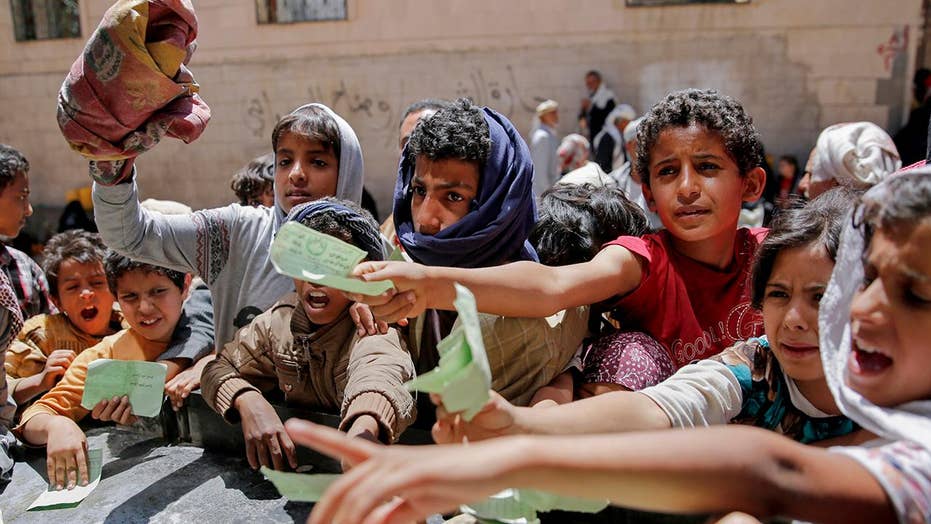 United Nations warns of looming starvation and the largest famine the world has seen in decades; Gillian Turner has the story for 'Special Report.'

Saudi Crown Prince Mohammad bin Salman, who met with President Trump at the White House Tuesday on his three-week visit to the U.S., is hoping to promote a new and modern vision for his country. But the specter of a potential famine that threatens millions of people in neighboring Yemen – brought on in large part by Saudi military policy – looms large over his visit.

The Trump administration has laudably tried to mitigate the Yemen humanitarian crisis, expanding aid efforts and occasionally criticizing aid obstruction by Saudi Arabia. But as the Saudis’ response to U.S. concerns continues to fall short, the crown prince’s visit marks an auspicious moment for the administration to take a more aggressive approach.

As a Republican and a Democrat who have served as senior U.S. government relief officials, we have managed innumerable humanitarian crises. We know that opposition to famine is bipartisan, and squarely within the U.S. national interest. And we also recognize the complexities of addressing relief needs amidst the deepening regional political tensions between Saudi Arabia and Iran.

Famine risks emerge when food supplies wither, household incomes collapse, and disease preys upon a weakened population – and when politics get in the way of addressing those problems. This is the situation in Yemen today.

Long the poorest country in the Middle East, Yemen has been ravaged by over 1,000 days of conflict. The coalition led by Saudi Arabia and the United Arab Emirates intervened in 2015 to attack Iran-supported Houthi rebels who had forcibly and illegitimately seized control of Yemen’s capital, Sana’a.

Thousands of civilians have since been killed – by Saudi Arabia’s reckless aerial bombardment, by the Houthis’ vicious siege of the town of Taiz, and by indiscriminate attacks by all sides.

Three years of this war have destroyed millions of Yemenis’ access to clean water, lifesaving medicines and sufficient food. Preventable diseases abound, including the worst modern outbreak of cholera, with over 1 million suspected cases, and rising reports of diphtheria.

Over 22 million Yemeni men, women, and children (over three-quarters of the country’s entire population) need some form of humanitarian aid. The United Nations’ top humanitarian official has said that famine in Yemen would result in “millions of victims.”

Amidst this grim backdrop, Saudi Arabia late last year imposed a total economic blockade on most of Yemen following a failed Houthi missile attack (likely with Iranian support) on the Saudi capital of Riyadh.

The blockade has sparked a rapid worsening of the humanitarian situation, leaving the majority of the Yemeni population cut off from the commercial shipments that supply the bulk of the country’s food, fuel and medicine. According to analysis from the U.S. government’s own Famine Early Warning System, sustainment of the blockade will push Yemen into a historic famine.

Preventing this famine will require that the Trump administration balance relief priorities with other important U.S. objectives, including Saudi Arabia’s legitimate right to self-defense against Houthi border attacks, rolling back Iranian influence in Yemen, restoring a legitimate government, and preventing illicit Iranian arms traffic. The importance of these goals was underscored by a recent U.N. panel of experts’ finding that Iran’s support to the Houthis is violating a U.N. arms embargo.

But condemning misbehavior by Iran should not deter the administration from also forcefully addressing problematic behavior by America’s friends. Allowing millions of combatants to suffer a severe famine does not advance U.S. or Saudi priorities.

The on-again, off-again Saudi blockade collectively punishes Yemen’s entire civilian population while simultaneously failing at its stated goal of stopping illicit arms flows. An effective tool for this already exists: a U.S.-backed UN inspection mechanism for large commercial shipments that has been in place for several years.

Reliable reporting indicates that arms trafficking occurs predominantly through small “dhow” boats and overland smuggling, neither of which are likely to be affected by the current blockade. And maintaining the blockade, ironically, diverts public attention (and blame) from the Houthis’ own share of responsibility for the humanitarian situation.

The life or death stakes for millions of Yemeni civilians should impel the Trump administration to move past quiet diplomacy during the crown prince’s visit this week. The urgency of permanently ending this blockade must be a top priority message.

President Trump’s statements on this in December were a strong and important starting point, but it is time to go further. The Saudis responded to those comments with a highly publicized “humanitarian plan” for the Yemen, complete with an expensive promotional campaign orchestrated by a British public relations firm. Look past the PR razzle-dazzle, however, and there is less to this than meets the eye.

The Saudis’ current proposals for expanding aid delivery contain elementary flaws – which is not surprising, as they were not coordinated with the very aid groups that actually deliver aid in the country.

But most damningly, rather than lift the blockade, the Saudis merely suspended it for 30 days. This is only marginally better than nothing: ambiguity around the blockade’s future still badly disrupts the commercial food imports on which Yemen depends.

Food importers plan and finance shipments months in advance, and cannot secure market financing if there is uncertainty over port access. Temporary blockade suspensions will not avert a famine. They indicate that the Saudis are still not serious about alleviating the humanitarian crisis.

Halting the slide into famine will require much more. The Trump administration should convey a clear demand that the crown prince fully and permanently lift the blockade and enable the complete and unhindered flow of humanitarian and commercial shipments of food and medicines into Yemen.

The U.S. should make clear that maintaining the blockade is unacceptable and undermines our partnership with Saudi Arabia, and state explicitly that considerable U.S. support for the Saudi military – particularly U.S. arms sales and ongoing aerial refueling and intelligence-sharing – hangs in the balance.

U.S. pressure to date has prompted only modest action from the Saudis, and still no fundamental changes to the destructive policies that are starving millions of civilians in Yemen. A famine can still be prevented, but only if the Trump administration lays out tangible consequences – now – for Riyadh.

Millions of innocent lives hang in the balance.