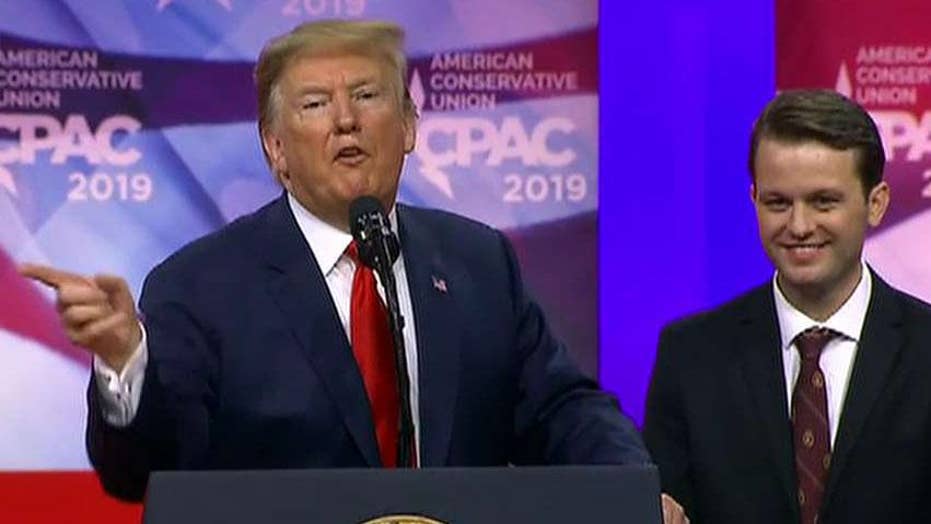 Hayden Williams on receiving praise from the president.

The mainstream media is having fun covering President Trump’s two-plus hour speech at CPAC Saturday.  Some are characterizing it as “profane,” and others as “rambling.” Well, I watched it and I would characterize the president’s speech as something quite different:

It was the moment I’ve been waiting for.

During those two very candid, and almost completely unscripted hours, where the president just stood and talked to supporters, one of the most significant moments (and you know it is significant because the mainstream media isn’t covering it) was when he brought Hayden Williams up onstage to discuss the recent violent assault he suffered at the University of California, Berkeley.

On Friday, February 22, Williams, who works for The Leadership Institute, was helping our organization, Turning Point USA, by volunteering to recruit members on the UC Berkeley campus.

In the course of sharing ideas and collecting contact information from interested students, Hayden was violently assaulted in an incident captured in full on video. The assault was unprovoked -- unless free expression is considered provocation on the UC-Berkeley campus -- and directly witnessed by numerous bystanders.

Big universities and big government have been joined at the hip for decades and everyone from administrators to students have been fairly free to attack conservatives without much fear of reprisal. This executive order can change all of that.

It took authorities a week, but on Friday they finally arrested a suspect, 28-year-old Zachary Greenberg, and have charged him with assault with a deadly weapon and attempting to cause great bodily injury.

He should also be charged with a hate crime.

Now, back to our president and his Saturday speech. With the black-eyed Williams standing at his side, the president promised to sign an executive order to address the intolerance and repression on college campuses that is experienced by conservative students and organizations.

This is not a “both sides do it issue.” This kind of thuggery from students, activists, professors, and administration officials is a product to which team left exclusively holds the patent.  It is the exact reason I formed TPUSA back in 2012.

To have the president of the United States commit to uphold yet another campaign promise and address it is an inflection point in the organization’s mission.

The issue of discrimination and intimidation on college campuses is something about which I have written two books, published tens of thousands of column words, and have lectured on from podiums all across the country for most of this decade.

From the 1960s forward, the people who are hostile to free markets and First Principles have been using the “academic setting” of the college campus where ideas are “freely exchanged” to promote only one point of view and to attempt to silence and eradicate the other.

Colleges are the production center of globalist ideas, of socialist ideas, and of general propaganda on anything from climate change to identity politics.

I cannot begin to tell you the number of parents I have talked to over the past several years who tell me that when their child entered college, they seemed to have solid American values.  However, when they exited college, they hated everything from Christopher Columbus to the gas-powered engine.

For the president to step in on this and bring not just the law but attention to what is going on within our university system can be a complete game-changer.

Big universities and big government have been joined at the hip for decades and everyone from administrators to students have been fairly free to attack conservatives without much fear of reprisal. This executive order can change all of that.

Since TPUSA started we have experienced aggression in almost every form.  We have had universities deny our charters, we have had our students at information tables called racists and other vile terms, we have had our representatives threatened with violence.

We have even had a volunteer punched right in the face in front of a nation of witnesses.

Our marching orders to our students and volunteers have been strict. We do not retaliate. Channeling Socrates, we respond to hate with questions. When universities deny us our rightful place as a campus organization, we work with counsel to fight the battle within appropriate channels.

Yet, with all the gains we have made in terms of campus presence we have still been operating without any form of air cover. The president of the United States is about to send some for us. Now watch what we can do.

There are two things I believe to be true. The first is that most Americans actually know that college campuses are extremely one-sided and are feeding a biased and uninterrupted stream of information to students.

The second thing I believe is that while they know, they really don’t fully appreciate just how powerful it has been. It’s easy to allow yourself to think that “This is bad, but kids are smart. They will figure it out for themselves.”

Well, that’s the problem. The years spent in college are perhaps the most formative in terms of shaping a person’s view of what the world should look like; what is just and unjust.

Under the university theme of collective choices are good and in the public’s interest, while individual choices are purely selfish and destructive to others, we have produced graduating class after class that goes out into the world determined to right the many wrongs of the United States.

Do you think Rep. Alexandria Ocasio Cortez is an anomaly? She isn’t. She’s a prototype.

If the president can level this playing field, you will see a change in America that is going to be generational.

At TPUSA, like with other campus-based organizations focused on liberty and free markets, we don’t want to indoctrinate anybody. We just want to be free to engage in the world of ideas. We are confident that if given that opportunity, we will win the engagement.

My gratitude to the president for his promise of an executive order on free speech is profound.

I will say this directly: Mr. President, if you need any input while drafting that executive order, I’d be happy to share some thoughts.

I’ve been spending a few years on the front lines. I’ve got a couple of ideas worth sharing.