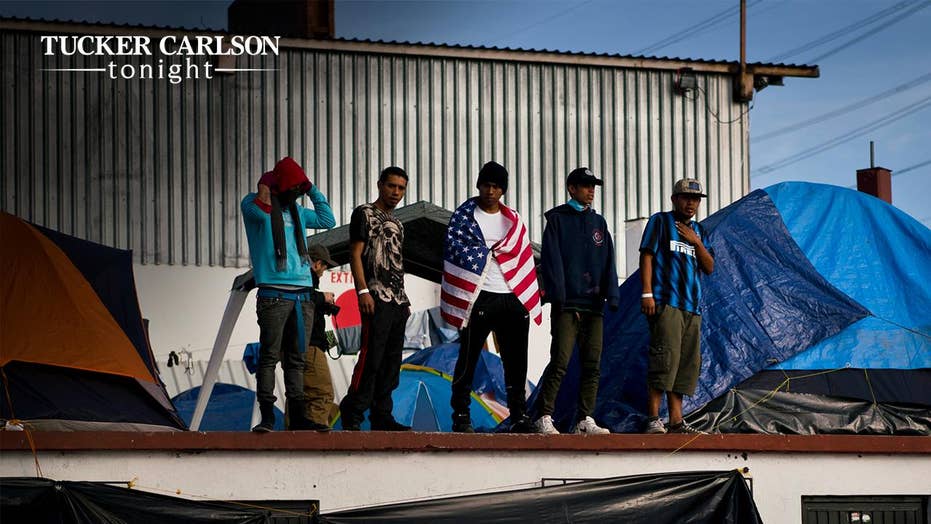 On Tuesday, Tucker Carlson reviews the impact of the caravan in Tijuana. Then later, Tucker reacts to the Russia probe memo on Michael Flynn recommending that Flynn should not get prison time. Plus: Outgoing Senator admits Justice Brett Kavanaugh accusations were mishandled.

For more than a year now, the media storyline on immigration has been as mindless and predictable as a Jim Acosta script.

The talking points never change, it doesn’t matter what the story is. It could be the caravan. Or family separation. Sanctuary cities. Even MS-13.

The details are irrelevant. Immigration is always good, whether it’s legal or not because immigrants are always good.-- It doesn’t matter where they’re from or how much English they speak, or how they’ve lived their lives or what they’ve done before.

Immigrants are the heart of America. By definition, they’re impressive, much more impressive than actual Americans, most of whom are fat and racist. That’s Jim Acosta’s position. Or it was. You may have noticed that the other channels suddenly seem less eager to talk about immigration. They are de-emphasizing the issue. Why is that?

Part of the problem may be the caravan – which actually exists and is in Tijuana, Mexico right now. Now, this should be good news for Mexico. If there’s one thing we know about penniless Central American immigrants, it’s that they found a huge number of wildly successful tech startups, they’re at the heart of your economy.

And yet, the citizens of Tijuana don’t seem grateful for their presence. Instead, they look highly annoyed that their city’s been invaded by strangers. As the city’s mayor noted, when people enter your country illegally, many of them are criminals:

“These people are coming in violently, unrespectfully, not as good law-abiding citizen and that is what hurt us …It’s not all of them but yes a lot of them are not really nice people who want to work, who want to integrate into our economy, they are just troublemakers.”

“A lot of them are not really nice people, they’re troublemakers.” Imagine an American mayor saying something like that on television.

And it got more intense from there. Monday night on this show, a Tijuana city councilman told us that the government had to intervene recently to keep Mexican citizens and the caravan members from throwing rocks at each other:

“We had to bring them over here because the neighbors from - from that - from that part of town, it's called Playas de Tijuana, it's like Tijuana by the sea, they were getting mad and they even started throwing stones at each other.  So, we carried them over here like 360 but things got out of hand because it kept growing and growing.”

LAJEUNESSE: Should this caravan have been stopped at the Guatemala border?

TIJUANA MAN: Of course. I agree with that a hundred percent. They should have

SECOND TIJUANA MAN: Your country has to beware of these people because there are bad people.

THIRD TIJUANA MAN: They don't belong here. They're migrants. It's the same case as when Mexican migrants go to the US and they're undocumented…

TIJUANA PROTESTER:  We do know of incidences of Tijuana and other cities that these people in the caravans are committing crimes … This is not about racism. We don't dislike a certain group of people because they're from another country. We're here because our government has not taken control of these what we call invasions.

Now if you’re CNN, or MSNBC or NBC News or ABC News what do you do with an interview like that? You can’t put it on the air because it doesn’t make sense, according to the rules you’ve established. You can’t really argue that Mexicans are anti-Hispanic racists, that’s what you call everyone else who is opposed to immigration, so what do you do? Well, you just pretend that none of this is happening. It’s not real. And that’s what they’re doing. But that won’t work forever. People tend to notice obvious things, they can’t help it. And if they keep noticing obvious things, their views change. And that’s why the consensus on immigration is changing fast.

Even Hillary Clinton and John Kerry recently warned that mass immigration can destabilize countries, as it’s done in Europe.

A new analysis of census data shows that sixty-three percent of non-citizens in the U.S. receive some kind of welfare benefits. That’s not what they told you. But those are the numbers. – From the census. Even among legal immigrants, the best kind, the ones who become naturalized citizens, fully half are on government assistance. By the way, that’s well above the native average.

Every night, hundreds of thousands of our citizens, Americans, sleep outdoors on the street, they’re homeless. The country’s middle class is shrinking and dying younger. The third year in a row. Again, these are American citizens. Some of them probably think they should have first dibs on help from the government, but they’re not getting it.

And by the way, looking forward here’s a question that no one is considering. Will the mass immigration we’re watching now make this country richer or poorer?

In fact, the majority of our immigrants have only a high school education or less. Many of them know very little English, some not at all.

Now, that was a difficult problem to solve a hundred years ago during our first major wave of immigration. But consider what it means now, at a time when automation is killing entire sectors of our economy, how are immigrants, with low levels of education and low levels of English supposed to succeed in an increasingly high-tech, skills-based economy? And by the way, how about are our own vulnerable workers, do they benefit from the presence of these immigrants?

We’re going to try again anyway to have it.