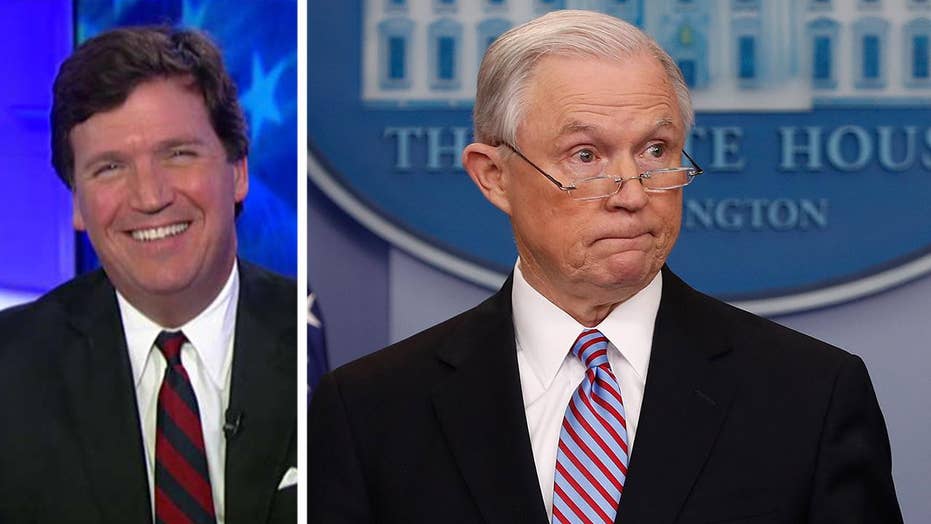 Tucker: Sessions never forgot why he was in the Cabinet

In a Trump administration hit by leaks, infighting and people looking out for themselves, Sessions fought to make America a better country.

There are always aftershocks immediately after campaigns. The first one of the 2018 mid-terms arrived pretty quickly on Wednesday afternoon. The president fired his Attorney General: Jeff Sessions.

For more than a year, the president has publicly criticized and ridiculed Sessions, so it was not very surprising.

Now, the president has the ability to replace Sessions with a new appointment since Republicans held the Senate, clearly, he saw no reason to keep him around.

Now, in theory, going forward, Jeff Sessions could challenge Doug Jones in 2020 to reclaim the Alabama Senate seat that he gave up to serve the president as Attorney General. If he did that, he'd almost certainly win. He's one of the most popular people in the state.

We asked a source close to Sessions about that and he said that's probably not going to happen. Sessions will probably just retire into private life. And if he does that, of course, we will wish him the best. But it will be, and we should say this, a loss for the country.

Donald Trump's longshot presidential campaign succeeded because he promised what so many voters wanted and, yet, what so few politicians were willing to campaign on because they are cowards.

Among his many promises, the most important was his pledge to reverse decades of deliberate neglect and treat our national borders like they're real, like our country matters. Nobody understood that message better than Jeff Sessions. He understood it immediately.

He was one of the president's first and most unwavering supporters, I think the first in the Senate, and it was because of immigration.

When the president took office, he gave up an essentially lifetime post representing Alabama to help fulfill Trump's mission.

Sadly, the country was going another way. Within about five minutes of the 2016 election, Democrats decided their defeat was not about immigration or an abandoned middle class. It was instead, you'll remember, about Russia and the conspiracy between Vladimir Putin and Trump.

Now, Republicans said they didn't believe that story. And yet, for some reason, many of them allowed Democrats to reframe the entire political debate in the country and make Russia the single biggest issue in American politics.

But Jeff Sessions did not fall for that. He never let himself get distracted from the mission at hand. While everyone else obsessed over dossiers and FISA warrants, Sessions worried about the mission he was hired to do.

He introduced a zero-tolerance approach to immigration prosecution. He treated illegal entry into the United States as a crime because it is a crime. His DoJ issued new opinions to restrict the exploitation of asylum laws in this country.

He fought to strip federal funding from sanctuary cities.

Courts ruled against him but he did everything he could to get those things done. His epartment accelerated the hiring of immigration judges, didn't get a lot of attention, but it's a big deal. More cases can be heard and deportations can take place more quickly.

That's a service to America and also, by the way, to the people being held.

On DACA, Sessions' refused to defend that program, which is unconstitutional, really, and induced the president to end the program.

Sessions wasn't just effective at immigration though. He rolled back the Obama administration's soft-on-crime policies across the board.

He pursued tougher penalties for drug dealers that earned the condemnation not just of liberals but of wealthy libertarians, who decided the war on drugs was a total disaster.

This, at a time, when more people were dying every year of drug ODs than died during all of Vietnam. But the decadent decided, "Oh, it's immoral to prosecute drug dealing." OK. The population knew differently because their relatives were dying.

Of course, Sessions also ended the Obama administration's harassment of local law enforcement that helped drive a surge in violent crime in major cities. -- If you live in one, you know what we're talking about.

Sessions did all of this even as the president who appointed him attacked him in public.

Those attacks started more than a year ago after one of the president's public rebukes. We traveled with Sessions, just by chance, to El Salvador where he was pushing a fight against MS-13.

Sessions made it clear he was in the cabinet to get results and would serve as long as the president would have him.

Here’s this exchange from our interview with him:

CARLSON: He [President Trump] has said again and again in many different forms throughout this barrage that you should have acted differently, you should have not recused yourself from oversight of the Russia investigation. Do you agree with that?

JEFF SESSIONS, FORMER UNITED STATES ATTORNEY GENERAL: Well, you know, I understand his feelings about it because this has been a big distraction for him. But, Tucker, I talked to experts in the Department of Justice, people who have trained in that. I'm confident I made the right decision.

CARLSON: You said the criticism was hurtful, and the president has made it really clear that he doesn't seem to want you to run the Department of Justice. Will you continue to run it?

SESSIONS: Well he can make that clear at any time. I serve at the pleasure of the president.

SESSIONS: If he's -- he wants to make a change, he can certainly do so and I would be glad to yield in that circumstance. No doubt about it.

Sessions wasn't perfect, obviously. He never seemed like an especially good administrator of a large agency. He sometimes got rolled by his staff. The Russian investigations have shown that FBI and DoJ are deeply politicized. And Sessions never seemed to fully get a handle on the permanent bureaucracy beneath them.

But if you take three steps back, here's what you see: In an administration beset with constant leaks and infighting, and people looking out for themselves and only themselves, Sessions was may be one of the very few people who never forgot why he was there, to make America a better country.

We can only hope that his replacement will do the same.