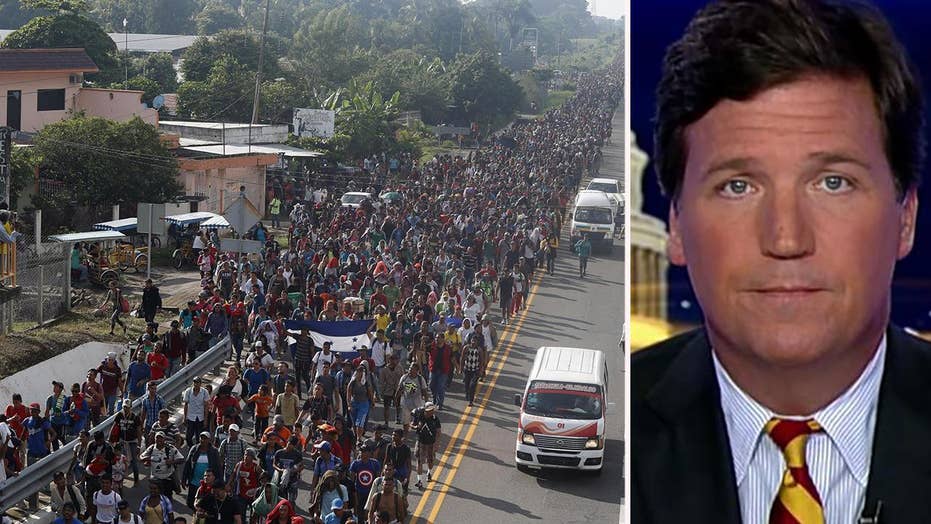 Tucker to critics: We are not intimidated

We’ve talked a lot on this show about the threat to free speech. It turns out it’s very real.

Here’s one example: Last week, we interviewed a man named Genaro Lopez. Lopez is an elected official in Tijuana, Mexico. He’s exactly the kind of person you’d think a lot of American journalists would want to talk to. For months, the media have demanded that the migrant caravan from Honduras must be admitted into the United States. Once it gets here, they’ve told us, our country will be greatly improved by its presence. That’s how immigration works.

OK. It turns out we can test that hypothesis. That very same caravan, the one they’ve been telling you about, is now encamped in Tijuana. It’s been there for weeks. Simple question: Has the caravan made Tijuana better? Genaro Lopez would know the answer. His job is to represent the citizens of that city. We’ve invited Lopez on twice to ask about the caravan. He’s some of what he told us.

I asked him, "Behind you it seems that somebody's cleaning up garbage. Is there a lot of trash there?"

That was on December 3. Ten days later, we invited Genaro Lopez back on to the show to see how Tijuana was doing.

Nobody else in the media seemed interested in what had happened to the caravan. As long as the migrants remained in Mexico, they couldn’t really be used to attack Donald Trump. So the press moved on to the next dumb, shiny thing. But we were interested. Here’s what Lopez told us:

"Things aren't getting better. They're probably getting worse," he said. "Last weekend, we issued an ultimatum to all the Hondurans and Guatemalans that are camping out here on the street. They're blocking the street. And they're bringing all their necessities, trashing the street. ... Problems are still going on. There's been like 280 arrests. Before, it was solely for drug possession and being drunk in the streets. Now, it's for breaking and entering into homes."

Trashing the street. Doing drugs in public. Blocking traffic. Breaking into homes. That’s not at all what CNN promised us.

Was Genaro Lopez one of those white nationalists the New York Times is always warning us about? Did he make the whole thing up, pictures and all, for his own sick, bigoted reasons?

Possibly. Or maybe, and this was our conclusion, there could be a lesson here for the United States. Here’s what we said that night on the show:

"Our country's economy is becoming more automated and tech-centered by the day. It's obvious that we need more scientists and skilled engineers. But that's not what we're getting. Instead, we're getting waves of people with high school educations or less. Nice people, no one doubts that but as an economic matter, this is insane. It's indefensible, so nobody even tries to defend it. Instead, our leaders demand that you shut up and accept this. We have a moral obligation to admit the world's poor, they tell us, even if it makes our own country poorer and dirtier and more divided."

In a fast-evolving economy, it could be preferable to import more engineers, and fewer people with low skills, no matter how nice or well-meaning those people might be. And we always assume they are.

That’s what we said. That was our claim. And it’s hard to argue with that. In fact, nobody on the left did argue with it. They ignored it. Instead, they zeroed in on the last line: “The left says we have a moral obligation to admit the world's poor, even if it makes our own country more like Tijuana is now, which is to say poorer and dirtier and more divided.”

That’s what we said. It’s true. Ask Genaro Lopez. Thanks to the efforts of the American left, he and his city are living with the consequences. But precisely because it is so obviously true, saying it out loud is a threat. Our immigration policy exists for the profit and the comfort of a relatively tiny number of people. Everybody else gets shafted, including Genaro Lopez and an awful a lot of people just like him. Meanwhile, the people profiting from the policy don’t want the rest of us to think about it too much. They want us just to mouth the empty platitudes and move on. Nothing to see here. Shut up and go away.

Those who won’t shut up get silenced. You’ve seen it a million times. It happens all the time. The enforcers scream “racist!” on Twitter until everyone gets intimidated, and changes the subject to the Russia investigation or some other distraction.

It’s a tactic. A well-worn one. Nobody thinks it's real. And it won’t work with this show. We’re not intimidated. We plan to try to say what’s true until the last day. And the truth is, unregulated mass immigration has badly hurt this country’s natural landscape.

Take a trip to our southwestern deserts, if you don’t believe it. Thanks to illegal immigration, huge swaths of the region are covered with garbage and waste that degrade the soil and kill wildlife.

The Arizona Department of Environment Quality estimates that each illegal border crosser leaves six to eight pounds of trash during the journey into our country. If you’re interested in more detail, look at the website they’ve created, it’s called Arizona Border Trash. It’s dedicated to highlighting and cleaning up the thousands of tons of garbage strewn across Arizona by immigrants every year.

Illegal immigration comes at a huge cost to our environment. The Government Accountability Office (GAO) put it this way: “Illegal border activity on federal lands not only threatens people, but endangered species and the land itself. Illegal aliens and smugglers have destroyed cactus and other sensitive vegetation that can take decades to recover, including habitat for endangered species. One land management official described another federal property on Arizona’s border as so unsafe and with resources so destroyed that it is now primarily used for illegal activities and no longer visited by the general public.”

Keep in mind this is not a press release from Donald Trump’s campaign team.That’s a federal study from 2002. That was back when people could do science without getting fired for it.

The left used to care about the environment - the land, the water, the animals. They understood that America is beautiful because it is open and uncrowded.

Not so long ago, environmentalists opposed mass immigration. They knew what the costs were. They still know. But they don’t care.

We do care. And we’re going to continue telling you about it. We think you have a right to know. No matter what they say.