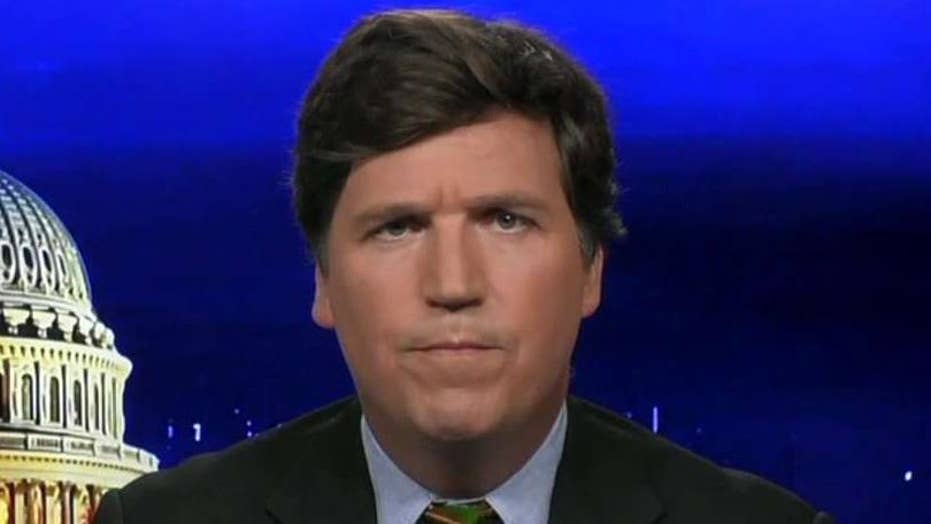 Tucker: If we erase the past, prepare for the consequences

Tucker's Thoughts: Slavery in undoubtedly evil. But remember George Washington, Thomas Jefferson and 41 of the 56 people who signed the Declaration of Independence owned slaves. Should we no longer preserve our institutions and just dismiss them as evil?

One thing President Trump said Tuesday deserves more attention than it will likely get.

On Monday a mob tore down a civil war soldier's memorial in Durham, North Carolina. Police stood idly by and liberals across the country applauded it. Which statues are next, the president asked today, George Washington, Thomas Jefferson?

It's not a joke. Suddenly it's a serious question.

Thomas Jefferson indisputably was a great man. He was the author of the Declaration of Independence. Founder of the University of Virginia and maybe, most importantly, the greatest thinker in American political history.

All of us live in his shadow. Unfortunately, however, Jefferson was also a slave holder. That's real. It's a moral taint. We ought to remember it.

But to the fanatics on the left it means that Jefferson must be purged from public memory forever. The demands are already coming that we do that.

In 2015, the students at the University of Missouri demanded the removal of a Jefferson statue. Two years ago, on CNN, anchor Ashleigh Banfield suggested the Jefferson Memorial in Washington might have to go. Needless to say there is literally no limit when you start thinking like this.

Last year, hundreds of activists in New York demanded the statue of Theodore Roosevelt at the American National History Museum be dismantled. They argued that Roosevelt was a racist.

That's the standard. Nobody is safe.

Watch out Abraham Lincoln. You're next.

Now, to be clear, as if it's necessary, slavery is evil. If you believe in the rights of the individual, it's actually hard to think of anything worse than slavery.

But let's be honest. Up until 150 years ago when a group of brave Americans fought and died to finally put an end to it, slavery was the rule, rather than the exception around the world. And had been for thousands of years, sadly.

Plato owned saves, so did Mohammed -- peace be upon him.

Many African tribes held slaves and sold them. The Aztecs did, too. Before he liberated Latin America, Simon Bolivar owned slaves.

Slave-holding was so common among the North American Indians that the Cherokee brought their slaves with them on the Trail of Tears. And it wasn't something they learned from European settlers.

Indians were holding and trading slaves when Christopher Columbus arrived. And by the way, he owned slaves, too.

None of this is a defense of the atrocity of human bondage. And it is an atrocity.

The point however is that if we are going to judge the past by the standards of the present. If we are going to reduce a person's life to the single worst thing he ever participated in, we had better be prepared for the consequences of that. And here's why: Forty one of the 56 men who signed the Declaration of Independence held slaves.

James Madison, the father of the Constitution, had a plantation full of slaves.

George Mason, the father of the Bill of Rights, also owned slaves, unfortunately. But does that make what they wrote illegitimate?

If these men were simply racist villains, and that's all they were, then the society they created is as evil as they were. There is no reason to respect its traditions or uphold its laws.

The First Amendment, for example, the right to speak freely -- For hundreds of years Americans have revered it. Now, the left dismisses it as the work of white supremacist slave holders. It is worthless, they tell us. It must go.

It's a statement of shocking ignorance and yet it is now common.

CNN's Chris Cuomo said it. He is supposedly a lawyer.

At Pomona College in California, students there are claiming that free speech is "a tool appropriated by hegemonic institutions."

Whatever that means. They say the right of free expression should only apply to certain racial groups.

But that's not racist because as you know there is no racism on the left.

They are just sincere people concerned about hate.

There is actually a vitally important debate going on in the country right now. And it's not about statues or even the alt-left antifa, it's about American institutions and whether they are worth preserving.

Radicals on the left want to tear it all down as they did the statue in Durham Tuesday.

Equality under the law.

Protections for the individual against the mob.

The absolute right to say and believe anything you choose.

Those will be gone. Replaced by something darker and more rigidly conformist.

Is that a country you want to live in?

If it's not, now is the time to speak up. elites are refusing to. They are too afraid.