Tucker: AOC has the cure for human extinction

There is always something a little poignant about the end of something. Maybe that's why people get drunk on New Year's Eve -- to forget it. It is sad to think that a whole year is over.

But if you think New Year's is depressing, how would you feel if you thought that all life on this planet was ending soon. Three million years of human history erased forever. Sad, isn't it? Chris Hayes thinks so. Chris Hayes is what every man would be if feminists ever achieve absolute power in this country -- apologetic, bespectacled and deeply, deeply concerned about global warming and the patriarchal systems that cause it.

On Friday, Hayes hosted a town hall event on MSNBC with Congresswoman Alexandria Ocasio-Cortez. It was designed to promote her Green New Deal. This apparently seemed like a wise idea to executives over at NBC. The very same news outlet that spent two years lying to you about Russia brings you a 29-year-old former bartender to teach you about science.

Hayes framed the terms at the outset of the show. Unless, you do exactly what Dr. Ocasio-Cortez says, the entire human race has only 12 years to live.

"What we have to do to avoid the most catastrophic effects of climate change is to cut emissions in half in 12 years," Hayes said. "Twelve years. That's the project we have been tasked with by the Earth. Now has come a bold new policy proposal that might be the most controversial thing in American politics at the moment. You've probably heard about it. It's called the Green New Deal. Some people call it a socialist monster; some people call it our only hope for survival here in the way of life that we hold dear."

Did you hear what he said? "Our only hope for survival." Holy smokes! That is terrifying. Help us, Chris Hayes! Where is this life raft? This humanity-saving antidote -- that alone can prevent the death of our children?

Well, the good news is that Alexandria Ocasio-Cortez has the cure for human extinction. All we have to do is obey her and be very, very good people.

"In my framework, it is my belief that we do not just have a wealthy society, but that we have a moral society," she said turning the town hall.

Wait a second, you may be wondering. How does a member of Congress who hasn't yet turned 30, someone who has never even raised children, get the right to lecture me about morality? Well, that's the difference between you and Alexandria Ocasio-Cortez. She is a highly decent person.

This is how she explained how she doesn't resort to ad hominem attacks, unlike her enemies -- who, by the way, are xenophobic, white supremacists.

"We are actually talking about something substantive. We are not calling anyone names," she said. "People say, 'Tea Party of the left,' and I find this phrase very interesting. Because the grounding of the Tea Party was xenophobia, the underpinnings of white supremacy."

Yes! Stop with the name-calling, you racist, white supremacist, xenophobe!

Alexandria Ocasio-Cortez has a constituency not because she is impressive -- she is not. But because she is one of the very few people who will say the obvious about growing corporate tyranny in this country.

So, it's official. Alexandria Ocasio-Cortez is a moron and nasty and more self-righteous than any televangelist who ever preached a sermon on cable access. She is not impressive. She's awful.

So how did she get so famous? Why do people like her? Well, if we are being honest, we've got to say it's because not everything she says is wrong. See how, in this same town hall, Ocasio-Cortez takes a break from her idiotic climate theology to offer what turns out to be a fairly insightful critique of the American economy.

"We have runaway income inequality. We are at one of our most in-equal points, economically speaking, in American history," she said. "We are dealing with a crisis of how our economy is even made up. Our economy is increasingly financialized, which means we are making profits off of interest -- off leasing your phone, off of doing all of these things. But we aren't producing, and we aren't innovating in the way that we need to as an economy."

Okay, you hate to admit it, given the source, but try to ignore the way she said. Maybe, just print it out and read it. A lot of it is basically true. 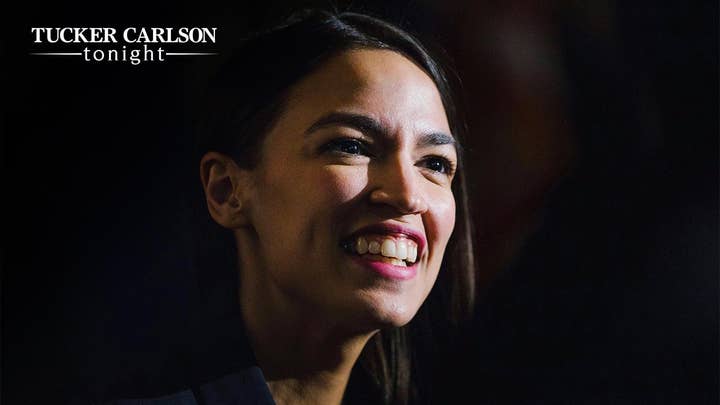 No other party wants to talk about this. The Republicans are in fetal position; they just don't want to be unpopular anymore. They will do anything not to be unpopular. The Democrats want what they have always wanted - total and complete control over you and this country. Neither party will say that our economy, at its core, is badly distorted. Any economy based on interest payments isn't really an economy. It's a scam.

Healthy countries innovate. They make things. They don't treat people like interchangeable widgets. They don't worship finance. In a healthy country, bankers aren't heroes. Private equity is not the highest paid profession. Nobody brags about working at a hedge fund. In America right now, we have the opposite, unfortunately. And that's why Alexandria Ocasio-Cortez has a constituency -- not because she is impressive, she is not. But because she is one of the very few people who will say the obvious about growing corporate tyranny in this country.

This doesn't mean she is right about anything else. Taking power from the banks and giving it to Ocasio-Cortez, as she proposes, would not solve our problems. It will just put an even dumber person in charge. But she is right about the financialization part.