Tucker: Democratic presidential candidates turn on one another ahead of Iowa caucuses

Elizabeth Warren denounces Bernie Sanders as a sexist, claiming the Vermont senator once told that her no woman could win a presidential election.

We want to bring you the latest on the Democratic Party, which -- because there is, in the end, justice in this world -- is coming apart before our eyes. What a spectacle it is!

The catalyst for the collapse is primary season that officially begins with the Iowa caucuses. -- That's fewer than three weeks away, so it's soon.

It seemed like just this morning that Sen. Elizabeth Warren of Massachusetts had been ordained the frontrunner and the likely Democratic nominee, but not anymore. In this environment, political fortunes can change overnight, faster than one's ethnic identity even.

Suddenly the Warren campaign appears to be falling apart. Her fundraising has tanked; she is badly behind in the early primary states. A recent Harris poll shows her in danger of dipping below 10 percent nationally. It's ugly.

And so, as she hurtles toward Earth, Warren has pulled her reserve chute: She is denouncing Bernie Sanders -- wait for it -- as a sexist.

Warren now claims that Sanders once told her that no woman could win a presidential election. Bernie Sanders denies saying this. So who is telling the truth?

Well, the Sanders campaign responded with this video of their candidate making exactly the opposite case decades ago.

Sen. Bernie Sanders, I-Vt.: The real issue is not whether you're black or white, whether you're a woman or a man. In my view, a woman could be elected president of the United States.

"A woman could be elected president of the United States." You just saw it.

The party is either going to nominate an elderly socialist or an elderly corporate shill who spent decades taking bribes from the credit card companies. Those are the choices. Democrats have reason to be nervous about that choice.

So has Bernie Sanders changed his mind about that? Elizabeth Warren claims that he has. The question is, is she telling the truth?

Let's review the evidence. This is the person who lied about her ethnicity in order to game the quota system at Harvard. This is also the person who made big money advising corporations on how to avoid paying the people they'd harmed, and then, once she'd cashed in doing that, built an entirely new persona as a ferocious consumer champion.

This is a person so synthetic and uncertain of who she is that she can't even drink a beer with her own husband without coming off like the captive in a hostage video.

Sen. Elizabeth Warren, D-Mass.: Hold on a sec. I'm going to get me a beer. Hey, my husband, Bruce, is now in here. You want a beer?

Bruce Mann, Warren's husband: No. I'll pass on the beer for now.

Warren: I'll pull up a stool and sit down.

Make a note to yourself and watch that video at least once a day. "I'm going to pull up a stool and sit down." How'd you like to have dinner with her? Terrifying.

And if you think that's the falsest thing you've ever seen, keep listening.

Here's Elizabeth Warren telling audiences how she was fired from her first job for the crime of getting pregnant -- because that's what life was like in America before pioneering feminists like Elizabeth Warren put everything on the line to change the rules. It was a hellscape right out of the "The Handmaid's Tale."

Warren: I was visibly pregnant. And the principal did what principals did in those days: Wished me luck and hired someone else for the job.

"Wished me luck." Exact same arm gesture, every time, a carbon copy. Watching that tape, you think how could we ever have believed she was going to win anything? How dumb are we?

And by the way, this scenario Warren just described never happened. She made it up. How do we know that? Well, because Elizabeth Warren herself told a very different story 12 years before.

Warren, in a video for University of California TV: I worked -- it was in a public school system, but I worked with the children with disabilities. And I did that for a year. And then that summer, I actually didn't have the education courses. So I was on an emergency certificate, it was called. And I went back to graduate school and took a couple of courses in education and said, I don't think this is going to work out for me.

And I was pregnant with my first baby, so I had a baby and stayed home for a couple of years. And I was really casting about thinking what am I going to do?

So it turns out they didn't actually wish her luck and fire her for being pregnant. What a fraud! What a liar. A phony. We can say that conclusively, so can a lot of voters.

So say what you want about Bernie Sanders -- we do regularly -- but he probably didn't attack Elizabeth Warren for "being a woman." There a lot of reasons not to vote for Bernie Sanders, but you have to be a shallow, lifestyle liberal to think sexism is one of them.

So where exactly does that leave us in the Democratic primary? Well, really with two options. The party is either going to nominate an elderly socialist or an elderly corporate shill who spent decades taking bribes from the credit card companies.

Those are the choices.

Democrats have reason to be nervous about that choice. Here's the latest, the not very reassuring development from Project Veritas. It is a newly released video. You have no reason to doubt it's true. We haven't verified it ourselves, but you can judge for yourself. 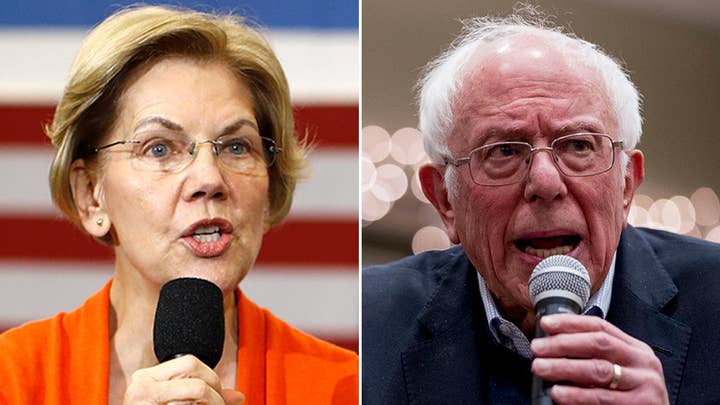 In it, a Sanders campaign organizer vows that if Bernie Sanders doesn't get the nomination, people are going to get hurt.

Kyle Jurek, field organizer for the Sanders campaign: If Bernie doesn't get the nomination or it goes to a second round at the DNC convention, [expletive] Milwaukee will burn.

That sounds like a good time. Blood in the streets.

Jurek: Germany had to spend billions of dollars reeducating their [expletive] people to not be Nazis. Like, we're probably going to have to do the same [expletive] thing here. That's kind of what all Bernie's whole [expletive] like hey, free education for everybody because we're going to teach you not to be a [expletive] Nazi.

"Reeducation." They're just confirming every suspicion.

So the candidate who honeymooned in the Soviet Union, we learn, employs campaign staff who are planning reeducation camps in the first term. Feel better?