Tucker: Not long ago this country actually enforced immigration laws

'Tucker Carlson Tonight' host sounds off on the White House's response to the crisis at the southern border, disregard for American worker

It's a disaster, and it's hard to believe that not so long ago, this country actually enforced its immigration laws. Not long ago at all. In fact, just two years ago, in August of 2019 federal agents kicked down the doors of seven separate chicken plants in central Mississippi. They arrested hundreds of foreign nationals who were living and working there in violation of American law. Several executives of the poultry plant were later indicted. Among the charges brought, child labor.

Headlines from our decadent corporate press corps portrayed the raids as "heartless" and "barbaric." A trade group called the National Chicken Council insisted that "the chicken industry uses every tool available to verify the identity and legal immigration status of all prospective employees." You expect to hear lies like that from an organization calling itself "the National Chicken Council," as well as from our corporate media. People who actually live in central Mississippi had a different view.

They'd spent years watching helplessly as foreign workers lowered the wages for people who are actually born there. They understood immigration, as most wage earners do understand immigration, primarily as an economic question. When you flood the labor pool, wages go down. That's called supply and demand.

Once the illegal workers were gone, those chicken plants were forced to hire American citizens. In this case, many of them were African American. So you'd think maybe the Biden administration, with its much-repeated commitment to equity, would think this is good, but of course, they didn't care. They're not interested in helping working-class people of any color.

Diversity consultants, Princeton professors, MSNBC contributors, transhumanist tech billionaires. Of course, those are their people. That's their main constituency, but blue-collar high school graduates who just want a decent hourly job. No, no chance. Not interested. So the administration promptly shut down all workplace immigration raids. Now, employers who hire illegal aliens to undercut American wages have the full protection of the Department of Homeland Security because it's not a corporate conspiracy or anything, don't you worry.

Now, the rest of the world is fully aware of this, they follow these developments, they have the internet too. As a result, a massive migrant caravan has formed in southeastern Mexico in the city of Tapachula. There is more footage tonight of the caravan heading here, smashing through police barricades.

Everybody sympathizes with migrants who want a better life in this country, of course. Our government's primary concern always must be the welfare of American citizens in a country that's rapidly getting poorer, which we are. But in general, you sympathize. But migrants who violently break through a police line. No, not allowed here, ever. There's no possible way the U.S. benefits from anyone who would do that. Period.

And by the way, in contrast to previous years, these migrants are not coming exclusively from Latin America. They're coming from as far away as China. And again, why wouldn't they come? The border is now open for everyone. It's not just Central Americans. Fox’s Griff Jenkins has been covering these caravans for years, and this weekend he went to southwest Mexico and immediately saw something very different.

Griff Jenkins: We’re in the town of Huehuetan, 16 miles north of Tapachula where this caravan started. // You can see them – children sitting on a swing set. Lot of families, lot of children. And we’re seeing migrants from many different countries. It’s not just Central America like we saw in 2019. We see Haitians in here and even one woman from China. We couldn’t speak to her because she didn’t speak Spanish or English. // Every migrant we talked to today said they’ve got one destination in mind: the United States. 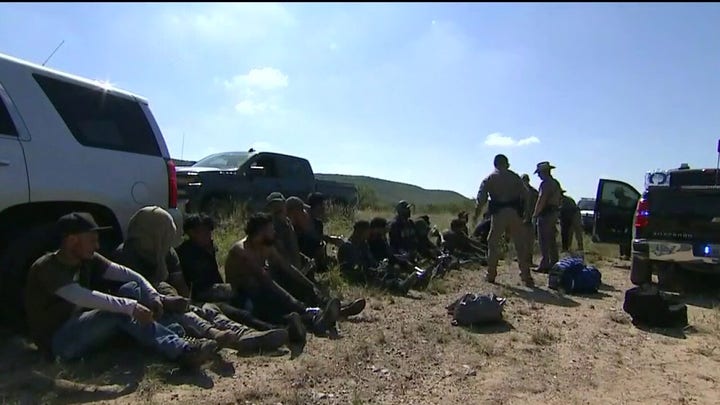 So why are they coming? We don't need to guess about that. Ask the people who are coming here illegally. They're not embarrassed to articulate it at all. They're coming because they know immigration enforcement under Joe Biden has been suspended in the United States. The White House hasn't simply ended workplace raids. They've also stopped turning people away at the border. So people just come in and they know they'll never be forced to leave.

Already, the administration has released more than 160,000 illegal migrants into the country, with no supervision whatsoever, without telling the people into whose neighborhoods they're moving because they don't care what American citizens think. By the way, how many are vaccinated? You can't go to events, you can't have a job in this country without being vaccinated, but if you come here illegally, no problem. What does that tell you? Now, tens of thousands of those migrants, according to documents obtained by Fox News, have already received work permits. Right. Soon they will receive free benefits and the health care that Joe Biden has promised them. That's why they're coming. Again, just ask them and they'll tell you.

Reporter: Why now? Man: It is the best time. Reporter: Because of the administration? Man: Because of Joe Biden

Because of Joe Biden, it's really that simple. At the same time, you should know that Biden has ordered the government to build a wall around his family's vacation home in Delaware and build it at public expense. Diversity may be our strength, he often says that, but Joe Biden doesn't want it anywhere near him or his family. Now, the irony of that is almost difficult to digest. Was just a year ago that Biden was telling us that walls are immoral and that's why he would never build a wall.

Joe Biden, August 2020: There will not be another foot of wall constructed on my administration.

Oh, except around my vacation house in Delaware. Hypocrite. But it's more than hypocritical. It's criminal and not in a rhetorical sense. Joe Biden is actively and intentionally breaking federal law, even as he works to protect himself and his own family from the consequences of these lunatic policies.

Presidents have been impeached for less than that. In fact, no American president who ever has been impeached, not Andrew Johnson, but Richard Nixon, not Bill Clinton. Not even Donald Trump has ever even been accused of crimes this flagrant or this serious, not even close.

According to new court documents, between Jan. 20 and the end of March, just, for example, the Biden administration refused to take custody of 37 illegal immigrants in the state of Texas. Many people had additional criminal records. According to an affidavit from a Texas sheriff, the administration refused to detain even suspects believed to have committed aggravated sexual assault and narcotics violations at the height of a drug epidemic that's killing almost 100,000 Americans every year. So it's really clear this is not simply an incredibly dangerous and destructive policy that intentionally hurts America, and it is that. No, it's more, though. It's an unequivocal violation of federal statute. It is, in other words, a crime. It's a crime.

Section 236(c) of the Immigration and Natural Nationality Act requires federal agents to quote, detain and hold any alien who is released from criminal custody if the alien entered illegally and is removable on any of the criminal grounds of admissibility, or if the alien entered legally and is removable and most all of the criminal deportation grant. Got that? 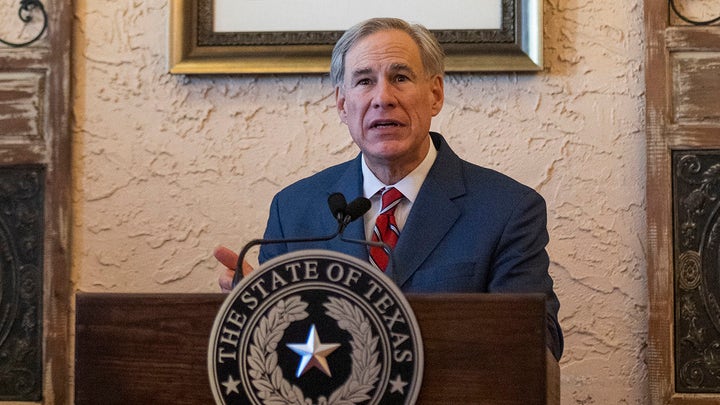 In other words, for the safety of American citizens, of course, and every country has laws like this, the U.S. government is required to arrest and hold criminal aliens and deport them. But Joe Biden has refused to do that. He is breaking the law right out in the open.

So why hasn't he been impeached? Not because he has bad character or is senile, but because he is breaking federal law. Not long ago, Joe Biden would have been impeached for that. Even Democrats understood not so long ago that immigration law is fundamental to any country.

Nancy Pelosi, 2005: It is our obligation as elected officials to keep the American people safe and our borders are our first line of defense. // Democrats support also enforcing laws, current laws, against those who came here illegally and those who hire illegal immigrants. // Chuck Schumer, 2009: The only way that we will stop the flow of illegal immigration into this country is tell those who hire them that they no longer can.

MIGRANT CARAVAN CONTAINING THOUSANDS TRAVELS THROUGH MEXICO TOWARD US BORDER: 'TELL BIDEN WE ARE COMING'

That was before the Democratic Party decided to wholeheartedly embrace its role as corporate toadies and before more significantly, they decided it's too hard to convince the population that our policies help them because in fact, they don't help them at all. It's much easier to guarantee that we'll be elected into perpetuity by importing a whole new population of voters, and that's exactly what they're doing. And they bark like dogs when you say it because it's true. But that was their position then, in fact, was the Democratic Party's official position. 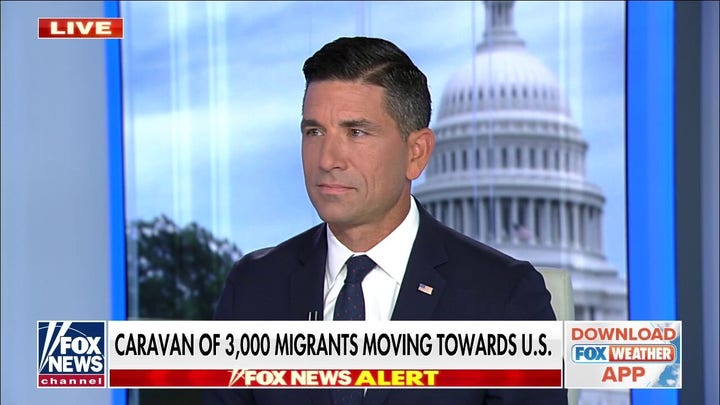 Joe Biden, 2006: The Democratic position also recognizes you've got 11 million illegal aliens here. They have to have a way to earn their way into the deal. This isn’t amnesty. They're required to take 11 years' worth. They pay a fine. They've got to learn to speak English. They've got to pass tests.

Chris Matthews, MSNBC Host: Yes. If we want the problems of Canada right now, just keep encouraging people to keep their foreign language. English is going to unite this country potentially. It always has in the past.

Biden: You're quite right. I can't think of a country that has two languages as their accepted languages that is doing all that well, including Switzerland and/or Canada.

Well, that was a completely different Joe Biden. In fact, someday, we're going to spend an hour playing you tape from Joe Biden five years ago, and you can decide how he's doing now. But that point, that a divided country is united by language – it's true there is no country in the world that remains united, but has different languages, period, and that's a central fact of life. And everyone, just a few years ago understood that. Now Joe Biden and the party he leads have decided that really nothing matters, including who lives in the United States. And amazingly, some Republicans in the Congress appear to agree.

This article is adapted from Tucker Carlson's opening commentary on the October 25, 2021 edition of "Tucker Carlson Tonight."