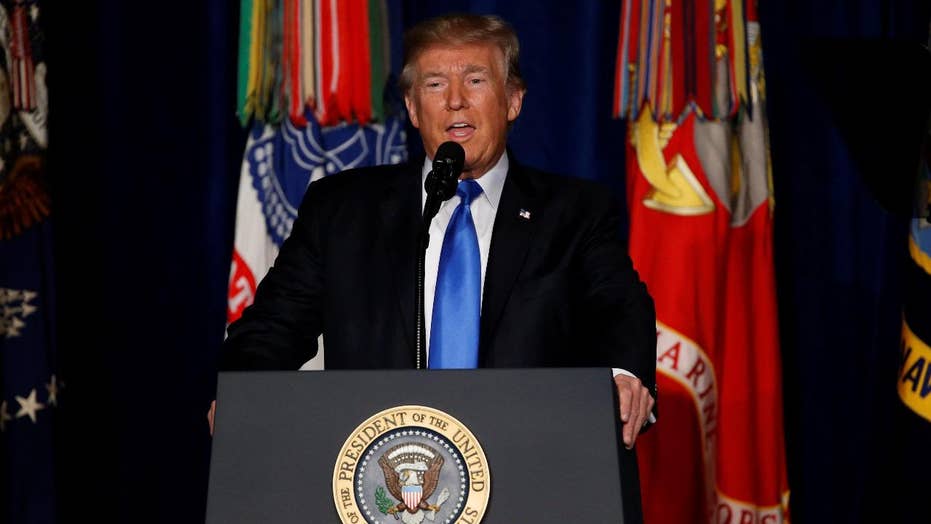 President unveils new strategy, says his 'original instinct was to pull out'; reaction and analysis on 'The Five'

President Donald Trump has now officially embraced and expanded the 16-year-old war in Afghanistan which candidate Trump denounced as a waste of American blood and treasure.

In his first major foreign policy speech in prime time, Mr. Trump unveiled what he called a new strategy for Afghanistan and South Asia, which he called “principled realism.” But many of its key components remain infuriatingly vague, such as the number of additional troops he intends to deploy in Afghanistan and how much more money -- if any -- he intends to spend there. Moreover, some of the goals he espoused Monday night seemed inherently contradictory.

Officials said that the president had chosen among three main options. A substantial surge of forces comparable to President Bush’s surge of forces in Iraq – a commitment which stabilized the country until President Obama’s abrupt withdrawal of them – was not on the table.

Mr. Trump did explain, with admirable candor, why he had abandoned his initial “instinct” to withdraw the 8,500 American forces deployed in Afghanistan immediately. He said that after listening to the generals whose wisdom and views he had denigrated as a candidate, he had become convinced that an abrupt withdrawal would create a vacuum that the Islamic State, the Taliban, and other terrorists would fill. That, in turn, he said, would enable America’s Islamist foes to strike America and its allies, as Al Qaeda had done on September 11th from Taliban-ruled Afghanistan. Mr. Trump is right about that. And has apparently learned from Barack Obama what the lesson of an abrupt withdrawal from a counter-terrorism war can mean for American security.

He also seemed determined to do more to prevent Pakistan from giving the Taliban aid, comfort and sanctuary. He also wisely mentioned India in a thinly-veiled threat to Pakistan. A senior administration official said that several weeks ago, for instance, Mr. Trump had lifted restrictions that his predecessor, President Obama, had imposed on the use of U.S. forces, enabling U.S. commanders on the ground, among other things, to attack such sanctuaries in Pakistan. The official said the administration would use economic leverage (foreign aid) and diplomatic pressure to convince Pakistan to become part of the solution, rather than the problem. It's hard to see how they can win. But Presidents Bush and Obama also tried to persuade Pakistan to switch course, without success. And some military analysts were quick to note that American forces in Afghanistan are supplied mainly through Pakistan. So it’s hard to see how the U.S. forces deployed there can fight, much less win the war without Pakistani cooperation and support. Openly courting India, Pakistan's historic rival, could backfire but may be worth the risk.

Mr. Trump said his administration would no longer engage in “nation-building,” another good step. He also said that the Afghan government in Kabul would have to do more to ensure that Afghans do the bulk of the fighting. While he vowed to stay in the region to kill terrorists and defeat the Taliban who support the Islamists until “victory” was achieved, he also said that America’s commitment to Afghanistan was not “open-ended.” He did not define what “obliterating ISIS” or “victory” meant, or specifically what conditions on the ground would enable an eventual withdrawal of American forces.

While saying that America’s military presence in the region would be “conditions” not “calendar-” based – an implicit criticism of President Obama’s commitment of more U.S. soldiers to the Afghan fight but only for 18 months – Mr. Trump declined to articulate what he intends to do, or how he would “win” and defeat Islamist terrorists if the Afghan government crumbled or remained riven by the factionalism and corruption which has hampered the war effort so far. He said that America’s commitment was not “open-ended,” and that America would no longer give Kabul a “blank check,” but did not say how America would defeat ISIS, Al Qaeda, and the indigenous Taliban if the Afghan army did not start performing more effectively.

A senior official, briefing reporters on the president’s speech, said that the administration hoped that reversing recent Afghan losses by increasing the number of Americans who are training, advising and assisting the Afghan army, and especially its special forces, would convince the Taliban that a negotiated settlement was the only way to prevent military defeat. But it is unclear whether the deployment of some 4,000 more U.S. forces can succeed in reclaiming the 30-40 percent of Afghanistan the Taliban are now said to control. “How can 4,000 more forces do what 100,000 American forces could not?” said Les Gelb, a former president of the New York-based Council on Foreign Relations, referring to the number of forces stationed there during the height of America’s involvement. “You can’t win this war with more American troops. But instead of getting better, Afghan forces are getting worse.”

Speaking on background, officials said that the president had chosen among three main options his military advisers had prepared for a final decision last Friday at Camp David: to withdraw forces quickly, to conduct a mercenary war by transferring major responsibility for the fighting to private contractors, and a modest increase in American forces for an unspecified amount of time. A substantial surge of forces comparable to President Bush’s surge of forces in Iraq – a commitment which stabilized the country until President Obama’s abrupt withdrawal of them – was not on the table, the official said. But while President Trump and his senior aides spoke about their desire to integrate military, economic and diplomatic efforts to defeat terror, how is that goal advanced by the savage cuts Mr. Trump has proposed to the State Department’s budget or the hundreds of key diplomatic posts that have gone unfilled?

The final reason Mr. Trump gave for remaining in Afghanistan was to honor the sacrifices of the more than 2,200 Americans who had already died there. This seemed eerily reminiscent of the justifications his Democratic and Republican predecessors gave for continuing the war in Vietnam. President Trump may have wisely learned not to repeat President Bush's and Obama's mistakes in Afghanistan but sacrificing more Americans to a fight that may not be winnable without a clear new strategy and benchmarks honors neither those who have died nor history.

Ultimately, this most unconventional of presidents has proposed the most conventional of responses to reverse the momentum of loss in Afghanistan – more American soldiers. But deploying an unspecified number of American soldiers does not a strategy make. And precisely how President Trump intends to turn the losing tide in Afghanistan remains opaque.