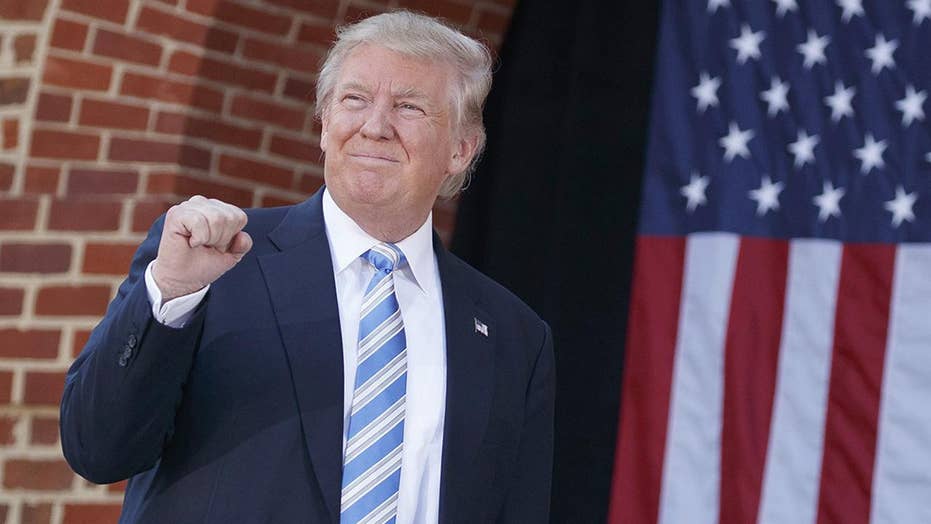 Goodwin: The left needs to face reality -- Trump is winning

The president is reaching a high-water mark in his presidency, with his support growing and expanding.

Happy Fourth of July! After 15 years of lethargic growth, the American economy is finally putting up respectable numbers again.

Well, the data are piling in. Corporate taxes have been cut to internationally competitive levels. Middle class folks are paying less, and deregulation well underway. The result? Businesses are more confident and investing again, consumers are confident and spending again, and the U.S economy is poised for its first 3 percent growth year since 2005.

Over in Europe, where statism and policies more to Mr. Krugman’s liking prevail, the recovery is once again flagging.

Still, skeptics abound among economists whose analysis is more influenced by political biases rather than allegiance to what economic research has taught us about taxes and investment.

Many see another recession looming and they argue the economy is only getting a temporary jolt from tax cuts. After that, they pontificate, aggregate demand will tail off.

Well, nonpartisan econometric studies predating the Trump candidacy indicate the contrary – showing that the 15 percent cut in taxes on business profits enabled by corporate reforms should increase investment between 7.5 percent and 15 percent every year going forward. And in the current environment of deregulation, that higher figure should be the one to more closely apply.

Look for all of this to continue to boost growth in 2019, given that something bad does not happen.

There is a resiliency about Americans when the government gets out of the way. Bank on that.

In the near term, little danger of overheating is apparent. Unemployment is down to 3.8 percent and wages are rising in line with productivity growth and the Fed’s 2 percent inflation target. Add to that a healthy number of job recruits are available (many of whom became discouraged during the Obama years), a stronger dollar keeping competitive imports inexpensive, and robotics and artificial intelligence kicking in.

Consumers generally take a breather during the winter months, because the financial crisis taught them caution. Households have a good time shopping for the holidays and then pay down their bills in the first quarter—hence the tax cut only recently boosted consumer spending.

Fed Chairman Jerome Powell, unlike most professional economists, does not let what personal feelings he has towards politicians cloud his thinking. If the numbers continue to show core inflation in-line with his target, he will recognize the Fed can do little but wreak havoc by boosting interest rates too quickly or too much.

And investors are betting on the U.S. economy over more statist regimes in Europe and China. U.S. stocks and bonds now account for nearly 60 percent of global investment portfolios, even though the U.S. economy—though the largest—accounts for less than one-fifth of global GDP.

The dollar has become even more dominant globally, compelling businesses and governments to borrow greenbacks rather than local currency. Overly aggressive Fed tightening could create crises for many of those debtors—look at Argentina’s recent begging at the door of the International Monetary Fund. That’s another reason to believe Fed Chairman Powell will move cautiously with raising interest rates and slowing the U.S. recovery.

As for a trade war, economists can’t seem to get over the fact that free trade did not work out for a vast swath of interior America.

The Chinese hardly play by free-trade rules. And yes, a poorly conceived American response to China’s aggressive mercantilism could be damaging – but doing nothing could be even worse. Look at the corrosive consequences of trade-driven unemployment, social decay and opioid addiction in America’s rural communities and small cities.

The trick is to penalize China in ways that make retaliation difficult—and that can be done. Unfortunately, there are too few outsiders who Trump’s trade team is willing to seriously consider constructive criticism from, due in large part to the fact they are too busy quarreling among themselves. And Treasury seems to show no alarm about the long-term debt consequences of huge trade deficits.

But, administrations that don’t listen are nothing new. Barack Obama was in constant broadcast mode, and his economists could never be accused of having open minds.

There is a resiliency about Americans when the government gets out of the way. Bank on that. And for now, sound domestic policies—tax cuts, deregulation and prudent Fed policies – will clear a path for the creativity of the American people.

This Fourth of July let’s celebrate.

America is back thanks to President Trump.