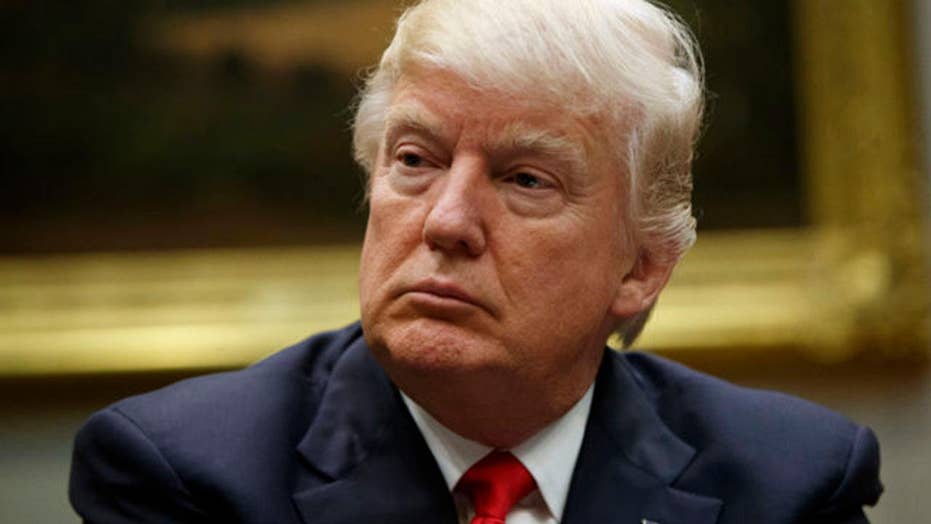 Is President Trump mulling a DACA deal with Democrats?

Democrats would like nothing better than for a Republican civil war to break out between President Trump and his supporters who are concerned about his recent moves to reach out to Democrats on immigration and other issues.

To my fellow travelers on the Trump Train: don’t make the mistake of leaping off or turning on each other. When some of us overreact – as too many Republicans did this week to the president’s efforts to gain support  from the other side of the aisle – we lose credibility and unity, and ultimately threaten the very goals we all seek to achieve.

We need to calm down, act like we won a mandate in 2016 (because we did!) and trust in President Trump. The more we fight among ourselves, the stronger the Democrats get in their efforts to obstruct our goals and return to the failed polices supported by President Obama and Hillary Clinton.

Why should we trust the president we voted for in November? Because of the amazing results President Trump has already delivered in just eight months.

The economy is accelerating, with consumer confidence soaring, incomes finally rising and stocks at all-time highs.

Our southern border, amazingly, is largely secured already, even before the big and beautiful wall is built, as illegal crossings plummet.

On foreign policy, our president is putting America first and backing greater investments in our defense that will increase our national security and protect us all.

And, perhaps most importantly, solidly conservative Justice Neil Gorsuch sits on the Supreme Court and will hopefully remain there for many years. President Trump could totally reshape the high court over the next seven years, with an impact that could last for decades.

But instead of gratitude for these accomplishments and confidence in the successes still to come, too many on the Trump Train express bewildered dismay at even the slightest disappointment with the president’s tactics.

President Trump dined this week with congressional Democratic leaders Nancy Pelosi and Chuck Schumer – a wise move by the master of the art of the deal. The Democrats claimed they reached a tentative deal with the president on the broad outlines of legislation to protect young immigrants brought to our country as children in violation of the law, but the president clarified that no final agreement had been reached.

And while the Democrats said they won’t support a border wall, the president told reporters that “the wall will come later” and added: “Well, we want to get massive border security, and I think both Nancy Pelosi and Chuck Schumer – I think they agree with it.”

President Trump understands that with no assurance of unanimous support from Republicans in the House and Senate, talking to Democrats makes sense if it can help him win approval for actions that will benefit the American people.

Unfortunately, the online assault from Trump’s own supporters after he met with Pelosi and Schumer was immediate and fierce. Breitbart called him “Amnesty Don.” InfoWars posted the headline: “Top Republicans Call for Trump Impeachment.”

But I’m aware of precisely one Republican calling for Trump’s removal. Ann Coulter tweeted “At this point, who DOESN’T want Trump impeached.”

President Trump’s Republican critics need to stop hyperventilating. The president has agreed to exactly zero on immigration so far. He is negotiating, which is the very skill that made him a mogul and will make him an historic president. It’s impossible to reach agreement with anyone on anything if you don’t talk with them.

Many of the screeching loudmouths on the right live for perpetual outrage and embrace bizarre conspiracy theories. Controversy remains, quite literally, the very business of blusterers like Alex Jones and Ann Coulter.

I do, however, understand the angst of the typical Trump voter. Decades of watching Washington expropriate our prosperity and abuse our rights have created a natural suspicion, particularly when charlatans like Pelosi and Schumer participate in the deal.

I also am admittedly puzzled at the president’s present tactics. While I, like President Trump, want the protections of DACA (Deferred Action for Childhood Arrivals) extended to prevent the deportation of immigrants brought here illegally as children, it’s also imperative that a deal with Democrats involve reciprocity.

As I wrote in an earlier op-ed for Fox News, the president’s support for DACA should be used to leverage support in Congress for building the border wall and for support of the RAISE Act, which would bring needed reforms to our immigration system so we would admit immigrants with high levels of education and skills who also love our values.

But I am not jumping off the Trump Train. Doing so would make it much harder to achieve these and other critically important goals – including creating jobs, strengthening our economy, giving us greater national security, reforming our tax code and improving health care.

Much more unites Republicans and others who made Donald Trump our president than divides us. Let’s not derail the Trump Train and destroy our chances to Make America Great Again under our president’s able leadership.