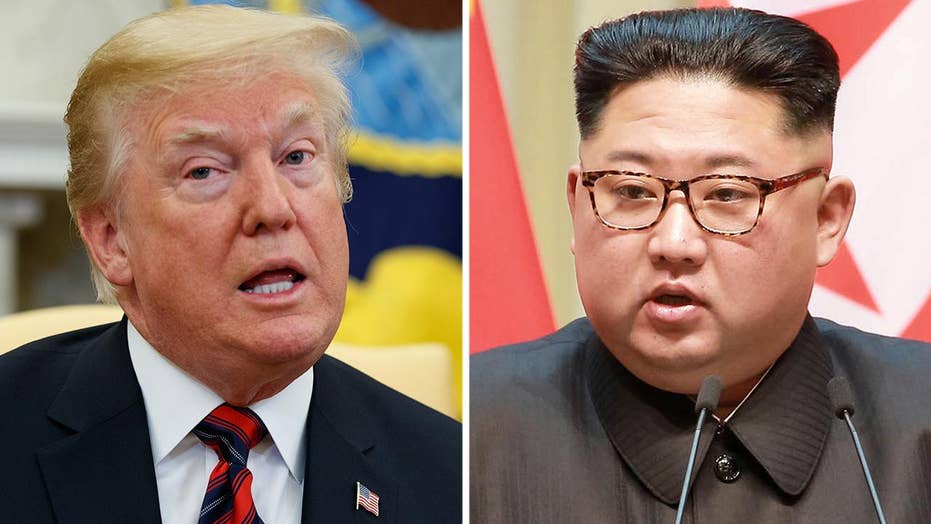 President Trump did the right thing Thursday when he canceled his planned June 12 summit in Singapore with North Korean dictator Kim Jong Un and pledged to continue a “maximum pressure campaign” against the nuclear-armed communist dictatorship.

Kim really gave President Trump no choice, after North Korean propaganda outlets once again made veiled references to a potential nuclear clash with the U.S. After that, President Trump would have looked weak and foolish to meet with the dictator – with a summit essentially legitimizing Kim.

As President Trump wrote diplomatically in his letter to Kim canceling the meeting: “Sadly, based on the tremendous anger and open hostility displayed in your most recent statement, I feel it is inappropriate, at this time, to have this long-planned meeting.”

And President Trump also used his letter to remind Kim of an obvious truth: “You talk about your nuclear capabilities, but ours are so massive and powerful that I pray to God they will never have to be used.”

If President Trump had flown to Singapore looking like he was begging Kim for an audience and then walked away without a concrete denuclearization pledge from the dictator, the United States would have been humiliated. Tensions between the U.S. and North Korea would have surely intensified – raising the chances of a military confrontation.

Going back to January, when Kim gave his annual New Year’s Day address and declared his nation was ready to join the Olympics in South Korea, many of us thought he might be turning over a new leaf.

As the months went by, we did what all humans do – we let our hopes override common sense. We allowed our dreams, aspirations and optimism to take root. The reality of who we were trying to bargain with failed to set in.

We forgot two basic truths: North Korea will always be North Korea, and Kim Jong Un is a brutal, lying dictator who can’t be trusted.

Until Kim has his “come to Jesus moment” – which most likely will never happen – we are faced with a dictator whose family allowed the death of countless North Koreans to build nuclear weapons and long-range missiles.

In our optimism over the Trump-Kim summit, we forgot all the things that make us fear North Korea, what makes the nation a dangerous adversary, and why negotiating with the North will never be easy or ideal.

We forgot that Kim has over 100,000 people in political prison camps that can only be described as gulags, where prisoners are tortured, starved and killed for no reason.

We forgot that Kim has over 11,000 artillery and missile platforms pointed at the South Korean capital of Seoul, ready to strike at a moment’s notice. And with 25 million people in the Seoul metro area, just one missile armed with a conventional explosive slamming into a skyscraper would set off a chain reaction akin to 9/11 in New York – and likely far worse once more shells slammed down.

We forgot that Kim has over 5,000 tons of chemical weapons and most likely biological weapons – and could kill hundreds of thousands of people with these alone.

We forgot that we have been down this path before when it comes to Pyongyang and its openings, promises and attempts to pull at our hearts.

Sadly, I and many others let our hopes blind us to the reality that was right front of us.

Now we need to face reality in the wake of the summit’s cancelation: the chances of Kim giving up nuclear weapons – the only thing that guarantees his survival – are likely close to zero.

I had warned days ago that the planned summit was dead – and I was called crazy. I wish I had been wrong.

Considering how far apart Pyongyang and Washington are when it comes to denuclearization – with Kim apparently wanting to make an aspirational pledge, whereas the Trump administration is looking for concrete steps and a timeline – there was always a good chance the summit would never take place.

However, all hope is not lost. If Kim is willing to declare a clear plan of action that has a timeline for the removal of his nuclear weapons that is verifiable, then a summit is still possible. But frankly, that’s extremely unlikely.

If Kim wants a basket of incentives first before giving up anything – like a peace treaty, diplomatic recognition and the removal of sanctions – then we will never have a summit. In fact, we could very well go back to the same cycle of missile tests that brought us to the brink of armed conflict year.

But no matter what happens next, let’s just remember who we are dealing with in North Korea. Optimism be damned.