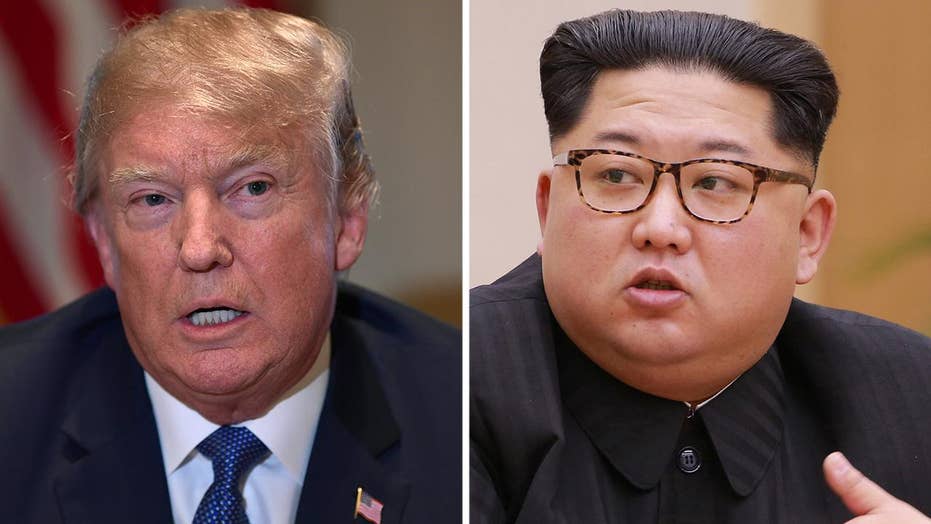 I applaud President Trump’s efforts to apply maximum pressure on North Korea at the same time he is seeking a diplomatic resolution to the crisis caused by the rogue regime’s development of nuclear weapons and long-range missiles. But I have a warning for him: Mr. President, be careful – be very careful – and don’t trust the North Koreans. They have a long record of lying again and again to your predecessors.

But we have every reason to be skeptical.

History cries out for the U.S. and our allies to be cautious in dealing with the North. Only the verified actions of the North Koreans should unlock a change in our policies towards them. No amount of their words or vague promises should ever be rewarded.

Preparations under way for possible meeting between President Trump and Kim Jong Un; Greg Palkot has the latest from London.

When it comes to dealing with North Korea, we are very much in the land of the unknown.

We went through a tumultuous 2017, filled with missile test after missile test flying through the skies of Asia –some directly over Japan – along with a hydrogen bomb test and North Korean threats of war. We should thank our lucky stars that our worst fears never came to pass.

And in fact, a new year seems to have opened new possibilities. For whatever reason – whether economic isolation, the realization that his nation was on an unsustainable path, or demands by his Chinese masters – Kim has been doing all he can to rehabilitate his image and his nation’s.

After Kim delivered a New Year’s Day speech in which he embraced South Korea’s Olympic Games that led to North Korean participation in the games, the stage was set for a rapprochement between the North and South.

Following multiple rounds of diplomacy between both sides, the world will watch televised coverage of a summit between Kim and South Korean President Moon Jae-in on April 27.

The North-South summit could formally end the Korean War by beginning negotiations on a peace treaty to replace an armistice that halted fighting in 1953. That might shape a dramatic change in relations for both nations. Add in the ever-growing possibility of a U.S.-North Korea summit and even a Japan-North Korea summit.

All this makes the world ever more hopeful that the long crisis on the Korean Peninsula could very well be coming to an end.

But before we get too optimistic about a peaceful resolution of the Korean crisis and start expecting the North to abandon its nuclear weapons, let’s be realistic. Kim has worked hard to build up his nuclear arsenal and has every reason – short of imminent regime collapse – to hold onto his nukes.

Kim sees nuclear weapons as his life insurance policy for his regime and for himself – a deterrent that protects his country from a military confrontation with the U.S., South Korea, or Japan – or all three combined. Such a confrontation could depose his regime and end with the death of many North Koreans – including Kim.

Only the most senior U.S. officials have any idea what Kim might be thinking or what he has conveyed to U.S. diplomats. But the danger is clear: North Korea could be doing all it can to offer very broad guarantees to suck in the U.S. and its allies into multiple summits – and years of protracted negotiations – without giving up anything at all.

Meetings with President Trump and with South Korean leaders will enable Kim to look like a global statesman and boost his status. His image and profile will be slowly rehabilitated – showing North Koreans he can stand toe-to-toe with the world’s most powerful nation and be respected as an equal.

This would give the North Korean dictator a huge boost domestically, showing that he deserves the respect and loyalty of his people, as he has stared down and brought to heel the American imperial menace.

How will we know that this is Kim’s ploy?

First, look for North and South Korea to make no mention of the removal of nuclear weapons in their talks next week. North Korea has insisted in the past that such an issue can only be resolved between Washington and Pyongyang. Seoul, eager to create the atmosphere for better relations and a diplomatic breakthrough, will likely punt this topic to President Trump’s summit with Kim.

Next, look for the North Koreans to offer President Trump a deal to denuclearize over a long period of time, with multiple rounds of negotiations – but only after they get the benefit of a sit-down meeting with the leader of the free world.

And from here, things get even dicer.

If the Trump administration’s goal is to see a fully denuclearized North Korea – and if Kim is willing to talk before a summit – we must have Pyongyang define what the term “denuclearize” means. The meaning may seem obvious – getting rid of every single nuclear weapon and never building another – but it’s easy to see North Korea arguing over what the term means.

Once we define denuclearization, what exact time frame would the North Koreans agree to accomplish this? What would they want in return? We should not give the North any benefits until the process is complete.

And – of absolutely critical importance – how would any action North Korea takes to get rid of its nuclear weapons be verified beyond doubt? A claim by the North that it has taken action without proof is worthless.

If North Korea will not provide answers to these questions, President Trump’s goal can’t be accomplished. And that means we should not give Kim the photo-op with President Trump that he so badly desires.

And unless and until America gets the verifiable agreement that satisfies the Trump administration, our policy of maximum pressure on North Korea should be maintained and strengthened.

But history screams out. It tells us to reread its warn pages when it comes to North Korea and realize that – more likely than not – Kim is laying the groundwork to dupe us again with false promises he has no intention of keeping.

Be cautious, President Trump. Chances are this is all a giant ruse.