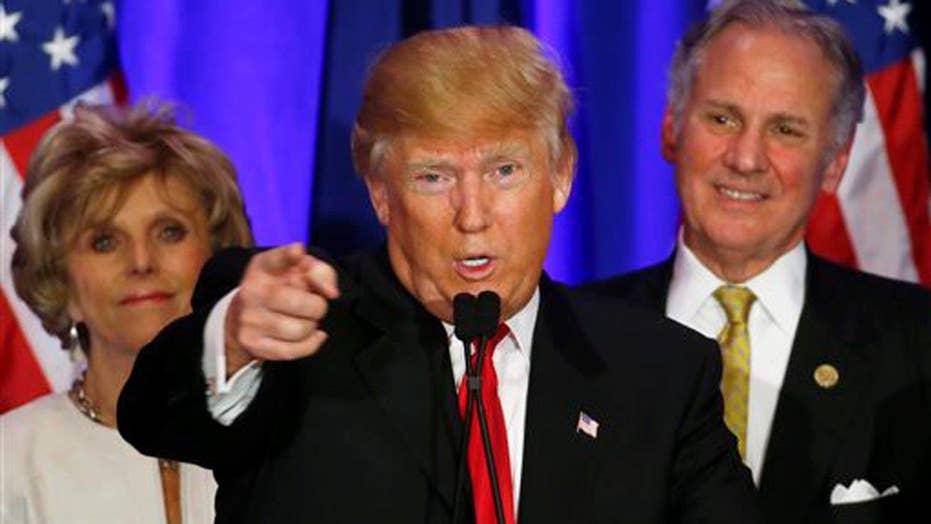 The Republican primary in South Carolina ended with one victory and three victory speeches.

Marco Rubio, high on his rebound from New Hampshire, his second-place finish over Ted Cruz and the withdrawal from the race of Jeb Bush, was boyishly ebullient.   “The children of the Reagan revolution are ready to assume the mantle of leadership,” he announced to a cheering crowd of supporters.

“My friends, we have once again made history!” Cruz thundered to his supporters on election night. This elicited a puzzled silence (he came in third, after all) until Cruz explained that he had once again exceeded the expectations of the detested pundits.   That got a cheer.

Cruz then invoked a moment of silence for Supreme Court Justice Antonin Scalia, not failing to mention that he and Scalia went back twenty years. The candidate was a lowly clerk at the Supreme Court back then, and Scalia was his role model. “As Ronald Reagan was to the presidency so, too, was Justice Scalia to the Supreme Court,” Cruz said.

Both Cruz and Rubio praised Jeb Bush in effusive terms in their victory speeches.  Their praise was, of course, directed at Jeb’s donors and voters. Trump, in his speech, didn’t even mention Bush’s name.  Having eviscerated the Bush family heir, he felt no need to shed alligator tears for the former governor of Florida or to court his supporters.

Trump did patronizingly name-checked “Marco and Ted” for doing a good job (by finishing ten points behind him) but he made it clear that he doesn’t fear them. He derided the pundit wisdom that, as more candidates drop out, one of them would inherit enough support to lead an anti-Donald coalition.

“I’m going to get a lot of those votes,” Trump said, which seems like a reasonable assumption.   He is way ahead of the pack in next week’s Nevada caucus and will go rolling into the March 1st Super Tuesday primaries on a bandwagon. With rare understatement, Trump told the South Carolina crowd that he expects to do “very well” in those thirteen contests. Then, then, under his breath, he added am additional “very well.”

The contrast between Trump and his two closest rivals was on full display on Saturday night.  Cruz and Rubio both portrayed themselves as the young heirs to awesome heroes. This called attention to their youth and their lack of accomplishments beyond getting elected to the Senate.  Invoking Reagan and Scalia made them seem boyish.

Donald Trump, like him or hate him, is a full grown man. He has kids the age of Rubio and Cruz and a lifetime of achievement in big arenas.   If Trump is in awe of anyone, it is himself.

It is not easy to see who beat Trump after South Carolina.  Not even the Big Guns--President George W.  Bush and Pope Francis—left him unscathed.

Trump will very likely arrive at this summer’s nominating convention in Cleveland with a plurality of delegates. If Cruz and Rubio go the distance it is conceivable that they will have enough delegates between them to block Trump. It is less conceivable that they can cut a deal.  They are rivals for the leadership of their conservative generation and neither will want to cede primary to the other.

Trump, who is turning seventy this summer, is not a long term political threat and this gives him leverage.

Rubio considers himself a son of Ronald Reagan?  Fine, but Reagan is dead and Donald Trump is alive and well. A term or two as his vice president—with an important role in making foreign policy—could make Rubio first in his class when the time comes.

Ted Cruz, too, might be tempted by such an offer. But Cruz’s hero is Scalia, not Reagan.  And it just so happens that the Scalia seat on the Supreme Court is vacant. Cruz would find mighty hard to resist the temptation to sit in daddy’s chair, especially if he can pay for it in delegates who aren’t going to get him the party’s nomination and will keep Rubio out of the White House.

All this is speculation of course.  Nobody knows what is going to happen in this kind of election year. Trump, as he has predicted, may run the table. Or maybe he will stumble. But both Cruz and Rubio have to be thinking about contingency plans after their “victories” in South Carolina. Trump will be thinking, too.  He never stops.