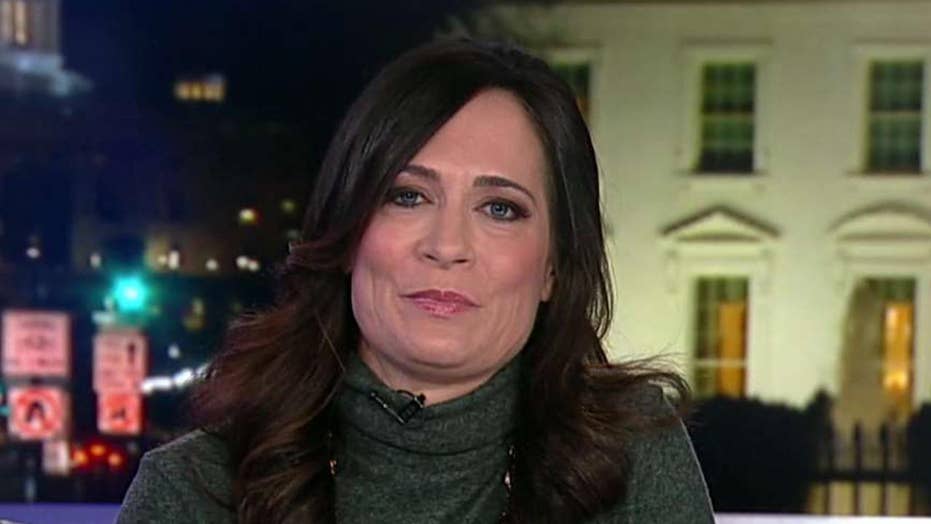 Grisham on public impeachment testimony: It was a joke

The American political world came to a halt Wednesday with the debut of a new TV production: Democrats vs. Trump: Impeachment Inquiry 2019.

With so many questions unanswered, one above all will matter: Will Democrats be able to convince a divided country that President Trump is unworthy of his office and must be impeached?

Of course, that question couldn’t be answered in full just from Day One of the hearings before the House Intelligence Committee. Nevertheless, the pressure was on the Democrats to at least begin producing some of the “goods” on Trump or risk losing the interest of the American people and their support for an impeachment inquiry – let alone their potential support for an impeachment vote.

With that in mind, what was the significance of Day One of the proceedings?  Here are the Top 5 takeaways.

There is no bipartisanship among the inquirers

In 1973, Republican Sen. Howard Baker of Tennessee was the ranking member of the Senate Watergate Committee. Two years before, President Richard Nixon asked Baker if he wanted to be on the Supreme Court. Despite his alliance with Nixon, during the Watergate hearings, Baker famously asked: “What did the president know and when did he know it?” Despite the enormity of the moment, or because of it, Baker led the way in a bipartisan investigation.

Decades later, it is apparent that none of that bipartisanship exists on the House Intelligence Committee, chaired by Rep. Adam Schiff, D-Calif. Schiff is certainly no Howard Baker. As of this moment, the two parties are across the proverbial aisle from each other. At the hearing Wednesday, the Democrats pressed their selected opinions and facts and the Republicans pressed theirs. It was “us against them” – with no meeting of the minds. That is likely to continue because . . .

The Watergate hearings, which took place before 24-hour cable news and social media, seemed breathless at the time as revelations unfolded. The impeachment proceedings against President Bill Clinton occurred while the Internet was still young, involved many aspects, was salacious at times and involved many characters.

By contrast, Day One of the Trump impeachment hearing produced no blockbuster moments – new details yes, but no grand surprise. Why? Two reasons. First, it appears that most of the significant facts are already out in the open through leaks and the release of deposition transcripts. This day might have mattered more if the Democrats had held back their release of information.

Overall, the Republicans were not surprised by Wednesday’s proceedings and Democrats had the day scripted – if not overly scripted. If that holds true for the balance of the proceedings, the Republicans will justifiably maintain their view that nothing impeachable occurred, and the Democrats could be seen as still not delivering the goods.

Beyond that, the public likely will get bored hearing opinion after opinion about the same set of facts. That is a bad omen for the Democrats.

The Democrats case has been reduced to arguing about intent

The Democrats came charging into the day talking about bribery and extortion. However, Day One established that Ukraine got the aid it wanted from President Trump – a lot more than the Democrats and President Obama delivered to the nation.

Ukraine got the aid without having to do anything – no added investigation, no added statement, no nothing. That leaves the Democrats arguing that Trump “intended” to be bad toward Ukraine.

That is a tough sell because, as Day One proved, when President Obama was asked for military aid by Ukraine, he sent blankets because he did not want to antagonize Russia. It also produced this headline in Europe: “Poroshenko asks Obama for weapons, obtains blankets.”

Keep in mind that Obama refused that military aid after attempting to secretly tell Russian President Dmitry Medvedev that he would have “more flexibility” after the next election. Is that not evidence of Obama asking for Russia to not jeopardize his reelection by its actions and words?

Given that, as Day One closed, Americans might rightfully ask: Who was better for Ukraine?

If you didn’t know before that Ukraine had a history of political corruption, it was not possible to watch Day One and not know it now.

That history lesson hurts the Democrats because, as Fox News reported: “State Department official George Kent testified Wednesday that he would ‘love’ to see Ukraine look into the circumstances surrounding the closure of a probe tied to natural gas firm Burisma Holdings, while also raising concerns that Hunter Biden’s role on the board of that firm created the appearance of a conflict of interest.”

Given the Democrats stated refusal to allow an inquiry in these proceedings into the actions of the former Vice President Joe Biden and his son Hunter, Kent’s statement bolsters the Republican cause for looking into the Bidens and muddies the waters for the Democrats.

Democrats would like to portray themselves as the folks wearing the white hats in these proceedings. If Republicans successfully counter with the actions of the Bidens and the request for dirt on former Trump campaign head Paul Manafort by the Obama administration and the Democratic National Committee, the air could quickly come out of their impeachment balloon.

Impeachment is a political process, not a legal process. The Democrats are trying to win a political battle. Were any Republicans' minds changed? Likely not many across the country. How about Democrats? Also, likely nor many in our divided times.

Were the minds of many independents changed? Only time will tell, but this much is true: On balance, this was not a big day for Democrats. Yes, they told the story they wanted to tell. But any reasonable person will see that this is a one-sided affair and that President Trump delivered the military goods to Ukraine to fight Russia.

Day One – when the Democrats had the nation’s attention – did not deliver the political goods the Democrats need to persuade Americans to favor Trump’s impeachment.