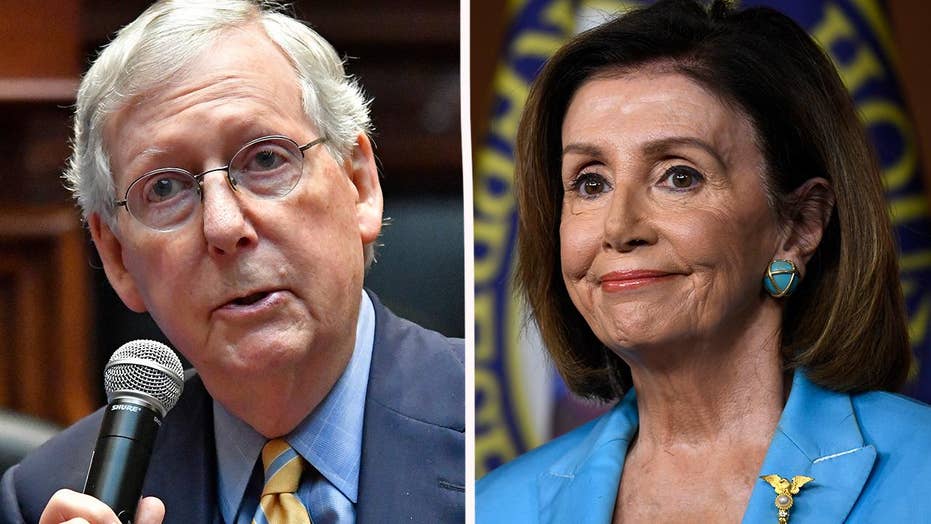 What power does he have? Analysis from former DOJ official Robert Driscoll.

The Democrats are bound and determined to impeach President Trump. Initially buoyed by polls, the Democrats have seized the initiative and some claim they already have the necessary votes. An impeachment trial would be the Trial of the Century and here is how Republicans can – and must – win it.

As a lawyer who has prosecuted trials over several decades, I can tell you that he who frames the argument has the greater chance for victory. In addition to that, a victorious trial strategy requires a clear and easy to understand narrative for the jury. For the defense, that often means convincing jurors that there is reasonable doubt as to whether the person on trial committed any wrongdoing.

Finally, it is important to note that complexity is often the enemy of victory. When you are explaining too much, you are losing. That is a simple fact of politics and trials.

DAVID BOSSIE: HILLARY CLINTON, HERE'S WHAT YOU NEED TO DO NOW (HINT: TULSI GABBARD HAS A SOLUTION)

Of course, this impeachment trial, especially in the internet/mass media age, will not just be a legal matter. On the contrary, it will be a trial by national public opinion like none other in U.S. history. As such, it will require an effort like none before as well.

The Republicans need to understand how serious the D.C. Democrats are about winning the White House. As I wrote earlier on this page, the Democrats actions are not about Trump per se, it is about power and their desire to transform America. They want the White House no matter what. Trump is in their way as will be the next Republican president.

As for the impeachment trial, no one can say for sure if or when it will begin. Republicans, however, cannot wait to know the answer. They MUST act now.

Step One. Republicans must frame this fight in broad terms. This is not just about a phone call or aid to the Ukraine. This is about whether entrenched bureaucrats can reject our vote. This is about politicians not accepting the results of an election and disenfranchising half the country. There is plenty of historical video of Nancy Pelosi, Jerry Nadler and others making the same argument when Bill Clinton was impeached. Trump’s team pointed out several of their comments in the eight-page letter rejecting the so-called impeachment inquiry.

Step Two. Republicans must take to the airways to let Americans know that the work of the country is not being done. For instance, American jobs are being held back because the Democrats are more interested in partisanship than passing the U.S./Canada/Mexico trade deal. Fortunately, the Trump campaign has started pointing this out.

Step Three. Republicans must be seen and get visual. This case will not be won by Republicans arguing in the Beltway with the Washington Post and ABC. It can only be won by taking to fight across the country and not just on friendly talk radio. They must go beyond their followers – especially to Independents.

Republicans must understand that the Democrats' case against Trump looks interesting, if not bad, until one realizes that the Obama Administration and other Democrats did much worse. They repeatedly asked Ukraine to interfere in the 2016 election against Trump, tried to kill the Ukrainian investigation related to Joe Biden and refused to take evidence from the Ukraine of Democrat wrongdoing.

It is time for Republicans to go up on local cable TV and the internet to educate Americans about the stunning hypocrisy of the Democrats' case. Do it with user-friendly graphics, not long exhortations.

Some people know the above – but not America at large. CNN, MSNBC, et al. will not tell them just as they didn’t tell them that Hillary’s campaign funded the Steele Dossier.

It is time for Republicans to go up on local cable TV and the internet to educate Americans about the stunning hypocrisy of the Democrats' case. They need to do that with user-friendly graphics – not long exhortations. Republicans need to do this now – not at the last minute.

Step Four. It’s time to declassify. The actions of those in government prior and just after the 2016 election are well beyond unacceptable. The nature of their attempts to unseat Trump must be exposed. Along with their continued whistleblower efforts, the threat to the rule of law is more than palpable. They must be outed for what they did – they are no ordinary cabal. What they did and are doing is unprecedented and must be stopped. By outing some now, it will deter others.

Step Five. Subpoena them. If and when the Democrats vote for impeachment, Republicans in the House will gain the right to subpoena witnesses and documents. Right now, because there has been no formal vote, only Democrats have the power of the subpoena. Republicans can start by subpoenaing Biden – a spectacle that will end his presidential hopes once and for all. Of course, Republicans in the Senate need to step up now. They can start the process ahead of the House vote.

If Republicans do well with the steps above over the next 60 days, there may never be an actual impeachment. If they do not, they should conduct the trial as follows.

Impeachment trials, for their lofty and incredible importance, are not courtroom battles in the normal sense. First, it is more of a political fight than a legal one. Second, there is no great set of federal rules of civil or criminal procedures that apply to the trial. On the contrary, the rules are subject to the vote of the Senate.

As for the political fight, Republicans need a central narrative for the trial. They must bring home the fact that Trump is being impeached for doing 1/20thof what the Democrats have done.  They can do that by calling witnesses and experts to establish the actions undertaken by the Democrats during the Obama Administration. The GOP must call out the hypocrisy of these actions being acceptable to Democrats then but unacceptable to them now. The practices of the past will exonerate Trump IF America is sufficiently aware of the past.

As part of that effort, there must be side-by-side graphics. People are visual and visual aids are indispensable at a trial. One column has the many Obama era abuses as well as Bill Clinton asking Tony Blair for help and the other, much shorter column, will be Trump’s request for help under the U.S. Ukraine Mutual Cooperation treaty.

As for trial procedure, the majority party in the Senate, i.e. Mitch McConnell and the Republicans, will decide most of the rules. But this go-round must be different than the last time a Republican Senate decided the rules for an impeachment trial.

Incredibly, during the Clinton trial, the adopted Senate rules did not allow for any live witnesses. That proved entirely unpersuasive. Perhaps that is what they wanted. This time, however, the stakes are far too high. Given that, by far, the Democrats committed the egregious acts, Republicans must allow for live witnesses to get their points across.

This trial of the century on its surface is about the actions of people. In reality, it is about whether this country will be ruled by a government elite or by its people. The exact timing of this fight may have been unexpected but its importance cannot be.

Either Republicans rise to the occasion and draw the line or the country will be forever transformed from a relatively free society with a limited government to a country ruled by a central government.