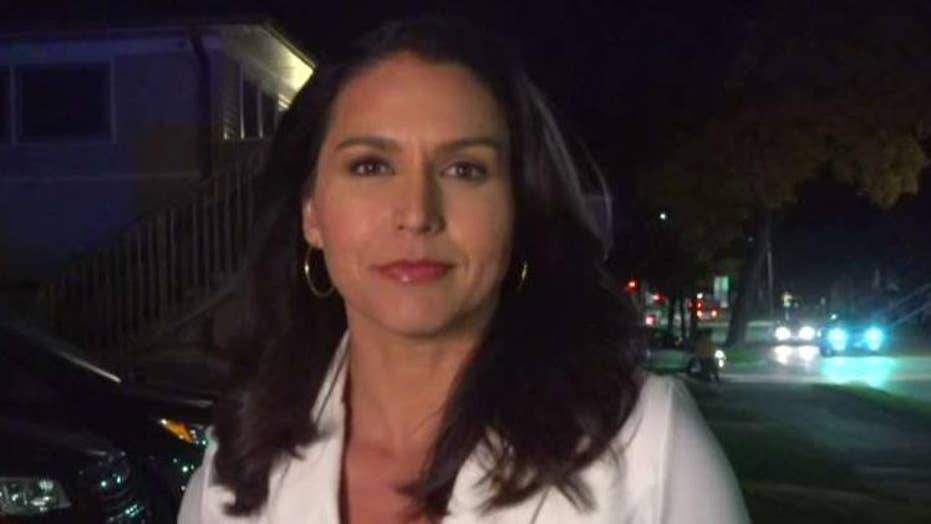 Has Hillary Clinton finally lost it?

In what sounded like a sketch from “Saturday Night Live” or an episode of the old “Twilight Zone” TV series, Clinton used a podcast interview this week to throw out a bizarre conspiracy theory attacking struggling Democratic presidential contender Rep. Tulsi Gabbard of Hawaii.

Shocked by her stunning defeat at the hands of Donald Trump in the 2016 presidential race, Clinton and her supporters – including most of the media – concocted a Russia collusion hoax to explain Trump’s victory.

KARL ROVE TO HILLARY CLINTON: 'PUT UP OR SHUT UP' ON TULSI GABBARD ACCUSATIONS

Now – pulling from the same discredited playbook – Clinton is imagining that those crafty Ruskies are working to help Trump get reelected by getting Gabbard to run as a third-party presidential candidate and pull votes from whoever the Democrats nominate to run against Trump next year.

“I'm not making any predictions but I think they've [the Russians] got their eye on somebody who is currently in the Democratic primary and are grooming her to be the third-party candidate,” Clinton said, in a clear reference to Gabbard. “She's the favorite of the Russians. They have a bunch of sites and bots and other ways of supporting her so far.”

And then, for good measure, Clinton said that 2016 third-party presidential candidate Jill Stein was also “a Russian asset.” Clinton supporters have blamed Stein for keeping Clinton out of the Oval Office by taking votes away from her.

TULSI GABBARD BLASTS HILLARY CLINTON AFTER RUSSIAN ASSET COMMENTS: 'I STAND AGAINST EVERYTHING SHE REPRESENTS'

Never mind that Special Counsel Robert Mueller discredited the crazy Russia hoax and cleared Trump and his campaign of collusion with Russia after spending two years and millions of taxpayer dollars on a needless witch hunt. Clinton still can’t bring herself to believe that Trump won because he was the better candidate – she thinks it must have been the Russians who put him in the White House.

And now, according to Clinton’s new conspiracy theory, the Russians are working to keep Trump in the White House by turning Gabbard into the Jill Stein of 2020.

Gabbard tweeted in response: "Thank you, Hillary Clinton. You, the queen of warmongers, embodiment of corruption, and personification of the rot that has sickened the Democratic Party for so long, have finally come out from behind the curtain. ... It’s now clear that this primary is between you and me. Don’t cowardly hide behind your proxies. Join the race directly."

At her second presidential debate against Trump in 2016, Clinton said that “at some point we need to get the facts out.”  OK, so now is a good time for the former secretary of state, senator and first lady to come forward with whatever facts she has about Gabbard and Stein working with the Russians (Stein also denies the accusation).

Why Clinton would choose to attack Gabbard of all the presidential candidates doesn’t make any sense. After all, Gabbard is polling at just 1.2 percent according to the latest public survey averages – and is now getting an enormous amount of free publicity because of the Clinton attack.

But that’s beside the point; Clinton has made a very serious charge that deserves scrutiny by the free press.

The mainstream media should demand Clinton answer questions, starting with what information she has to support her accusation about Gabbard, a combat war veteran and a major in the Army National Guard.

Let’s remember that Clinton still owes the American people answers about her own presidential campaign’s payments to a law firm that funneled money to ex-British spy Christopher Steele to collude with Russians to fabricate dirt on presidential candidate Trump.

I think everyone would like to know what Clinton knows about Steele’s activities in working with senior Obama administration officials to smear and frame candidate Trump.

The former secretary of state might also shed some light on Ukraine’s anti-Trump activities in 2016, since her ally – Rep. Adam Schiff, D-Calif. – has made that nation the focus of his witch hunt du jour in the impeachment crusade now underway by desperate Democrats against President Trump.

Hillary Clinton’s words are supposed to carry weight. She has made a charge that the Russians are meddling in the 2020 presidential election. If her statement wasn’t so batty, it should probably trigger an investigation – maybe another special counsel.

Perhaps some of Clinton’s former donors and supporters on Robert Mueller’s team are available to look into the new nutty allegations. I’m sure political operatives in her stable are willing to dig into it as well and spend hours on MSNBC and CNN discussing made-up Russian attacks on Gabbard and whoever the Democrats nominate to run against Trump.

These must be sad days for Hillary Clinton. She’s been reduced to lobbing unhinged conspiracy theory grenades into a primary election contest that she won't enter because she can’t win.

Clinton obviously still can’t get over losing the 2016 race to Donald Trump; the race that was supposed to be a can't-miss victory. She was supposed to crack the hardest and highest glass ceiling and become the first woman president in American history. This was her destiny and claim to eternal fame and glory – until Trump came along.

Clinton’s inability to rise to the occasion in her race against Trump – as President George H.W. Bush was able to do when he lost to her husband Bill Clinton in 1992 – is taking its toll on our grand republic. Hillary continues to selfishly divide our nation. It’s time for the mainstream media and any responsible power brokers on the left to tell her to knock it off once and for all.

The day after her humiliating and clearly traumatic election defeat to Trump, Hillary Clinton tweeted:  “to all the little girls watching…never doubt that you are valuable and powerful & deserving of every chance & opportunity in the world.”

Apparently these words don’t apply to Tulsi Gabbard. Clinton’s longtime insistence that she’s essentially the world’s greatest advocate for women makes her attack on Gabbard that much more outlandish.

Since the day Trump was elected president, Clinton and her Resistance supporters have worked tirelessly to discredit and delegitimize the duly elected president and ultimate political outsider. It hasn’t worked, because this president is as tough as nails and is laser-focused on his job –

If Hillary Clinton wants to be relevant and remain in the public debate, she shouldn’t’ lurk in the shadows and throw bombs at her political enemies. It’s time for Hillary Clinton to come forward and face the music.

Gabbard was right to challenge Clinton to “join the race directly.”

Madam Secretary, are you in or out? I’m sure the twice-failed presidential candidate is contemplating this question as we speak. She might not like the reality. The reality is that most Americans want her to take a very long and very restful walk in the woods and just go away. Far, far away.