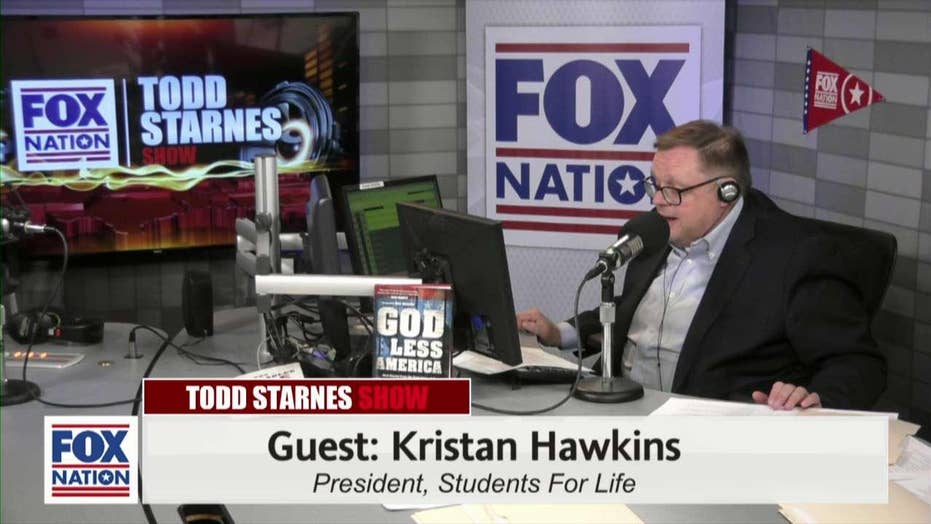 Todd Starnes and Students for Life President Kristan Hawkins about the controversy over abortion laws in NY and VA.

Dietrich Bonhoeffer, the famed German theologian, once warned us that silence in the face of evil is evil itself. In recent days evil has shown its face in New York and Virginia.

Last week Gov. Andrew Cuomo signed legislation that would allow women to abort their babies even up to birth.

YOU CAN WATCH "STARNES COUNTRY" EXCLUSIVELY ON FOX NATION. SIGN UP FOR YOUR FREE TRIAL NOW.

If you’ve ever wondered what a modern-day barbarian looks like, look no further than the New York governor’s mansion.

How could Democrats, especially those who profess to be Christians, support politicians who want to kill babies when the mother is in labor?

Pro-life Americans have been staggered by the monstrous actions of many anti-life Democrats in recent days. There are truly no words to describe the inhuman cruelty of the left.

Tim Mercaldo, the senior pastor of Gateway Church in Staten Island, posted a passionate letter on Facebook urging the governor to reconsider his actions.

“I have been a proud New Yorker all my life. This decision has left me not only grieved but ashamed. Please affirm and protect all human life, whether in the womb or near the tomb,” he wrote.

Thank goodness there are pastors in New York who are not ashamed of standing up for the unborn and who are bold enough to speak truth to power.

However, the pastor’s message was promptly taken down because it allegedly violated Facebook’s community standards.

The pastor has tried numerous times over the past few days to repost the message – but the Facebook overlords continue to block his efforts by labeling his letter as spam.

Since Facebook will not allow Pastor Mercaldo to post his letter to the governor, I have decided to publish it in my column.

I am deeply grieved and shocked by your decision to support and initiate the lifting of restrictions on abortions in the third trimester of pregnancy. My perplexity is rooted in your disregard for the human being in the mother’s womb. This is, by all accepted biological scientific evidence and ethical understanding, a “human body” and “human being” deserving protection. This “child within” is the most vulnerable member of our society.

Yes, every person has a right to do whatever they see fit with their individual body, but not when it ill affects another person’s body. (especially their viability). The termination of a fetus’ life is not, nor can ever, be the “right” of a mother, or any person(s) for that matter. This is not a political nor religious matter relegated to “left/liberal” or “right/conservative” debate. It is a human right, which is why I chose such as the subject banner.

Please reconsider, Mr. Cuomo. I have been a proud New Yorker all my life. This decision has left me not only grieved but ashamed. Please affirm and protect all human life, whether in the womb or near the tomb.

Thank you for reading my appeal. I am only one voice in an increasing wilderness of disregard for the pre-born baby. I know I represent millions in NY who think and feel the same way. Yet, whether some, all or none ascribe to what I have written, it is the truth objectively and I will continue to be a voice for those who cannot speak and defend themselves.

I would be happy to meet with you to discuss this further in the hope that you would be open to the above. I would meet with the same openness to hear your reasoning. Much is at stake for the individuals involved, and that is perhaps the understatement of our time.

Pastor Mercaldo tells me he was perplexed by the message he received from Facebook.

“It specifically indicated, ‘Your comment goes against Community Standards,’” he said. “There is nothing in the way my letter was written that a reasonable person would consider ‘hate speech’ or even ‘offensive.”

The pastor acknowledged that Facebook is a private company that can govern its contention. However, he said, “It is constantly promoted as a public forum for almost anything one can imagine.

That’s true, but a community that turns a blind eye to the slaughter of unborn and newly born babies is not a community worth belonging to.

YOU CAN WATCH "STARNES COUNTRY" EXCLUSIVELY ON FOX NATION. SIGN UP FOR YOUR FREE TRIAL NOW!