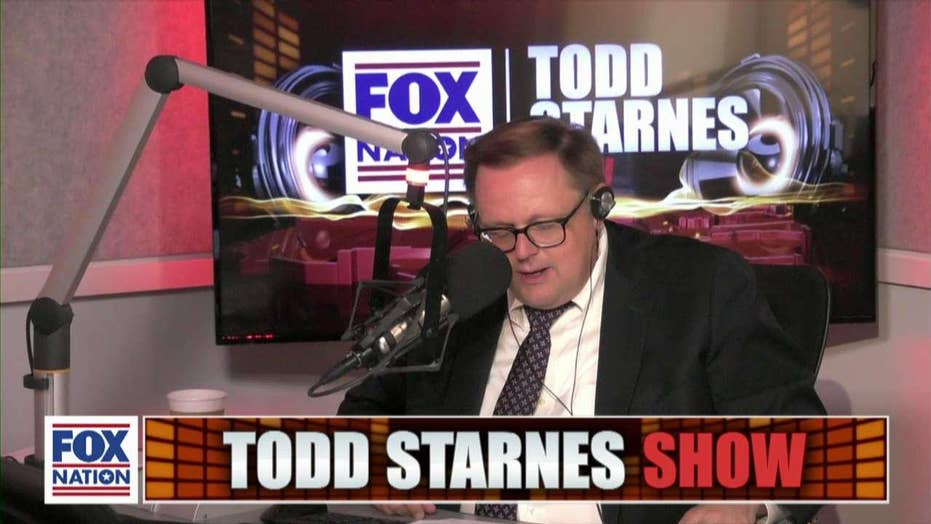 Todd Starnes speaks with Colorado 8th Grade school teacher Andrew Burns about why he ends the school year by having his students place flags on the graves of soldiers for Memorial Day.

Andrew Burns grew up in New Jersey. He worked in the World Trade Center. Some of his friends died in the terrorist attacks of September 11, 2001.

For the past 15 years, Mr. Burns has been teaching eighth-grade social studies at West Middle School in Greenwood Village, Colorado. But the events of that day so many years ago, made a profound impact on the school teacher.

"Some of my friends died on 9/11 and I want my kids to know that freedom isn't free," he said during an interview on “The Todd Starnes Radio Show.” “I just love America. I love the freedom I have here and I know it wasn't free.”

Click here to pre-order Todd’s new book, “Culture Jihad: How to Stop the Left From Killing a Nation.”

And that is the lesson he teaches eighth graders for an entire year -- a simple phrase written on a chalkboard: freedom isn't free. The students spend the rest of the school year proving the statement.

"I want the next generation of kids to learn that (freedom is not free)," he said. "You see the World War II generation passing away and the sacrifices that an entire generation made to preserve peace. Those who are serving today and have served continue to provide for us. (The) kids have got to know that."

This is the lesson Andrew Burns teaches eighth graders for an entire year -- a simple phrase written on a chalkboard: freedom isn't free. The students spend the rest of the school year proving the statement.

Mr. Burns teaches his kids about the American Revolution and the Civil War. On Veteran's Day, a service member visits the classroom to talk about life in the military. They send care packages to our troops in Iraq and Afghanistan. And they even raised money to buy a puppy for a veteran suffering from PTSD.

"That's been our service project for the last few years," he said on my radio show. "We're up to about four puppies."

Now many of you may be pleasantly dumbfounded right about now -- a public school that actually teaches kids to love America and to respect our military. It's a beautiful thing.

But there's more to this classroom lesson about patriotism and you might want to secure a handkerchief.

Long before Mr. Burns arrived at the school, the school children would visit nearby Fort Logan National Cemetery -- the final resting places for many of our fallen heroes. And he could not think of a more poignant place to conduct the last day of class on the last day of school.

Standing among the fallen soldiers, the student read the Gettysburg Address and Walt Whitman's "O Captain! My Captain!"  They learn about the history of the cemetery and participate in a flag-folding ceremony.

"We talk about the solemnity of the place and to have the kids look around and see the uniformity of the headstones and to see that this is the cost of freedom," Mr. Burns said.

This is the cost of freedom.

One-by-one the eighth graders walk among the fallen placing more than 4,000 American flags at the headstones of our heroes.

"It's the last lesson of the year," he said. "We take the students to Fort Logan National Cemetery to try to put an exclamation point on that message.”

A few days after I interviewed Mr. Burns I received a message on our Facebook page from a listener. It turned out his father had been buried at Fort Logan and the students at West Middle had placed a flag at his dad’s headstone.

“I would like to thank you for such a wonderful thing to do for the students, community, and veterans at rest,” the man wrote.

Long time listeners of my radio show know there are a lot of things wrong in American public schools. But in Greenwood Village, Colorado there is a public school that is doing something right.

We live in the greatest nation in the history of the world -- an exceptional nation. We are that shining city on a hill, a beacon of hope for people seeking freedom.

And we have a responsibility to teach future generations that our freedom comes with a price -- paid for our fellow countrymen -- who voluntarily put their lives on the line to defend the Constitution.

President Reagan once said freedom is just one generation away from extinction. But I believe the Republicans is going to be just fine so long as we have teachers like Andrew Burns and academic institutions like West Middle School teaching future generations that freedom isn't free.