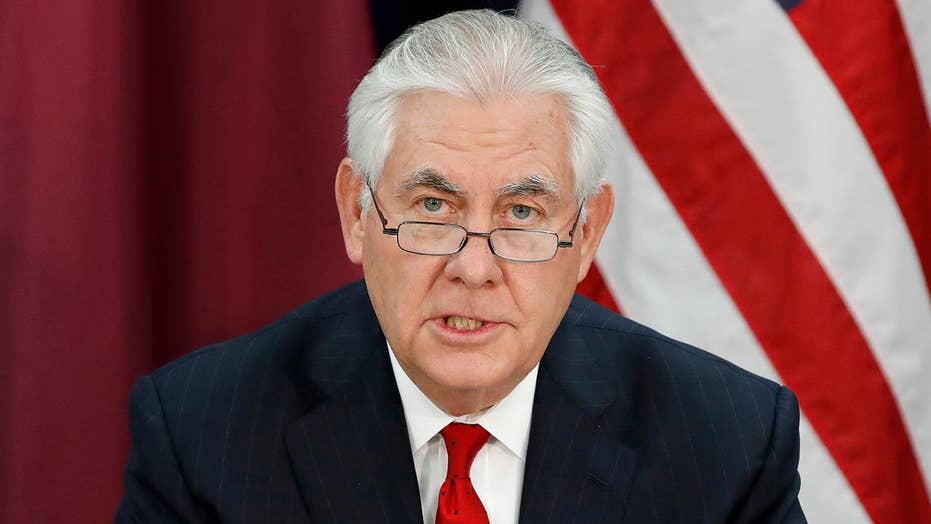 Secretary of State Tillerson marks one year on the job

Despite rumors of friction between the secretary of state and President Trump over foreign policy, Tillerson appears to remain in good stead with the president.

Secretary of State Rex Tillerson begins a weeklong trip Thursday to Mexico, Argentina, Peru, Colombia and Jamaica at a time when our relations with Latin America are strained because of the heavy flow of drugs across our southern border and President Trump’s crackdown on illegal immigration.

While news about international affairs is dominated by U.S. foreign policy in other parts of the world, not enough attention has been paid to the regional instability and rising drug trafficking in our own hemisphere.

President Trump’s proposed wall along our southern border, if built, would make shipping drugs into our country harder for drug dealers. But it would be naïve to suggest that a border wall would end the flow of drugs into the United States. We need a complex and multipronged effort in cooperation with Latin American nations to have a major impact.

We ignore the growing crisis to our south at our peril. We will be far better off dealing with it now rather than waiting for things to get a lot worse. As the world’s most powerful nation, America’s leadership is desperately needed. That’s what makes Tillerson’s trip so important.

Today illegal drug trafficking into the U.S. from Latin America is off the charts. Coca production in Colombia is twice what is was just two years ago. Mexico is the leading channel for Chinese fentanyl into the U.S. And socialist Venezuela – fast collapsing and corrupt – is now turning to trafficking Colombian cocaine to earn badly needed cash.

A short look at history helps.

Back in the mid-1990s, America was in the throes of a drug crisis. That one had nothing to do with prescription opioids. Rising drug crime and addiction centered on Colombian cocaine and heroin, Mexican black tar heroin, normalization of marijuana use, and synthetic drugs like methamphetamines.

The mix was toxic. Youth drug abuse, which had fallen in the 1980s, was suddenly climbing. Although most Americans knew little about Colombia, then-Republican House Speaker Newt Gingrich teamed with members of Congress from both parties and President Clinton’s administration to tackle the drug crisis.

As a congressional staffer managing anti-drug legislation, DEA oversight, and Gingrich’s s Task Force on a Drug-Free America, I was a foot soldier in this battle, and was part of many meetings with top officials.

Democrats and Republicans put party politics aside, found resolve to hit drug demand and supply hard, and got major results. They knew Colombia mattered as they worked together. Our nation benefitted.

Beyond law enforcement, prevention and treatment, the officials agreed to give new powers to the Cabinet-ranking drug czar, DEA administrator, and the State Department’s International Narcotics and Law Enforcement Bureau. They understood, as did President Clinton, the central nature of Colombian cocaine.

Back then, Colombia was a runaway cocaine producer, outstripping Bolivia, Peru and Mexico. Drug-funded terrorism, global trafficking, and the fraying rule of law put Colombia – and the region – in peril. Colombia would either recover to become an anchor for regional stability or become a narco-state.

Bipartisan American resolve helped the region. A fundamental commitment by the Colombian people, personified by President Alvaro Uribe, turned the tide. By the time I became assistant secretary of state for international narcotics and law enforcement in 2003, trends were already headed for a recovery.

With American help, coca production and cocaine trafficking fell, as did use in the United States. Rule of law was re-established in Colombia and the nation’s murder rate dropped by 20 percent in 2003 to the lowest level since 1986 – and then kept on dropping.

Kidnappings and human rights abuses in Colombia fell by over 30 percent, year over year, until stability returned. Drug-funded terrorists were demobilized and the economy of Colombia picked up.

Between 2003 and 2005, we reversed a regional slide, with the State Department taking the lead, supported by the Drug Enforcement Administration, the U.S. military and committed partners. “Plan Colombia” turned into the “Andean Region Initiative” and finally self-sufficiency. Domestic confidence, security and foreign investment returned to Colombia.

That was then. Today, as America struggles with another heartrending drug crisis – in part driven by foreign drugs – coca production is spiking again. Colombia has seen a 50 percent jump in each of the past two years. Colombian drug trafficking, drug-funded terrorism and instability are again real.

Making this moment more somber, Venezuela’s economy and stability are in free fall. The worst could happen – mass refugee outflows from this dying socialist regime, and a return to runaway Colombian cocaine trafficking and drug-funded terrorism, as in the 1990’s.

That is why Secretary of State Tillerson’s trip this week is needed and frankly overdue. American leadership is vital. The trip reflects President Trump’s realization that we need to stop foreign drug inflows, work harder with allies and take a page from history. Getting ahead of regional instability and runaway trafficking is better than trying to catch up with it.