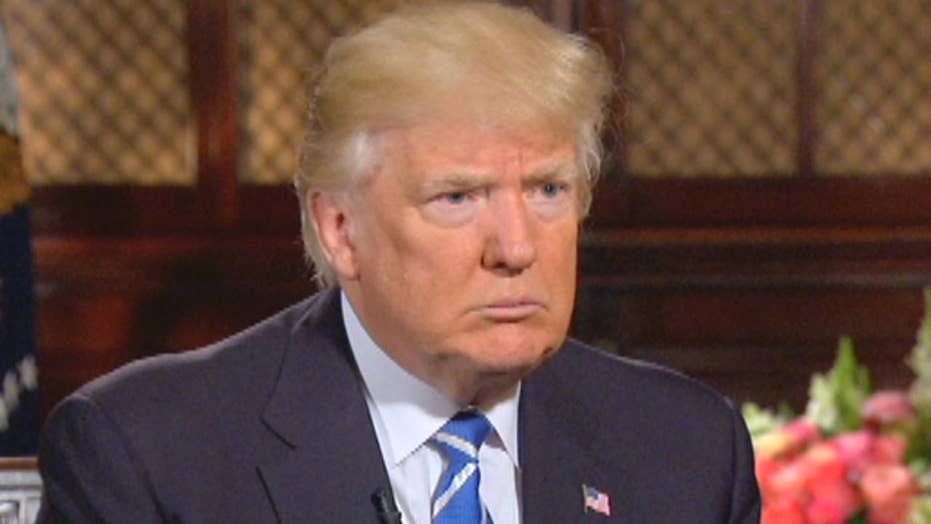 Watch Eric Bolling's interview with the president on the debut edition of 'The Fox News Specialists,' Monday, May 1 at 5 p.m. ET

North Korea is surging to the brink. Advancements in their missile technology and nuclear weapons program will soon put the United States in the crosshairs. As Senator John McCain recently remarked: “A North Korean missile tipped with a nuclear warhead, capable of reaching our homeland is no longer a distant hypothetical, but an imminent danger.”

A policy built around angry diplomatic statements and passive observation is no longer viable. The United States must seriously anticipate the use of force to eliminate this rogue nation’s offensive nuclear capacity.  This is far from a simple task.

When dealing with North Korea, it is critical to appreciate everything comes down to keeping Kim Jong Un and his family in power. That is why diplomatic measures, economic isolation, and international commendation have proven ineffective. As long as the leadership structure remains intact, everything else is of a secondary concern.

While China, North Korea’s primary ally, controls 90% of its trade, Chinese leaders are reluctant to take a hard line on the North, fearing a collapsed regime that would precipitate a refugee crisis and a potentially hostile unified Korea.

Nuclear weapons are deemed the penultimate point of leverage preventing the United States and its allies from toppling North Korean regime. Make a move against Kim Jong Un and you will likely face a nuclear response. Nor are nukes North Korea’s only ace in the hole. They have fortified the border with a huge array of offensive conventional armaments—artillery, missiles, and more. Should a conflict erupt, Seoul, South Korea, which lies just thirty five miles from the boarder, will be subject to an overwhelming attack.

This leaves the United States in a difficult position. Lacking economic or diplomatic points of leverage, military action increasingly looks like a likely path. Unfortunately, the capabilities required to successfully defeat North Korea are in short supply.

Ever since the Berlin Wall fell, the United States has failed to invest in a balanced set of military technologies necessary to engage against a potent foe like North Korea. While it is true that significant funds were expended for military operations in Afghanistan and Iraq, capabilities optimized for counter-insurgency warfare are wholly inadequate for a high-end conflict. A surface campaign fighting mile-by-mile up the peninsula would afford Kim Jong Un more than enough time to decimate the South and launch nuclear strikes.

Instead, the United States needs to consider options that would collapse the North Korean threat as fast as possible. That means hitting targets in a concurrent, decisive fashion to prevent wholesale devastation in Seoul and a nuclear launch. Doing so demands America’s most advanced combat aircraft--the B-2 bomber, F-22 fighter, and F-35 fighter. Their stealth technology is necessary for survival and their advanced sensor capabilities will allow them to locate their targets in an incredibly dynamic environment.

There is just one catch: the US failed to procure enough of these airplanes because they were deemed to be outdated, expensive “Cold War” assets. While it is true that the Cold War is over, that does not mean adversaries stopped investing in advanced defenses. In fact, the world is far more dangerous than it was thirty years ago. This is a major problem given that the United States only has 20 B-2s, 185 F-22s, and a handful of F-35s in the inventory. Out of these, the F-35 is the only one currently in production. It is time for the nation to acknowledge this capability gap and accelerate their acquisition. The same holds true for the newly designed B-21 stealth bomber—an aircraft that will replace planes that are decades old.

The threat posed by North Korea is not theoretical, it is reality. Decisions made over the last several years have left the country in a precarious position. While the bravery of our men and women in uniform is beyond question, dedication to duty and sacrifice can only go so far. We must properly equip them to fight and win.  Failing to make such investments will leave the country woefully unprepared to execute a mission where the alternative to a rapid, decisive victory is unthinkable.

Douglas A. Birkey is the Executive Director for the Mitchell Institute for Aerospace Power Studies. Prior to this position, Birkey served as the Air Force Association’s Director of Government Relations.