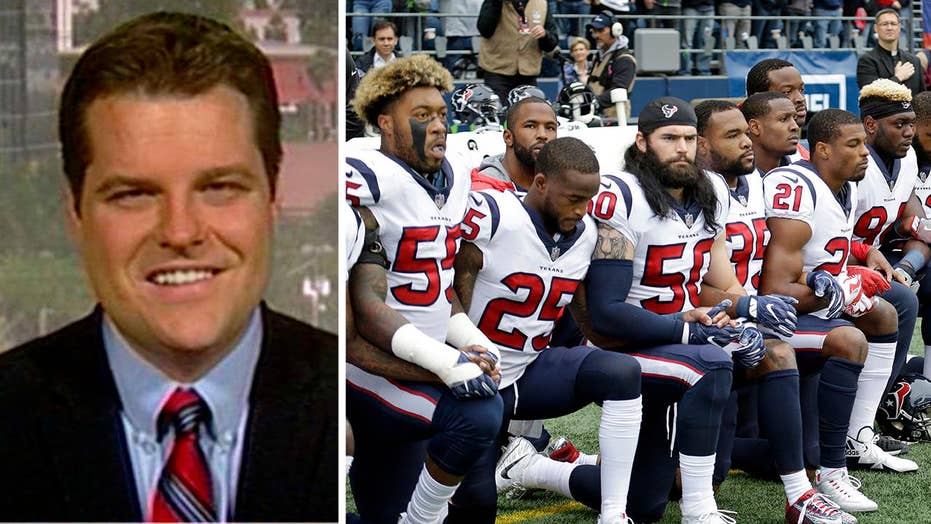 Rep. Gaetz seeks to eliminate tax breaks for the NFL

While we glorify football players for their accomplishments on the field, they are not heroes. I recently visited with a real hero – a young Army sergeant from my congressional district who still gets body tremors when he stands. Bombs bursting in the air exploded over his unit in Afghanistan, leaving shards of metal stuck in his skull.

When I entered his room at Walter Reed National Military Medical Center, he proudly stood at full attention, brimming with nervous energy. I had come to thank him on behalf of a grateful nation, and the sergeant was as respectful as he was inspiring in his patriotism. Although he winced with pain, he would not take the meeting lying down.

We did not discuss his injury or diagnosis. He told me how proud he was of his wife, a teacher at the local high school. And how willing he was to go back to the fight – wherever that star-spangled banner yet waves.

The teacher and the sergeant are the regular folks who make up my North Florida district, which boasts of more military bases than Starbucks, and more veterans than pelicans. These are the folks who do not understand why NFL players would disrespect our anthem or our flag or why the NFL Commissioner's office has embraced this unpatriotic conduct.

Taxpayers pay over 70 percent of the cost of stadiums. Our citizens pay more and more for tickets, and valuations of professional sports franchises have skyrocketed. Player compensation keeps growing. But the NFL Commissioner’s office can choose at any point to stop paying taxes altogether.

Our nation is increasingly diverse in thought, values, and background. Yet throughout our history, America has given proof through many nights that our flag is still here, and that freedom still reigns.

Choosing to disrespect our flag is an over-generalized indictment of the greatest nation on Earth. Kneeling for the anthem does nothing to advance solutions to racial injustice, police brutality, or any other social plight. It is a slap in the face to patriotism itself. It is a statement that America as a country is no longer worth standing for.

It is bizarre to see the NFL attacking an America that has treated it so well over the years. Taxpayers pay over 70 percent of the cost of stadiums. Our citizens pay more and more for tickets, and valuations of professional sports franchises have skyrocketed. Player compensation keeps growing. But the NFL Commissioner’s office can choose at any point to stop paying taxes altogether. Only in America, baby!

Nobody is saying pro-athletes must give up protest rights because of their job. They should simply protest on their own time, and on their own dime, like any other American. Owners who require their players to stand for the national anthem and flag should be commended, and the players who choose to play elsewhere have that right.

As for the NFL Commissioner’s office, why do they get special treatment in the tax code in the first place? Why do any professional sports leagues enjoy tax advantages unavailable to regular folks or small businesses? Special loopholes in the tax code for pro-sports leagues will shortchange the U.S. Treasury by over $150 million during the current budget window.

That money would be better spent at Walter Reed.

President Trump has called for massive tax reform to get our economy moving again. We must cut taxes for hard-working Americans, while ending the swampy loopholes crafted by special interest groups. Ending the exemption for pro-sports leagues is an obvious place to start — and President Trump agrees with that, too.

I have offered the PRO Sports Act to abolish these exemptions. Going forward, perhaps pro-athletes won’t just take a knee — maybe they will take a stand for the solutions to the social aliments they observe.

All Americans should and always must enjoy full access to First Amendment rights, but nobody has the right to expect special tax treatment while disrespecting our flag.