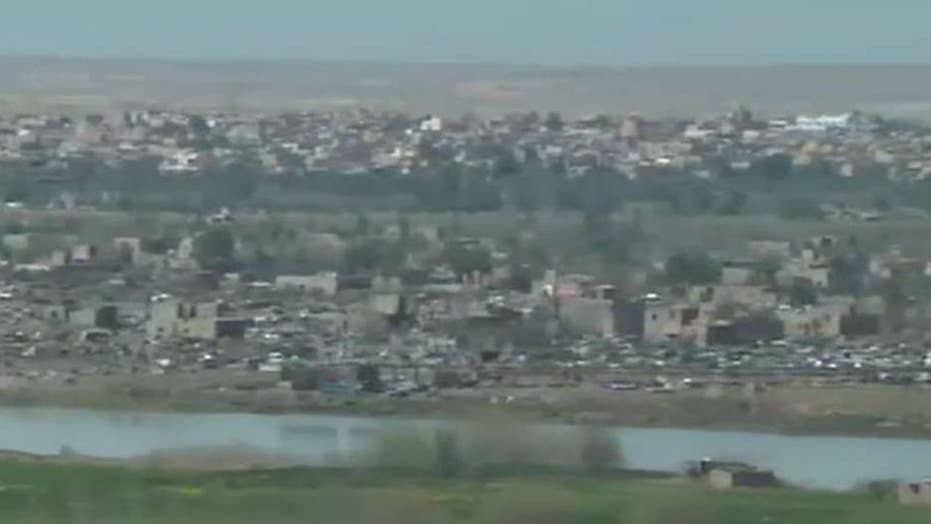 Fox News' Benjamin Hall reports on the 'eerie calm' after U.S.-backed forces drive out the last caliphate camp in Syria.

The last ISIS stronghold is no longer strong. Or held. The last recognized remnant of the terrorist group’s so-called caliphate is gone, Fox News reported Thursday.

This is a milestone victory for the forces of counterterrorism. But it is not the end of the war on terrorism. Unfortunately, the bad guys will be back on the field soon enough.

Rising to prominence quickly, ISIS was the boldest of the bold transnational terrorist groups. At the height of its power, it advanced a claim that Al Qaeda – its former comrade and then competitor in arms – never dared make: control of a territorial caliphate.

In asserting the establishment of an Islamist empire, ISIS signaled the equivalent of the end of times. In a part of the world where honor is power, this was heady stuff. It was a clarion call for all who shared the radical ideology of ISIS – a direct challenge to the Arab world, the West and “the great Satan” (the U.S.) in particular.

It was also disturbingly effective. Tens of thousands foreign fighters answered the call, flocking to join the ranks of ISIS. In addition, ISIS launched a global media campaign that promoted radicalization and inspired terrorist attacks around the world, from North Africa to Europe to the U.S. and Australia.

Taking down the caliphate was crucial. For one, ISIS created a humanitarian nightmare. The group’s so-called “holy” warriors stole, raped, enslaved and murdered with abandon, filling mass graves on a regular basis.

Now that the ISIS caliphate has been ground to dust, the remnants will once again look for a way to regain their honor. To them, that means showing they have the capacity to slaughter and enslave innocents of all creeds, faiths and colors.

As the group grew, it posed a grave danger to regional stability and a terrorist threat worldwide. It also represented a direct challenge to the West: Could democratic nations beat back and defeat an armed Islamist force, or were they nothing more than a “paper tiger,” as Usama bin Laden had claimed?

The physical defeat and geographic eradication of the caliphate is a tremendous humiliation for Islamist radicals. It is as important as the military victory on the battlefield.

But the terrorists won’t go quietly into the night. When bin Laden was chased out Africa, he fled to Afghanistan. It was there that he planned the Sept. 11, 2001 terrorist attacks against the United States.

After allied troops ejected Al Qaeda from Afghanistan, the terrorists sought a way to regain their honor. That led them to foment the Sunni insurgency in Iraq.

And when Al Qaeda was crushed in Iraq, the terrorists looked for another opportunity. That turned into the ISIS uprising in Iraq and Syria.

Now that the ISIS caliphate has been ground to dust, the remnants will once again look for a way to regain their honor. To them, that means showing they have the capacity to slaughter and enslave innocents of all creeds, faiths and colors.

Like the fire brigade that just put out the forest fire, the U.S. and its friends and allies will have to be on watch. The sparks will flare up and try to rage again. The only question is: Where will the terrorists go next?

The scattered remnants of ISIS, Al Qaeda and their ilk roam about the Greater Middle East and beyond. And there is no shortage of places where they can find refuge and recuperate, regroup and rise again.

There’s also no shortage of opportunity for mischief.

The state of Syria remains far from settled. The chaos there is a welcoming environment for terrorism. And while remarkable progress has been made in Iraq, sectarian strife remains ever present.

On top of this, we can’t forget about Iran, the world’s biggest state sponsor of terrorism. Tehran has made accommodations for Al Qaeda before. The mullahs might well help out Sunni extremists again, if it helps make trouble for others.

Meanwhile, North African nations like Libya and Tunisia have good reason to worry about being next on the extremist hit list. And the more sentimental terrorists pine to go back to Afghanistan and turn into a terrorist-controlled killing field again.

It’s a lot of territory to keep watch over – especially when you have to worry about aggression from state powers like Russia, China and North Korea. But we know what happens when America’s leaders drop their guard against transnational Islamist terrorism. Just months before it claimed a “caliphate,” ISIS was pooh-poohed as “a JV team” by President Obama.

We can’t make the mistake of dropping Islamist terrorism from the national and international Bad Guys List. Now that ISIS is down, we must to keep it down. And out.