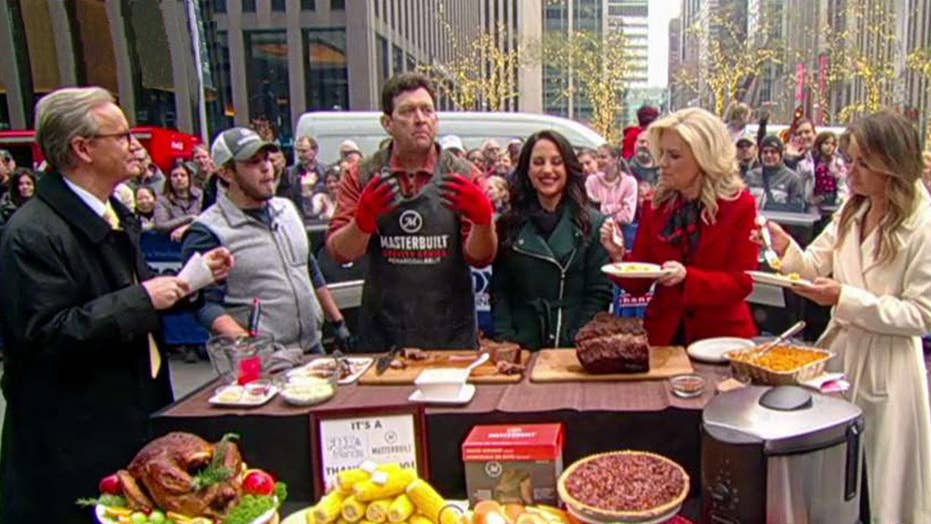 A 'dadgum' delicious Thanksgiving with smoked turkey and prime rib

Chef and author of 'Dadgum That's Good, Too!' John McLemore cooks up a southern Thanksgiving dinner on a digital charcoal grill.

William Shakespeare said some are born great, some achieve greatness, and some have greatness thrust upon them. This time of year reminds me of the third category of person.

Late autumn in my home of Charlotte, North Carolina is when frost is first visible on the grass at dawn. The sight summons a memory from five years ago, of the derring-do of one man. I never got his name, but his actions left one thing crystal clear: Not every hero wears a cape.

I was on the sideline watching my then twelve-year-old daughter Molly, a goalie, play in a regional soccer tournament. We parents had hunkered down in our warm cars for as long as we could. When the game began, we dutifully took our places along the frigid sideline.

It was an unseasonably cold morning for Charlotte. There were snow flurries in the air, the kind that go unnoticed in New York and Chicago, but tend to cause a run on milk and eggs here in the Queen City.

I went with a cloak so thick I could safely have been x-rayed while wearing it, yet somehow was still cold. Other parents, some wrapped in their actual bedding, dispensed with all pretense. All our frozen tundra lacked was a John Facenda voiceover.

As I trudged out into the cold, my eye turned toward the movements of one parent from the opposing side. He backed his pickup to the field’s edge, heaved what looked like a wheelbarrow out of its bed and rolled the contraption toward midfield of our shared sideline, which usually was no man’s land.

It was not a wheelbarrow, although it did have wheels. It was a portable fire pit, already filled with firewood. At midfield he lit a starter log and, as the fire blazed, invited all spectators to warm themselves beside him.

Don’t let anything of this world be the prism through which you see everything in this world. If you do, you’ll miss out on so much truth, beauty and goodness all around us, not least a chance to love.

Prometheus of the Pitch even brought a large container of water to extinguish the flames afterward, which he did with the proficiency of an Eagle Scout. Though the frosty day was windless and no tinder was anywhere nearby, he left nothing to chance.

I visited the same field a few weeks later, toward the end of the soccer season. This time it wasn’t as cold, but a new sign was posted by the entry gate: “No Fires.” Reading it, you couldn’t help but sense its municipal author wanted to lead with “I cannot believe I have to say this, but...”

I do not recall who won the game that wintry day. But all spectators, friend and foe, took turns warming themselves by fire pit guy’s impromptu hearth, enjoying one another’s company immensely.

It’s a special person who can do something that simultaneously unites strangers and conjures a new government proscription into being. A tad cavalier? You bet. But we didn’t beat the spread at Yorktown in 1781 by being timid.

This time of year I’m particularly grateful for fire pit guy, both for his spirit and for the lesson he taught. That indomitable spirit is what made, and makes, Americans exceptional. May it ever be so. And the lesson – a good one for Thanksgiving Day – is simple: when we Americans step back from the struggle, we see how much more unites us than divides us.

Don’t let anything of this world be the prism through which you see everything in this world. If you do, you’ll miss out on so much truth, beauty and goodness all around us, not least a chance to love. That’s true on Thanksgiving Day and every day.

As you gather on Thanksgiving day, I hope you are able to find midfield and there light a fire with those you love, and those you can love better.