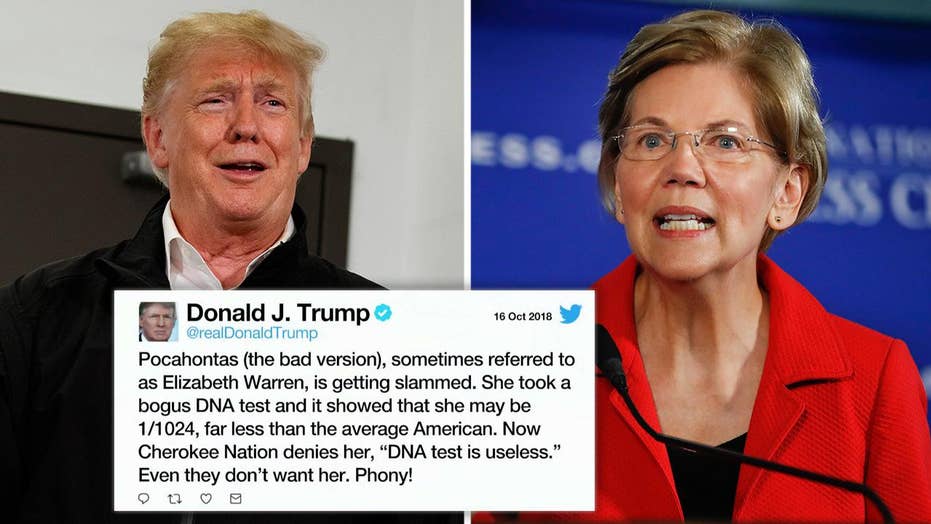 President fires back at the Democrat senator's DNA test results on her heritage; Peter Doocy reports on the firestorm over the senator's roots.

President Trump has been on another winning streak, and the Democrats are desperate for attention. Their problem? All the attention they get is also a win for the president, as it reminds us why he won in 2016 and why winning again in the midterm is so important.

Let’s start with something the media takes little heed of: The record job openings for the summer. CNBC’s headline says it all: “Another great sign for the economy: Job openings hit an all-time high in August.” CNBC also noted, the “survey also found a near-record amount of quits for the month, indicating workers’ confidence in finding new positions.”

That’s right. Not only do Americans have a job, but Trump has created an environment where we have more control over what we’re doing, and know we can find something better for ourselves and our families. Americans are in charge of their lives again.

TAMMY BRUCE: SUSAN COLLINS' SPEECH TELLS US A LOT ABOUT THE GOP AND AMERICA

One of the reasons you don’t hear about the president’s legislative, policy and leadership success touted in the media is because they’re covering the mobs and chaos brought to you by the Democrats. While many are wondering what the Democrats could be thinking by encouraging “incivility” and violence, it is beginning to make sense: They want to give the media something to cover other than the continued blossoming of the country, while distracting their own base from the fact that everyone is better off now than they’ve been in 17 years.

The Democrats, however, are following the Obama rule book — they’re obsessed only with themselves. The remarks by former Secretary of State Hillary Clinton and former Attorney General Eric H. Holder Jr. encouraging chaos and “kicking” people with whom you disagree were deliberate comments that will ruin people’s lives. No one is going to save the poor sap who thinks he’s following the orders of his heroes. Clinton isn’t going to bail anyone out of jail, and former President Barack Obama isn’t going to be anyone’s lead defense attorney.

On Monday, within a week of the Clinton and Holder calls for harassment and violence, Sen. Susan Collins’ Bangor, Maine, home received a letter that required local and federal law enforcement action. Her street was cordoned off, her home blocked off with yellow police tape, and an agent in a hazmat suit was photographed placing a letter in a protective bag.

Sending an apparently lethal envelope to the home of a senator because you don’t like how she voted would fall into the “uncivil” category of things, right Hillary?

In the meantime, Sen. Elizabeth Warren continued to promote the Obama agenda by thinking only of herself and her preferred political future. The Democratic senator from Massachusetts released a DNA test that she (and the pliant legacy media) declared proved her Native American ancestry. But not really.

The real story is that Warren’s DNA was compared to Latin Americans, not Native Americans.

“The genetics researcher who reviewed Senator Elizabeth Warren’s, D-Mass, DNA in an attempt to counter President Trump’s ‘Pocahontas’ jibes compared her samples with those from people in Colombia, Mexico, and Peru rather than Native Americans in the U.S.,” the Washington Examiner reported.

“[The researcher] however, didn’t compare Ms. Warren’s DNA against Native Americans who live in the continental U.S., citing cultural reluctance to submit to DNA tests. Instead, he used recent samples from other countries whose populations presumably share a lineage during human settlement of the Americas about 15,000-25,000 years ago,” the newspaper noted.

Former Obama 2012 campaign manager Jim Messina was none too happy about the situation. He tweeted: “Argue the substance all you want, but why 22 days before a crucial election where we MUST win house and senate to save America, why did @SenWarren have to do her announcement now? Why can’t Dems ever stay focused???”

“Why now” Jimmy? Because Barack Obama destroyed the Democratic Party as he focused on creating a cult for himself. Because Obama trained everyone to think only of him (and when he was gone, of themselves), not of the party which would require Democrats to actually think about the country and their constituents.

Which brings up an important question: What is Messina thinking the Democrats should stay focused on exactly? There’s only one narrative that Warren’s Native American gambit disrupted — that a Democratic mob is out there and will hurt you if you don’t vote for them.

Strangely, Messina was not in the news complaining about Clinton’s endorsement of incivility or Holder’s call to kick people. Because that is the official narrative. His public wrath, therefore, was for Warren and her little DNA story.

Trump’s and the Republicans’ good few weeks, and turnaround in the polls, started with the exposure of the Democratic mob in the Senate trying to destroy Justice Brett M. Kavanaugh, but that was simply the beginning.

The Democratic Party meltdown continues with threatening the electorate and displaying a preference for chaos. Why? They believe being honest about their actual policy agenda of impeachment (of Trump and Justice Kavanaugh), gun control, open borders, and punishing Americans for disobeying them in 2016, must be hidden — and the only thing they can muster up, like all bullies, are threats of violence and discord.

The bottom line is this: Liberals who care about their and the country’s future must put the current incarnation of the Democratic Party out of its misery and join everyone else who is voting in the midterm for peace, prosperity and civility.