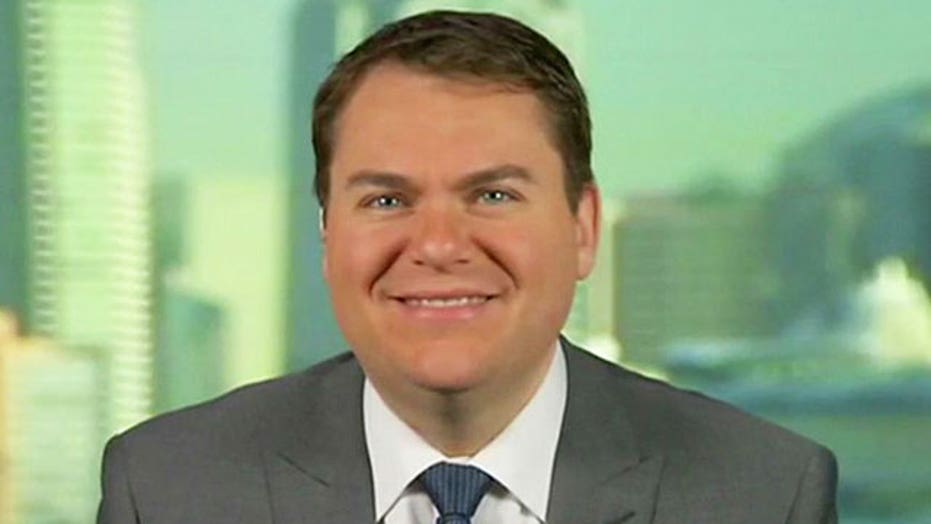 Let's pretend you're a screenwriter assigned to develop a character to run for Congress in California in 2014. You need a compelling story, so you make him an orphan at 13 – wait, even better his dad leaves the family two weeks before his mother died – and then social services splits up his brothers and sisters leaving him alone in the world.

Despite those challenges he perseveres, putting himself through a top-tier college and then building and selling two multimillion-dollar companies.

Thus financially secure, he decides to dedicate himself to public service and runs for City Council.

In his first term he works across party lines and four years after his first election he passes major pension reform that saves the city money and protects the retirement savings of thousand of people.

For good measure, you make him openly gay and in a committed relationship, the first to feature his partner in campaign literature. He’s the perfect candidate to send to Washington, D.C. and, of course, he’s a Democrat, right?

Wrong. The real story proves that truth is stranger and sometimes better than fiction. Your character already exists in Carl DeMaio of San Diego – except that he’s not a Democrat, he’s a (gasp!) Republican.

No one in Hollywood would write this screenplay -- unless it was a tragicomedy that ends with the candidate realizing the error of his ways and fleeing to the nurturing embrace of doe-eyed and loving Democrats. Exit weeping.

Isn’t his story what everyone who fights for equality says they’ve been fighting for?

When I talked to DeMaio, he said he doesn’t want to emphasize his sexual orientation or his challenging childhood – he prefers to talk about the fiscal condition of the country and his candidacy to defeat freshman Rep. Scott Peters, a Democrat. But because he is who he is, and because his opponents are making an issue about his sexual orientation and lying about his record, he’s willing to talk about it. And he’s disrupting all of the stereotypes.

For instance, DeMaio has been the target of homophobic attacks. But where are those attacks coming from? It’s not always from the far right social conservatives you’d expect; rather, it’s been from DeMaio’s left – the liberal and Democrat-affiliated groups that you’d think would be proud that an openly gay successful businessman has decided to run for office.

One false attack drew the attention of the San Diego Ethics Commission. An anonymous left-wing group funded a SuperPac and sent mailers of DeMaio Photoshopped next to a drag queen to neighborhoods with a majority of elderly and African-American voters, knowing that such a photo would depress support for DeMaio.

That was so egregious and false that the group was fined by the city’s Ethics Commission, but even after that, and with his 100 percent voting record with the LGBT community, the Left still didn’t speak up to defend him. They told DeMaio, “It’s complicated.”

I’m sure. The Right, on the other hand, did speak up about it.

As the race heats up and DeMaio gains in the polls ahead of the Republican primary on June 3rd, the LGBT groups have gone from silence about his candidacy to actively working against him.

“Despite claims that they insist on tolerance, diversity and acceptance on all political issues, I suspect that they really want to keep intact their alliance with unions so that they don't upset their funding sources and coalition. The Democratic groups need the GOP to remain the bogeyman because if the Republicans are no longer a threat, who needs to donate to these LGBT political groups?” he said.

Full disclosure: I am a former employee of the San Diego city council, where I worked with Ric Grenell, now again a colleague of mine at Fox News Channel, and who currently consults on the DeMaio campaign.

I left San Diego in 2001 and never spoke to DeMaio until recently. But I still know some of the players, know the political terrain and how the district in which he’s running leans-conservative (it’s relatively new district because of redistricting, but the area’s seat traditionally has been held by Republicans).

Which makes me wonder: If they work actively against a Carl DeMaio, how exactly have the LGBT groups come to define “equality”? What do they actually want, if not someone like DeMaio? Does he not embody the openness, financial success and equality they envisioned?

It reminds me of my first lesson in the brutal identity politics for women candidates that I learned in Washington, D.C. In 2002, former Rep. Connie Morella (R-Md.) was running for re-election. I admired her. I wanted to be like her. She had earned the endorsement of the National Organization for Women, but when a freshman Democrat named Chris Van Hollen challenged her in 2002, NOW dropped its support of this accomplished Republican congresswoman.

I was shocked and confused at the time. Now I’d hardly be surprised.

If you’re a Republican woman, you’re mostly on your own when it comes to support from traditional women’s groups.

Many black Republicans find the same lack of support -- just ask Allen West, Tim Scott or Mia Love. As we’ve seen, nobody does lockstep like the Left.

But to me, DeMaio’s story is different to because it crosses the line from opposition to outright sabotage.

For instance, The Victory Fund, which is a group that says it supports any openly gay candidate, first told him that he couldn’t win when he was considering running for mayor in 2008 against the now disgraced former winner of that contest, Bob Filner.

And so while DeMaio does the hard work of taking the heat in front of social conservative crowds and slowly winning them over, the LGBT community continues to pat itself on the back and give one another awards and accolades.

But the person least interested in DeMaio’s sexual orientation is, predictably, DeMaio himself, who labors mightily to stay focused on the issues that truly concern him.

“Our economy is in the tank. We’re in a national debt crisis. The progressive agenda in D.C. is not producing results. Washington politicians from both political parties can't defend their broken programs, so they have to play the shiny object game on social issues,” he says. And so he has to find a way to talk about everything all at once, while pointedly not talking about his sexuality.

And it’s working. DeMaio has a strong record to run on, and his policy platform is solid. He is an entrepreneur who says that the economy needs to be turned around. He believes that he would not be able to succeed in today’s economy as he did in the past.

People who want that tried and true campaign message of hope and change see it in DeMaio. That seems especially be true for younger folks. The next generation hears his message and seems to agree – even DeMaio’s college tour is going well, which should encourage campus-shy Republicans.

Next month, President Obama will travel to California for fundraisers for the DCCC, and he’ll be raising a lot of money to help his fellow Democrats – no matter how white, male, middle-aged and straight they are.

It’s understandable to me that a president wants to protect an incumbent and that DeMaio winning in San Diego worries the Democrats more than other races. As DeMaio says, “They could stomach losing the Democratic freshman's seat to a fire breathing stereotypical Republican - but an openly gay man? That would upend their world.”

I wonder if anyone in the media will ask the White House about what the president thinks about how Carl's been treated, and if he condemns those tactics. Well, we can dream. At least we can hope the president doesn’t repeat any of the lies that have been spread about DeMaio.

In his first campaign ad, DeMaio included a photograph of his long-time partner, Johnathan. A reporter called to ask him about this provocative political move. DeMaio was surprised, “Didn’t every candidate put their loved ones and their strongest supporters in their ads?” That’s what I like about this candidate – throwing the surprise back in the face of conventional thinkers.

DeMaio recently told me that he believes he represents the majority of Republicans. He may be right. Most of the Republican Party has moved, however incrementally, beyond the parochial issues of race, gender and sexuality.

Will the Democrats and liberal groups manage to do the same? If so, we can truly move beyond the social issues battleground and begin tackling the actual problems we face. And an openly gay Republican in a committed relationship is surely not one of them.