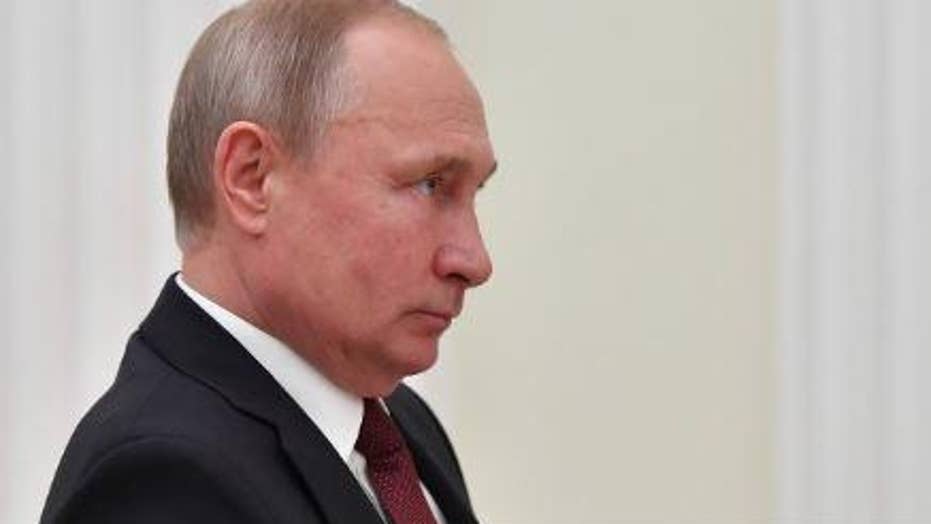 Putin's stern warning: Russia will target US with new weapons

Russian President Vladimir Putin warns that Russia will aim new hypersonic missiles at the U.S., should it deploy new intermediate-range missiles in Europe.

August 23 marks the 80th anniversary of the Molotov-Ribbentrop Pact, the infamous neutrality treaty that secretly divided Poland, the Baltic States, and Romania between Nazi Germany and the Soviet Union. The 1939 treaty offers lessons for any nation engaging with Russia today, especially those which were once part of the former USSR.

Russian President Vladimir Putin, who served in the KGB and was director of the Russian Security Police, has defended Stalin’s decision to sign the pact. For Putin, like Stalin, regime security is paramount, even if it means fracturing Europe, compromising international institutions, and an alliance with the devil.

Since mounting a massive cyber attack against Estonia in 2007, Russia has invaded and occupied Georgia; conspired in Syria’s and Iran’s attacks on civilians in Syria; poisoned a former Russian military intelligence officer with a chemical nerve agent; and interfered in U.S. and European elections.

Putin also seeks to destabilize the U.S. internally, drive a wedge between the U.S. and its NATO allies, and enhance control over Russia’s regional sphere of influence, most especially Ukraine.

For Putin, democracy is an existential threat, especially in the former Soviet Union, whose collapse Putin once called the “greatest geopolitical catastrophe of the 20th century.”

The Kremlin is behaving more like an aggressive and dangerous rogue state than a member of the community of nations.

Putin is bent on reviving the ethos of the Soviet evil empire. Just as containment and deterrence effectively countered the Soviet Union during the Cold War, they are similarly applicable today against Putin, the KGB operative in the Kremlin.

Sir Winston Churchill, who united his country and the West in common cause against dictators, would undoubtedly have been ringing alarm bells in Trafalgar Square over Russia’s multifaceted aggression, especially against Ukraine.

Never hesitant to tell the unpopular truth, it was Churchill who presciently and forcefully argued against the appeasement of Nazi Germany. Speaking of the neutral nations that refused to join the fight against Hitler, Churchill said, “Each one hopes that if he feeds the crocodile enough, the crocodile will eat him last. All of them hope that the storm will pass before their time comes to be devoured. But … the storm will not pass. It will rage and it will roar, every more loudly, ever more widely.”

For Putin, democracy is an existential threat, especially in the former Soviet Union, whose collapse Putin once called the “greatest geopolitical catastrophe of the 20th century.” Nothing threatens Putin’s regime security more than Ukraine, a democratic neighbor with a bright economic future and sizeable Russian-speaking population. Worse for Putin, Ukraine is an aspiring member of the EU, with which it signed a free trade agreement in 2016, and NATO, which is assisting Ukraine with its cyber defense.

In the short term, Putin wants to ensure that Ukraine is so politically dismembered and territorially fractured that NATO and EU membership are out of the question. Long-term, his objective is the destruction of Ukraine as a state. Putin doesn’t want a successful democracy next door serving as a beacon of hope and inspiration for his own domestic opponents who are denied basic civil liberties, including freedom of expression and assembly.

Following Russia’s illegal annexation of Crimea, the West imposed sanctions and the G-8 suspended Russia’s participation. In May 2018, the Trump administration delivered Javelin anti-tank missile systems to Ukraine. But the country still remains under an increasingly intense and dangerous Russian siege.

Warnings without serious policy measures to influence a change in Russia’s nefarious behavior only encourage more aggressive operations. The West is running out of time to draw and enforce a red line, with the intelligence, military, diplomatic, and economic measures that would enable Ukraine to deter Russian aggression.

The U.S. and its allies should mount a full-court press in the public square, including inside Russia, to expose Putin’s nefarious Ukraine policy, which so negatively impacts the economies of Russia and the region. Ukrainian President Volodymyr Zelensky’s planned White House visit is a propitious opportunity for the U.S. and Ukraine to discuss bilateral cooperation at the highest level.

Churchill would have recognized Ukraine as being on the front lines against Russian espionage and military, cyber and economic attacks. If the U.S. fails to follow his example, and does not lead a coalition against the Russian crocodile now, we will only have ourselves to blame when Putin comes for us next.