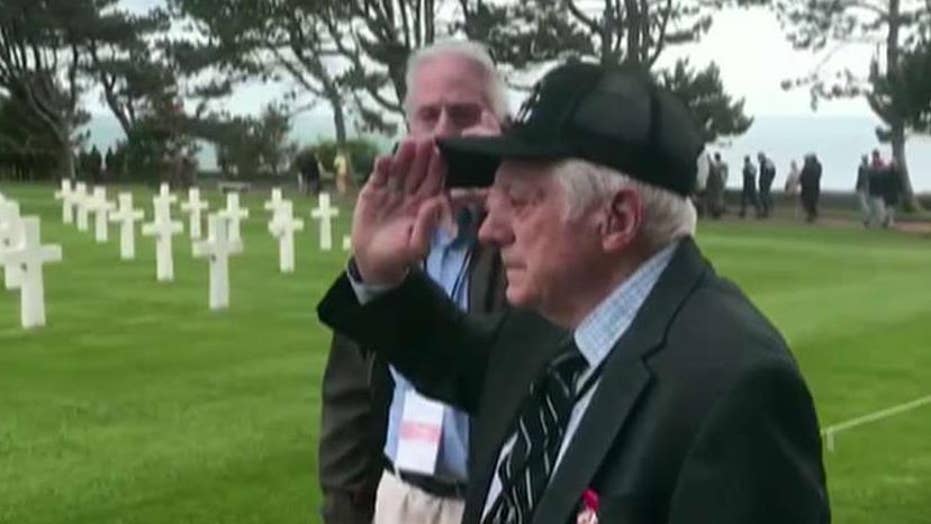 WWII Navy vet Jack Gutman travels back to Normandy with the help of his son Craig Ciampa.

Some 80 years ago, on Aug. 23, 1939, Nazi Germany and the Soviet Union signed the Molotov-Ribbentrop Pact, formally known as the "Treaty of non-aggression between Germany and the Union of Soviet Socialist Republics."

The world was shocked — and terrified — by the agreement. Western democracies of the 1930s had counted on the huge resources of Communist Russia, and its hostility to the Nazis, to serve as a brake on Adolf Hitler’s Western ambitions. Great Britain and the other Western European democracies had assumed that the Nazis would never invade them as long as a hostile Soviet Union threatened the German rear.

The incompatibility between communism and Nazism was considered by all to be existential — and permanent. That mutual hatred explained why dictators Adolf Hitler and Josef Stalin both despised and feared each other.

Yet all at once, such illusions vanished with signing of the pact. Just seven days later, on Sept. 1, 1939, Germany invaded Poland. World War II had begun.

After quickly absorbing most of Eastern Europe by either coercion or alliance, Hitler was convinced that he now had a safe rear. So he turned west in spring 1940 to overrun Denmark, Norway, Belgium, Luxembourg, France and the Netherlands.

Hitler accomplished all that relatively easily, failing only to conquer Great Britain with an exhaustive bombing campaigning.

During all these Nazi conquests, a compliant Stalin shipped huge supplies of food and fuel for the German war effort against the West. Stalin cynically had hoped that Germany and the Western democracies would wear themselves out in a wasting war — similar to the four horrific years in the trenches of the Western Front during World War I.

Communism then easily would spread to the Atlantic amid the ruins of European capitalism. Unlike Czarist Russia in 1914, this time around the Soviets wanted to stay out of a German war. Instead, Stalin rearmed during the non-aggression pact with Hitler.

Stalin, of course, had no idea he had created a Nazi monster that would quickly devour all of Continental Europe — and turn to its rear to eye a now-isolated Soviet Union. Much less did Stalin realize that the battle-hardened German war machine would soon overrun his country in a surprise attack beginning on June 22, 1941, a little less than two years after the signing of the Molotov-Ribbentrop Pact.

The non-aggression pact in a way had also ensured that a European war would soon turn into a global massacre that left roughly 65 million dead. At the time of deal, imperial Japan was fighting the Soviet Union on the Manchurian-Mongolian border. The Japanese were de facto allies of Nazi Germany. They had assumed that Stalin’s fear of an aggressive Germany meant the Soviet Union would have to worry about a two-front war against both Germany and Japan.

But now, the surprise agreement stunned the Japanese, who saw it as a German betrayal. It left them alone against the superior forces of Russia’s eastern armies.

Japan quickly withdrew from its losing Russian war. In time it signed its own non-aggression pact with the Soviet Union, in April 1941 — ironically, just months before Hitler’s "Operation Barbarossa," the massive invasion of Russia.

Japan correctly concluded by the betrayal that Hitler’s Germany could not be trusted and deserved tit-for-tat duplicity. So Japan never joined Hitler’s surprise invasion of Russia. Instead, the Japanese turned their attention to the Pacific and especially the vulnerable British and American bases in Singapore, Burma, the Philippines — and Pearl Harbor.

In sum, the August 1939 non-aggression pact ensured the German attack against Great Britain and Western Europe. It also convinced Hitler that Russia was vulnerable, gullible and appeasing, and could be overrun in weeks following an invasion.

Finally, the deal ended all Japanese ideas of fighting the Soviet Union on the ground from the East in partnership with Nazi Germany invading from the West. Instead, Japan turned toward the vulnerable British and American eastern forces.

In sophisticated times, we sometimes forget that time-honored concepts like the balance of power and military deterrence — not good intentions and international peace organizations — alone keep the peace. When the pact destroyed fragile alliances and encouraged German adventurism, war was certain.

The final ironies? The Soviet double-cross of the Western democracies eventually ended up almost destroying Russia, which bore the brunt of an empowered Germany.

The redirection of Japanese war strategy to target America finally brought the United States into World War II, which ensured the destruction of Japan and Germany.