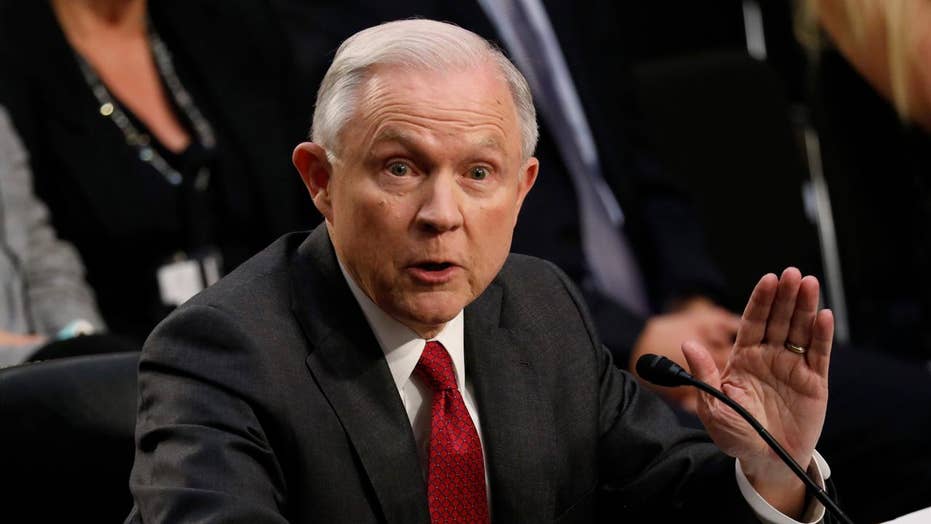 Sessions: I did not recuse myself from defending my honor

June 13, 2017, may be remembered as the day in which the Democratic campaign to take down Donald Trump over the Comey investigation finally fell apart. Attorney General Jeff Sessions came to defend himself against a series of baseless charges, and was treated by several Democratic senators with the contempt that might seem excessive had he been the head of a particularly nasty criminal syndicate.

No one watching the hearing could fail to be impressed by the Attorney General’s candor, by his willingness to open himself up and answer all of the charges directed his way. At the same time, the badgering of the witness by Senators Mark Warner (D-Va.) and Kamala Harris (D-Calif.), the refusal to give him time to answer, the attempt to throw him off guard, the heavy-handed speechifying under the guise of posing a question, and the innuendo of Senator Martin Heinrich (D-N.M.), are going to be remembered as an embarrassment that will ring down the curtain on the investigation.

It’s pretty easy to smear people, but then there comes a time when the person smeared gets a chance to respond, and that’s what happened when Jeff Sessions took the microphone. “I recused myself from any investigation into the campaign for president,” he said, “but I did not recuse myself from defending my honor against scurrilous and false allegations.”

Then there’s the idiocy of supposing that, if the Russians had wanted to influence the campaign, the way to do so would be to send the ambassador to meet with a campaign official in approximately the most public venue in all of Washington.

One of those smears is reported to have come from former FBI Director James Comey, who speculated that then-Senator Sessions had met with the Russian Ambassador at the Mayflower Hotel on April 27, 2016. That’s when then-candidate Trump delivered a major foreign policy speech in the hotel’s ballroom. As it happens, I know something about that. I was there, as someone who, along with Bob Tyrrell and my wife Esther Goldberg, had prepared a draft of the speech. We sat ourselves down in the second row, and it was thrilling to hear some of our words played back for us.reported to have come from former FBI Director James Comey,

Just before the speech was given, a bunch of bigwigs entered the ballroom from a private reception where they had met with Trump. Jeff Sessions was one of them, and he sat in the row just ahead of us. We shook hands and settled back for the speech. When it was over, I saw him hang back a bit, and then exit alone. If he had met with a Russian ambassador I think I’d know. And it didn’t happen.

Comey had no evidence about any such meeting. If he was the source of the rumor, that tells you something about his willingness to smear people.

Apart from that, there’s the idiocy of supposing that, if the Russians had wanted to influence the campaign, the way to do so would be to send the ambassador to meet with a campaign official in approximately the most public venue in all of Washington. Behind us the cameras were all rolling, and in the room were a few great Washington Post reporters, Bob Woodward and Robert Costa. And that’s where the Russians and Sessions were going to have their cozy little tête-a-tête? As Tom Cotton noted, that’s not exactly how James Bond did things.

Just as ludicrous was the suggestion, from Sen. Heinrich, that the Attorney General’s refusal to reveal private conversations with the president amount to obstruction of justice. In like circumstances, Eric Holder refused to reveal private conversations about government policy he had had with President Obama. As long as we’re a government of separation of powers, Congress doesn’t have the right to direct the executive branch in the exercise of its duties, or to require that executive deliberations about how to carry out those duties be revealed to it.

“Consistent with long-standing Department of Justice practice,” said Sessions, “I cannot and will not violate my duty to protect confidential communications with the President.” Sessions made clear that, while he wasn’t invoking executive privilege over the matter, he was not going to talk about private conversations with the president in order to preserve his right to do so. Only the president could invoke the privilege, said Sessions, and if he disclosed the nature of the conversation before the committee he’d deprive the president of that option. That was a perfectly clear statement of principle, which the Democrats tried to twist against him, in an especially fatuous manner.

If you didn’t see the hearings, I invite you to catch a moment or two of them on YouTube. You’ll see how a gentle and decent man, one who feels dishonor like a stain, acquits himself against the scurrilous attacks by people in every respect his moral inferiors.