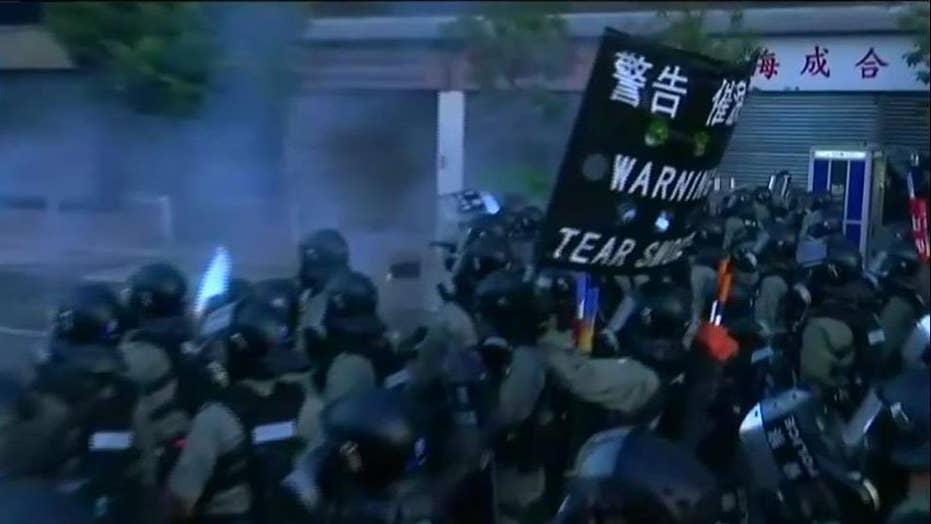 China retaliates against US for Hong Kong support

As tensions remain high in Hong Kong, the United States has just sent its clearest message yet to Beijing: we will lead the world in standing with the people of Hong Kong as they defend their long-cherished freedoms and autonomy against the Chinese Communist Party’s growing aggression.

One of the new tools enabled by the law is enhanced authority to allow the administration to sanction individuals responsible for some of the most egregious violations of the civil rights guaranteed to Hong Kongers: extrajudicial rendition, arbitrary detention, torture, and forced confession, as well as other infringements of human rights.

JAMES CARAFANO: WHAT HONG KONG UNREST TELLS US ABOUT CHINA'S PLANS FOR THE REST OF THE WORLD

These powers will help ensure that the people of Hong Kong are not subjected to the same oppressive laws that China inflicts upon the mainland and instead maintain the vital freedoms, like the independent political, judiciary, and economic systems that they are guaranteed under the 1984 Sino-British Joint Declaration and Hong Kong’s Basic Law.

It should come as no surprise that Beijing is not pleased with America’s strengthened posture, attacking the law as a "piece of waste paper" and "serious provocation against the entire Chinese people." Hong Kong’s special economic status under the “one country, two systems” framework provides tremendous material riches to the Chinese Communist Party, so the threat of losing that capital flow is no doubt harrowing.

But that framework has also ingrained a distinct set of values -- including a desire for basic civil rights and the rule of law -- in the people of Hong Kong, leaving them with an increasingly separate cultural-political identity from the mainland.

For Chinese President Xi Jinping and the rest of the Communist Party, this is unacceptable. It poses a threat to the central legitimacy of the regime, which is contingent on stability derived from ideological and cultural conformity.

Whether in Xinjiang, Tibet, or elsewhere, China has worked to squash what it sees as threats to that conformity and to sinicize disparate populations. Even if Beijing’s strategies differ individually case by case, we cannot allow them to apply the same general rulebook to the people of Hong Kong.

Worryingly, we’re starting to see signs of this. At Beijing’s behest, Hong Kong police and security forces are escalating their use of force to stamp out the city’s growing protest movement, yielding indiscriminate physical violence and extensive urban destruction.

Now multiple citizens of Hong Kong have tragically lost their lives amid the crackdown. Thousands more have been detained, and we have seen reports of others interrogated and tortured for their participation in the protests.

American policymakers too often fail to keep pace with the Chinese Communist Party because we underestimate their intentions and do not take them seriously. In recently leaked internal documents, Xi Jinping declared that China must use its “organs of dictatorship” in its “struggle against terrorism, infiltration and separatism,” showing “absolutely no mercy” to those who threaten his regime. The party defines security by the absence of those threats at home and abroad, leaving us with no clear limits to the party’s ambition.

To ensure balance and deter Chinese aggression, we must take these threats seriously -- and be ready to act to defend our national interests, the God-given rights of all, and the rule of law.

Our Hong Kong Human Rights and Democracy Act -- and the powerful tools it has authorized -- is an important step that demonstrates America’s unwavering commitment not only to the people of Hong Kong but also to establishing a balanced and sustainable long-term relationship with China.