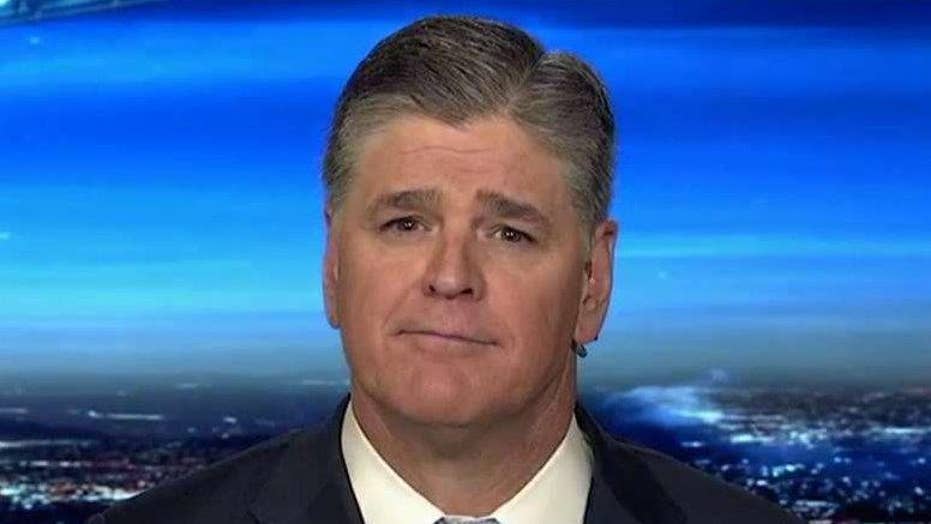 Hannity: It's time to end the illegal immigration crisis

From the very beginning of Donald Trump’s historic run for the presidency, he said combating violent crime carried out by illegal immigrants would be one of his top concerns.

His law and order stance and vow to secure the border was one of the reasons the American people elected him with 306 electoral votes. And his words from back in 2015 carry a prophetic poignancy in light of the horrific rape of a 14-year-old Maryland girl in a high school bathroom, allegedly by two much older immigrants. One suspect is here illegally, and the other’s immigration status is not yet clear.

Trump was mocked mercilessly in the alt-left propaganda media and roundly roasted by Hispanic activists following those comments. Here's a small sampling of what his critics said.

“When you say that immigrants from Mexico are criminals and rapists, isn't that spreading hate?” Univision anchor Jorge Ramos wondered.

“I’m outraged,” said Latin American activist Ana Maria Salazar told CNN. “I can't understand how is it possible that a presidential candidate for the United -- who wants to be president of the United States can speak and use hate language.”

“The natural reaction is to think that he's a clown, let's ignore him,” Feliz Sanchez, of the National Hispanic Foundation for the Arts, told MSNBC.

Now that President Trump sits in the White House, violent crimes carried out by illegal immigrants continue to take place, including last week’s brutal rape by suspects aged 17 and 18. Despite their age, the alleged rapists were attending high school as 9th graders.

This terrible crime is just the latest in a long list of Americans who are victims because of illegal immigration.

During the presidential election, the murder of Kate Steinle became national news. She was gunned down in the summer of 2015 in front of her parents in the sanctuary city of San Francisco. The killer was an illegal immigrant who had been deported five times.

These high-profile incidences are just the tip of the iceberg. Last year, Fox News Channel’s “Hannity” held a town hall with then-candidate Trump, and we had mothers whose children were killed at the hands of illegal immigrants. It was a sobering moment.

Their heart-breaking stories unfolded, underscoring their personal tragedies as well as twisted local government policies that seem to place people who sneak into the U.S. above innocent Americans.

“My son was an integral part of a community, and his life was cut short by a repeat criminal,” Laura Wilkerson told us.

“As the illegal drove by, he shot into the passenger side,” said Sabine Durden, whose son was also killed by illegal immigrants. “My son was sitting at a red light, waiting for it to turn green. He was less than a mile from his home.”

For years, I have been raising real concerns about illegal immigration. Back in 2014, Texas Gov. Rick Perry and I sat in on a border security briefing. I learned that in the previous seven years in Texas alone, illegal immigrants had been responsible for about 642,000 criminal offenses.

Between 2011 and February 2017, illegal immigrants were responsible for 1,162 homicide charges, 68,151 assault charges and 6,098 sexual assault charges in the Lone Star State.

Of course, Texas is not the only state impacted by criminal illegal immigrants. In 2015, 36.6 percent of all federal sentences were given to illegal immigrants, including convictions for drug trafficking, kidnapping, and murder.

Between 2013 and 2015, despite the dangers listed above, the Obama administration released 86,288 criminal illegal immigrants right back into the general U.S. population. You won’t hear about that in the alt-left media. Thankfully, we have a new president, and he has a new attitude.

“I met with many American families whose loved ones -- sons and daughters, husbands and wives -- were viciously killed by illegal immigrants,” Trump said recently. “These American victims and their families were ignored by the media. The media doesn't want to talk about it.

President Trump is right: We can never forget those whose lives were destroyed by illegal immigrants. And we need to demand a secure border and an end to local policies that allow illegal immigrant criminals to prey on innocent Americans.