On Thursday, we were in Texas covering the president's very important trip to the southern border. He toured border facilities. He met with officers at a border patrol station. He attended a security briefing, and he sat down with the victims of illegal immigration.

And meanwhile, Democratic lawmakers were 1,800 miles away in the comfort of their Capitol Hill offices, where they still refuse to reopen the government and even negotiate, all because President Trump had the audacity to try to improve border security -- something they supported just a few years ago.

Think about it. In order to obstruct the president's agenda, the hate-Trump Democrats, hate-Trump media actually have to pretend that border security doesn't matter. That walls are somehow immoral -- walls they voted for in the past. And that it is, of course, one big "manufactured crisis." And they keep saying it again and again and again.

Of course, the hate-Trump Democrats and their best friends, the hate-Trump media, are constantly now repeating that exact talking point. In other words, the media are nothing but an extension of all things Democratic Party because they are all saying the same thing. They all sound all alike. They all say the same thing. One big talking point repeated again and again.

But we do lose 300 Americans every week because of the 90 percent of heroin that crosses that southern border.

On Thursday, "Daily Caller"-Sirius XM Patriot's Kerry Picket had the opportunity to ask Nancy Pelosi to defend her "manufactured crisis" stance on the border. On the the family of California police officer Ronil Singh, who was killed the day after Christmas by an illegal immigrant, and other victims of illegal immigrants, Pelosi said, "What I would say to families like that is what I say to the president, regularly. These are tragic situations. There's a tragic situation at the border. Two little children died in the custody of the border patrol. But the plural of anecdote is not data. What the president is proposing will not eliminate those possibilities."

So, Nancy Pelosi, is she going to look Officer Singh's family in the face and say that's a "manufactured crisis"? I wonder if she would tell these families that lost their loved ones that that doesn't really count as real data, that this is a "manufactured crisis." I don't think those families are seeing it that way. These are real human beings, real Americans, law-abiding people. We have families that are being uprooted and destroyed, lives senselessly taken forever.

Speaker Pelosi, Chuck Schumer, this is not a manufactured crisis. These are real statistics, real people, real lives and many deaths. This is about life and death.

These are the facts that the mainstream media and the Democratic Party refuse to show you. They are all in-sync together. They're just an extension of each other. 4,000 criminal aliens were arrested for homicide, 30,000 criminal aliens were arrested for sex crimes, over 100,000 for violent assaults. And last year, 800 gang members were apprehended at our border. That's a 50 percent increase over 2017.

And keep in mind, every seven days, 300 Americans are dying. 17,000 individuals with criminal records were apprehended trying to cross the border. And 60,000 inadmissible or illegal immigrants are turned away from our borders every single month. And over the last 30 days, 20,000 children were smuggled or trafficked right here into the United States. 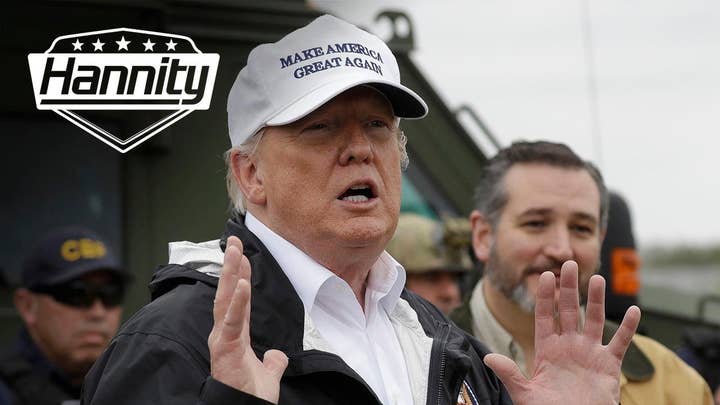 On the other side of the border, the crisis is also very real. One out of three migrant women who make this treacherous, dangerous, arduous journey to our southern border are sexually assaulted. We need to protect people on both sides of the border. Approximately, 7 in 10 migrants have reported being victims of violence during that dangerous trek, and an average of 50 children every day require emergency medical care after they arrive at the southern border.

Now, Speaker Pelosi, Chuck Schumer, this is not a manufactured crisis. These are real statistics, real people, real lives and many deaths. This is about life and death.

Adapted from Sean Hannity's monologue from "Hannity" on January 10, 2019.