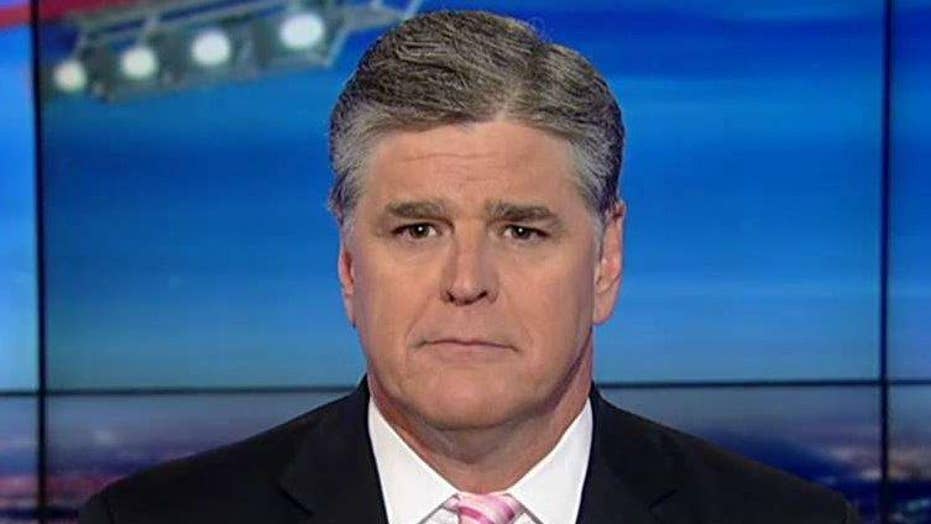 Hannity: Stand and fight for what you voted for in November

There is a massive effort afoot in Washington to destroy President Trump and throw him out of office. It is nothing short of a plot to subvert the will of the American people, and undermine the very foundation of this republic.

It is unlike anything we have seen before in American history. President Trump knows that the naming of an independent counsel to investigate the fake news story about collusion between his campaign and Russia will only advance this plot.

“I respect the move, but the entire thing has been a witch hunt, and there was no collusion between certainly myself and my campaign,” Trump said. “I think it divides the country. I think we have a very divided country because of that and many other things.”

Oddly, during the numerous scandals plaguing the Obama administration, there were no special counsels. Benghazi, the IRS targeting conservatives, the General Services Administration -- their spending scandal -- Fast and Furious, Hillary Clinton's private email server -- we know felonies were committed there -- the Clinton Foundation, the giveaway of one-fifth of our uranium production to Russia, Bowe Bergdahl, the Iranian prisoner swap, the VA scandal, Loretta Lynch and Bill Clinton meeting on the tarmac, surveillance of journalists like James Rosen and The Associated Press, Solyndra, the Secret Service prostitution scandal, unaccompanied minors entering the U.S., Hurricane Sandy funds and Healthcare.gov contracts.

I probably forgot a few.

But the threat against President Trump now is real. It is metastasizing into a clear and present danger, and it is only going to get worse. The Democratic National Committee is now pumping money into what is being called "the Resistance Summer." It's the left's plan to attack and obstruct the president at every turn.

It's time for the American people, those irredeemable deplorables who went to the rallies and voted for him, to stand up for what they voted for. After all, everything we sought is now under attack. We voted for the economy, millions of new jobs and to get people out of poverty, off of food stamps and back in the labor force.

We voted for lower taxes, to repeal and replace ObamaCare, for a stronger military and for a president who could actually say the words "radical Islamic terrorism."

We voted for energy independence, local control of education and a smaller government. Most importantly, we voted to drain the swamp and upend the power structure in Washington, D.C.

The forces working to unseat President Trump don't care about fixing the gigantic mess that President Obama left behind. They don't care because they're inside this corrupt Washington cabal. They are the swamp. They prosper while Americans suffer.

The most dangerous of the anti-Trump forces is the deep state – current and former government employees loyal to Obama and sworn to take down Trump. Former FBI director James Comey, an obviously disgruntled ex-employee, is showing a vendetta against the president. He’s angling for his multi-million-dollar-book deal, a miniseries, primetime interviews, a movie and a job bashing Trump every night on MSNBC.

We've seen the deep state working around the clock, undermining, sabotaging and leaking. The deep state must be purged. We've got to get rid of the people that are now the biggest threat to this republic, and of course, the free election of Donald Trump.

The alt-left, destroy-Trump media is almost as dangerous. Without them, the deep state’s leaks can’t be distorted and peddled. These propagandists are recklessly pushing one manufactured scandal after another, hoping that one sticks and lead to President Trump’s downfall.

The Democrats are naturally aligned against Trump. They've been totally unhinged since the Nov. 8 election, and have been attacking and obstructing the president at every turn. They see this as their solemn responsibility, and care more about their party than their country.

But you would think the Republicans would play their part and go to bat for our president. Truth be told, they never supported President Trump or his agenda. And now they are dragging their feet to implement what you voted for.

Finally, the “never Trumpers,” are the least impactful group. National Review, The Weekly Standard and others who never thought Trump could win. They would have preferred that Hillary Clinton pick the next Supreme Court justice. But now they want vindication and relevance.

Make no mistake, this is now about overriding an election and the will of the American people. We irredeemable deplorables who cling to your bibles and guns must come to the aid of the president we elected. As hard as we fought during the election, we need to fight even harder now or America's precipitous decline will not stop.