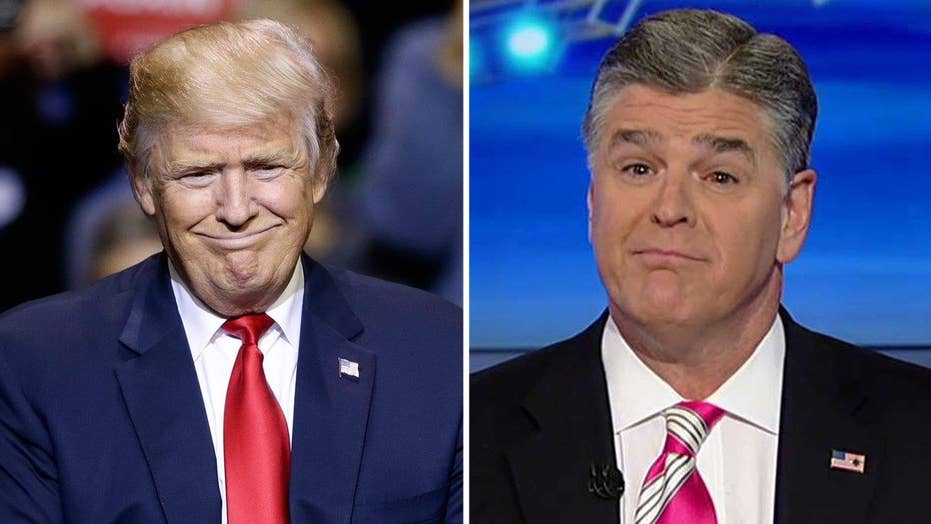 Hannity to Trump: If you want a real friend in DC, get a dog

The political elites of Washington are not President-elect Donald Trump's friends and they never will be.

Trump, has been meeting with the likes of Mitt Romney, Chicago Mayor Rahm "Rambo dead fish" Emanuel and even Al Gore. My advice to the president-elect tonight is, be very careful. In the case of Romney, Trump should remember all of the vicious, nasty and horrible things the 1012 GOP presidential nominee said about him earlier this year when he sought to sabotage Trump’s campaign.

TRUMP WANTS TO BE "PRESIDENT OF ALL THE PEOPLE"

“Dishonesty is Donald Trump's hallmark,” Romney continued, before calling Trump “a phony, a fraud,” whose “promises are as worthless as a degree from Trump University.”

Mr. Trump, do you really want him in your Cabinet?

Then there's Emanuel, the mayor of Chicago. He has deep political ties to President Obama, and of course, the Clintons. Yet, there he was at Trump Tower this week, playing nice only a few weeks after declaring he will oppose Trump’s plan to enforce federal law by ending sanctuary cities.

And what exactly was global warming alarmist and former Vice President Gore doing at Trump Tower earlier this week? In October, Gore warned us all that Trump would “take us toward a climate catastrophe.” He has long accused Republicans of being racists who want the poor to drink dirty water and breathe polluted air.

Finally, what are we to make of Trump telling the "Today" show Wednesday about his budding relationship with the current commander-in-chief?

“I've now gotten to know President Obama,” Trump said. “I really like him. We have, I think I can say at least for myself -- I can't speak for him, but we have a really good chemistry together. We talk. He loves the country.  He wants to do right by the country and for the country. And I will tell you, we obviously very much disagree on certain policies and certain things, but you know, I really like him as a person.”

The office of president deserves respect, but the fact is, President Obama has been one of the worst presidents in American history. Trump is taking the high road to bring the country together. But it is pretty obvious to me that President Obama is putting on a front. Fox News’ Ed Henry reported that Obama is planning a farewell tour in mid-January, with major speeches in up to three cities. The likely goal: To undermine Donald Trump before the inauguration.

Obama has been harsh in his criticism of Trump, and there’s no doubt that will continue long after he leaves office. He is a divisive, radical left-wing ideologue, always was, always will be.

The Republican leadership in Washington is finally coming around to supporting Donald Trump. But I'm an old Reagan guy, and I think it's worth remembering his admonition, his famous line, "Trust but verify."

Washington might seem like a nice place, but as Trump has said, it's really a swamp. And as soon as things get even a little bit tough, these newfound friends from the political class will turn on him on a dime.

President Harry Truman is often quoted as saying, “If you want a friend in Washington, get a dog.” President-elect Trump is reportedly set to get a first pup named “Patton.” That will make one friend. If he wants another, he should get Patton a playmate.