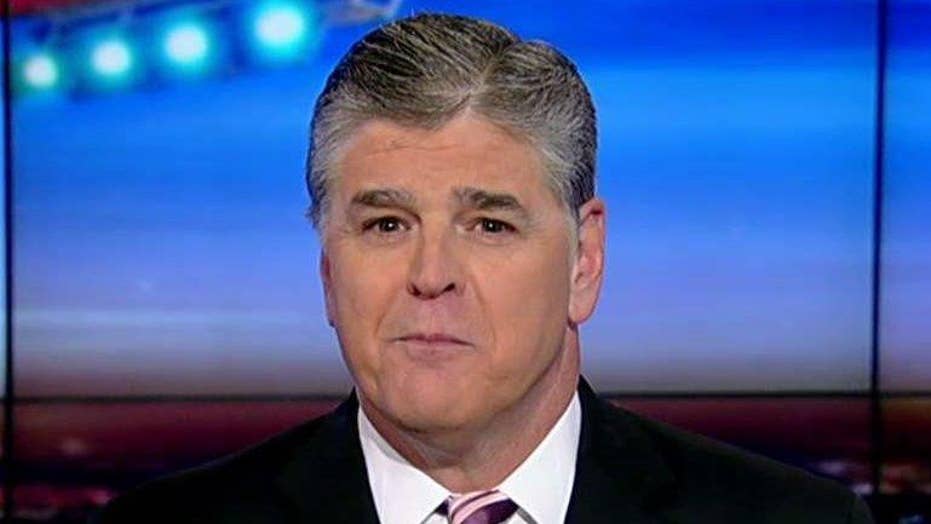 Hannity: I can no longer let the slander against me slide

There is a well-orchestrated effort by the intolerant left in this country that is designed to silence every conservative voice and by any means necessary. I know, because now they are coming after me.

I've worked for radio for 30 years and I've been at the Fox News Channel for 21 of those.  I’ve endured countless attempts to smear, slander and besmirch me. Every second I am on the air, there are people out there recording and monitoring every word I utter in the hope that I say something they can twist, distort and use against me. They want to destroy my reputation and silence my conservative voice.

These tactics, right out of Saul Alinsky's "Rules for Radicals" playbook, have gotten worse in the age of President Trump. It’s no secret that I support the president. And a lot of folks know I have a pretty thick skin. But now it has gone too far.

I can no longer remain silent and allow the alt-radical left's slander against me slide. From this point on, if any person, group, organization or media outlet lies about me or besmirches my character, I'm going to call them out. And I have hired a team of some of the nation’s best attorneys to help me do it.

I reached my breaking point over the weekend, when an individual who, for over a decade has made the most outrageous allegations against me, resurfaced on a radio show with ridiculous and completely untrue claims. The person is suddenly recanting, after I responded aggressively to the baseless and false smears.

It is not the first time I've had to deal with this individual’s lies about me. Back in 2010, I was raising money for the Freedom Alliance, a charity that offers college scholarships to the children of fallen or injured veterans and their families. In a blog post, the individual falsely accused me and members of the charity of skimming and stealing donations.  Each and every single allegation was proven to be untrue and inaccurate at the time, yet I was never given an apology. No correction was issued.

Now this person has made yet another slanderous accusation. And in response, I released this statement:

"Let me be clear: The comments about me on a radio show this week by this individual are 100 percent false and a complete fabrication. This individual is a serial harasser who has been lying about me for well over a decade. The individual has a history of making provably false statements against me in an effort to slander, smear, besmirch my reputation. The individual has not just slandered me over the years but also many people who this individual disagrees with. This individual desperately seeks attention by any means necessary, including making unfounded personal attacks and using indefensible and outrageous political rhetoric. My patience with this individual is over. I have retained a team of some of the finest and toughest lawyers in the country who are now in the process of laying out the legal course of action we will be taking against this individual. Now, in this fiercely divided and vindictive political climate, I will no longer allow slander and lies about me to go unchallenged, as I see this now to be a coordinated effort afoot to now silence those with conservative views. I will fight every single lie about me by any and all legal means available to me as an American."

This is not about Sean Hannity, or any one person. There is now a coordinated attempt to silence the voice of every outspoken conservative in this country. If we don't stop it right now, there won't be any conservative voices left on radio or television.

I'm not the only one whom these liberal fascists routinely target. Like me, conservatives are monitored on radio and TV. Liberal fascism is alive and well in America today, and its goal is simple: To shut up, shut down and completely silence all conservative voices by any means necessary.

Here's the difference between us: Unlike the left, I don't have any problem with what the other side says. If you want to listen to liberals on radio or TV, read their articles, follow them on social media, go for it. I will answer their free speech with my own. I'll call them out for their bias. I'll explain why they're wrong. I'll debate them. But I'll never, ever say they should be silenced. And I won't support boycotts to attack their advertisers, a roundabout way of silencing them.

Everyone who has publicly supported President Trump is a target. They have gone after and attacked the first lady, President Trump’s daughter and his 10-year-old son. Their goal is to cause as much collateral damage as they can to anybody that supports the president.

If we don't take a stand now, America as we know it -- freedom of speech as we know it -- is over. I believe it is worth fighting for, and if the alt-radical left wants to lie about me, it is in for the fight of its life.