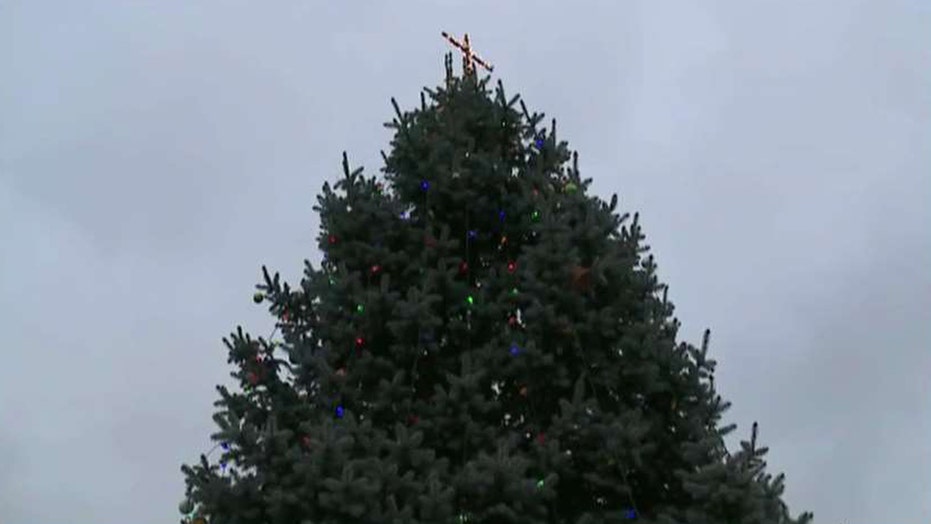 The ACLU’s war with a Christmas tree

A Texas school district said an employee forced her religious beliefs on students after she decorated an office door with a scene from the cherished holiday classic, “A Charlie Brown Christmas.”

Dedra Shannon, who works at Patterson Middle School in Killeen, was told she had to remove a door-length poster featuring Linus, a scrawny tree and that beautiful recitation of the true meaning of Christmas.

“For unto you is born this day in the city of David a savior which is Christ the Lord. That’s what Christmas is all about, Charlie Brown,” Linus said.

Dedra Shannon’s poster was well-received among the staff and students – but a few days later she was told by the principal that the decorations had to come down because non-Christian students might be offended or feel uncomfortable.

Texas Attorney General Ken Paxton accused the Killeen Independent School District of violating the state’s Merry Christmas Law. That law, passed in 2013, stipulates that no school official in Texas can silence a Biblical reference to Christmas.

Click here for a FREE subscription to Todd’s newsletter: a must-read for Conservatives!

“We passed that law precisely because of this type of discrimination against people of faith,” Paxton said. “This is an attack on religious liberty and a violation of the First Amendment and state law.”

But the school district defended their actions.

“Our employees are free to celebrate the Christmas and Holiday season in the manner of their choosing,” the district wrote in a statement. “However, employees are not permitted to impose their personal beliefs on students.”

The district did not explain how Ms. Shannon was imposing her personal beliefs on students. There are no allegations she refused entry to anybody. There are no reports that she forced young people to bow down to Linus. There was nothing of the sort.

“The display in question was a six-foot-plus tall door decoration in the main hallway of the school building, and included a reference to a Bible verse covering much of the door,” their statement read.

That’s not entirely accurate. Yes, it was a Bible reference, but it was also a snippet of dialogue from a Christmas cartoon.

Regardless, the district said their reading of the Merry Christmas Law “requires that a display not encourage adherence to a particular religion.”

Well, here’s a Fox News Alert for the anti-Christian bigots in the Killeen Independent School District – Christmas is a uniquely Christian holiday. It’s about the birth of Jesus.

Ms. Shannon was not requiring anyone to convert to Christianity. She was simply celebrating the reason for the season. But that’s just unacceptable behavior in Killeen’s public schools.

Consider this paragraph in the statement they sent me:

“The Killeen Independent School District celebrates and embraces the diverse cultures and values of our students and employees. We remain proud of our diversity and the community which we serve.”

Somebody’s been smoking too much mistletoe.