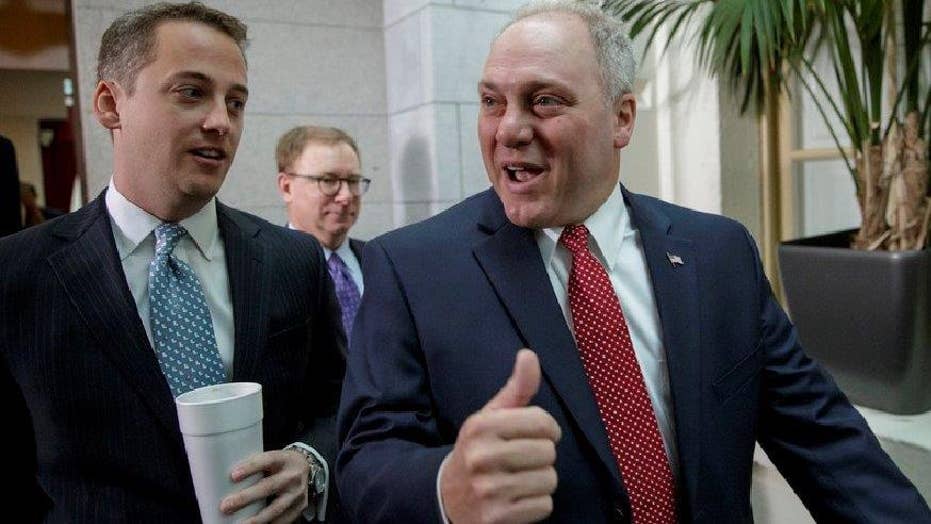 Hospitalized Scalise appears to be improving from his wounds

The bullet shattered the congressman's left hip and tore through the organs and arteries of the pelvis; Doug McKelway has the latest for 'Special Report'

Thursday evening, CBS's Scott Pelley, who officially ended his tenure as the network's Evening News anchor the following evening, told viewers that "It's time to ask whether the attack on the United States Congress Wednesday was foreseeable, predictable and, to some degree, self-inflicted."

It's clear from Pelley's subsequent commentary that his answers to all three elements are "Yes." It's equally clear from the examples he supplied as support that he sees (or wants viewers to see) the problem as predominantly about the conduct of those on the right.

It's time to ask whether the attack on the United States Congress, yesterday, was foreseeable, predictable and, to some degree, self-inflicted.

Too many leaders, and political commentators, who set an example for us to follow, have led us into an abyss of violent rhetoric which, it should be no surprise, has led to violence.

Yesterday was not the first time.

In December last year, a man with an assault rifle stormed into a Washington-area pizzeria to free child sex slaves whom Hillary Clinton was holding there -- or at least that's what political blog sites had said. He fired into a locked door to discover no children in chains.

Sen. Bernie Sanders has called the president the "most dangerous in history." The shooter yesterday was a Sanders volunteer.

You might think that no sane person would act on political hate speech, and you'd be right. Trouble is, there are a lot of Americans who struggle with mental illness.

In February, the president tweeted that the news media were the "enemy of the American people":

The FAKE NEWS media (failing @nytimes, @NBCNews, @ABC, @CBS, @CNN) is not my enemy, it is the enemy of the American People!

Later, at a lunch for reporters, President Trump was asked whether he worried that language would incite violence. His pause indicated it had never crossed his mind. Then he said, "No, that doesn't worry me."

As children we're taught, "Words will never hurt me." But when you think about it, violence almost always begins with words. In "Twitter world," we've come to believe that our first thought is our best thought.

It's past time for all of us -- presidents, politicians, reporters, citizens, all of us -- to pause to think again.

So, "to some degree," Steve Scalise's near death and his continued hospitalization are his, his party's, and Donald Trump's fault. The examples Pelley cited support that interpretation.

Of all the recent examples of violence, Pelley first chose one (the Pizzagate shooting incident) where the person involved did not actually attempt to harm anyone, and from all appearances, and as described by the anchor himself, betrayed no actual intent to hurt a person.

In only choosing this bizarre incident, Pelley somehow missed the long list of actual left-driven violence directed at Trump supporters, Republicans and conservatives before and after last November's election — and that's before getting to the actual threats and incidents involving sitting GOP congresspersons.

Pelley then went on to cite quotes from Bernie Sanders and President Trump using descriptors ("most dangerous" and "enemy of the people") which have been used in the U.S. for decades without violent consequences by politicians, commentators and others to describe opponents.

There are many examples demonstrating this, but two specific items and one general one will suffice:

In the mid-1970s, Washington Senator Henry "Scoop" Jackson described the 94th Congress as "the most dangerous in history as a result of the willingness on the part of some Congressmen to relax our defense posture."

In the mid-1960s, during Ronald Reagan's first and ultimately successful campaign to become California's governor, his opponent, incumbent Governor Pat Brown, called Reagan — you guessed it — "an enemy of the people" in a joint Meet The Press appearance. Brown's smear is more recent than any of the direct "enemy of the people" citations the New York Times used in late February to try to describe Trump's quote as an indication that he's somehow a de facto Stalinist wannabe.

Reagan, Bush 41, Bush 43, and individual Republicans, conservatives and libertarians have been called "an enemy of working people," which in most instances has really meant "an opponent of organized labor's political agenda," more times than anyone could hope to count.

As to Trump's specific quote, it should be obvious by now that his tweet wasn't an opinion. It was an observation, given how many journalists and news organizations, with their managements' clear blessing or at least acquiescence, now insist that they are under no obligation whatsoever to even try to cover the Trump administration in a fair, balanced or even objective manner.

This is not what the country's Founders envisioned when they enshrined freedom of the press in this nation's Constitution. It is indeed fair to say, as Fox News's Todd Starnes has, that the press has become a declared enemy at least of those who elected Trump, and of those who believe in the Constitution and the rule of law:

The fourth estate is indeed the Opposition Party -- and I believe they are complicit in spreading disinformation and propaganda to destabilize the Trump presidency.

Pelley himself has proactively promoted the destabilization effort. In late April, Rich Noyes at NewsBusters correctly criticized the then-CBS anchor for his "hostile approach in covering Donald Trump," and noted that Pelley's posturing had made him "something of a rock star among his fellow journalists." (Thanks to declining ratings, near-rock star status among the media wasn't enough to save Pelley from losing his anchor's perch; his stance arguably contributed to his downfall.)

Pelley also apparently believes he's a mindreader. He just knows that Trump's hesitation when asked about his tweet means that a violent reaction to his comment had "never crossed his mind." How does he know that Trump wasn't measuring his response before delivering? The answer is that he doesn't, but pretends to.

Pelley, in his reference to "Twitter world," only danced around the real reasons why things are different now.

Yes, it's obvious that Twitter, social media and universal access to the Internet have enabled the extreme and violence-advocating views of people who were never seen or heard outside of their own homes to gain attention. But that's nowhere near as much of a problem as the following developments, all of which are either overtly violent or passive-aggressive reactions to a Republican's presidential campaign and his ultimate victory:

As was seen during the fall campaign, Democratic operatives with connections to the Hillary Clinton campaign went to Trump events (and even a Scott Walker event) with the express intention of goading attendees into violent behavior. That the strategy rarely worked, and never on a major scale, is a testament to Trump supporters' relative civility.

Supposedly responsible and publicly visible leftist politicians, entertainers, and pundits have gone beyond aggressive rhetoric, and are now either openly advocating violence or celebrating it when it occurs (with rare challenges from the media when such comments are made), or looking the other way when it happens.

Finally, as the Daily Wire's John Nolte contends with plentiful evidence, the press and the entertainment industry have been "engaged in a not-very-subtle campaign to have candidate/President Trump assassinated" for more than a year. Kathy Griffin's Trump-severed-head stunt and a New York theater's conversion of Shakespeare's Julius Caesar into a Trump-assassination fantasy are only the two most obvious among many manifestations.

Pelley's failures to go beyond virtually irrelevant examples and to note the factors just cited — along with his bogus citation of "mental illness" to describe violent people who know exactly what they're doing, a subtopic which would require a separate post to properly disassemble — demonstrates that his meaning of "to some degree, self-inflicted" is really, "To some degree, Steve Scalise got what he deserved."

Tom Blumer is a contributing editor for the Media Research Center's NewsBusters blog. He has had his own blog, BizzyBlog.com, since 2005.