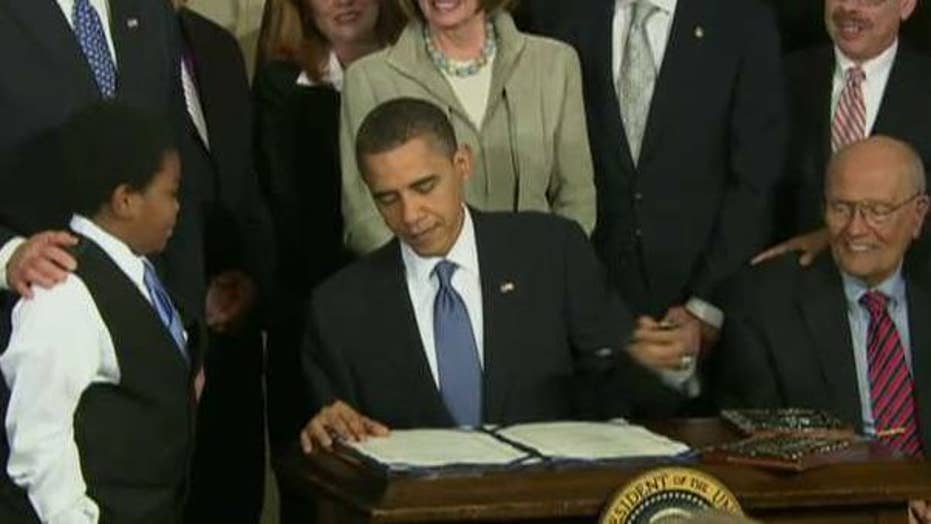 As the calendar flips to 2020, we’re coming up on a decade since the passage of ObamaCare.

Let's start with that opening adjective – "affordable." ObamaCare's champions insisted that their elaborate system of subsidies, taxes, regulations, public insurance expansions and state-level insurance exchanges would ultimately drive down the price of health coverage. Obama himself promised it would save the typical family $2,500 a year.

PAUL BATURA: ROUTINE PHYSICAL SAVED MY LIFE – HERE'S HOW TO MAKE YOUR HEALTH A PRIORITY IN THE NEW YEAR

But the cost of health insurance has skyrocketed over the past decade. Premiums on ObamaCare’s exchanges have increased 75 percent since the marketplaces went live. Off the exchanges, the average employer-sponsored family health plan now has annual premiums of over $20,000.

That was all too predictable. ObamaCare required insurers to cover 10 "essential" benefits, including things like substance abuse treatment and children's dental services, even if consumers didn't want or need them.

The law also ordered insurers to charge all people of the same age the same rate, regardless of health status or history. And it capped premiums for the old at three times those for the young, even though health costs for older people are about five times those for younger people.

All those mandated benefits and extra regulations raise costs for insurers – which they pass along in the form of higher premiums.

Many employers and individuals have not been able to bear the higher costs ObamaCare has brought about. For example, the slice of small firms offering health benefits to their employees fell by one-quarter between 2012 and 2016.

Despite a growing economy and falling poverty rate, the national uninsured rate ticked up last year, from 7.9 to 8.5 percent.

Meanwhile, the only people who can afford coverage through the exchanges are those who receive subsidies from the federal government. More than 87 percent of exchange enrollees in 2019 were subsidized.

And so, despite a growing economy and falling poverty rate, the national uninsured rate ticked up last year, from 7.9 to 8.5 percent.

ObamaCare was also supposed to give people more insurance choices. Those who liked their health plans could keep them, Obama repeatedly promised. For those who didn't have good coverage, the Affordable Care Act would supposedly be a godsend.

Things didn't turn out that way. Many patients have seen their insurance choices dwindle. Aetna, for example, exited in 2018 after years of ratcheting down its presence on the exchanges. Executives reported they'd lost $900 million due to what they euphemistically called "marketplace structural issues."

The average number of insurers in each state declined 10 percent between 2014 and 2020. Consumers shopping for coverage on the exchanges in Delaware and Wyoming have just one "choice" of insurer this year. In 15 states there are just two insurers on the exchanges.

Democrats allege that "sabotage" by the Trump administration deserves much of the blame for ObamaCare's problems. But without the administration's intervention, things could have been worse.

Take the waivers the administration granted to seven states to give them more flexibility over how to spend ObamaCare's individual-market premium subsidies. A Heritage Foundation analysis found that average premiums in the waiver states for benchmark plans – which determine overall subsidy levels for everyone in the market – fell more than 7 percent last year. The result is lower premiums for customers – and lower subsidy bills for taxpayers.

In states that did not get waivers, average benchmark premiums increased over 3 percent.

ObamaCare has left a decade's worth of failure in its wake. Given that track record, Democrats can't be trusted to lead the next round of health reform.