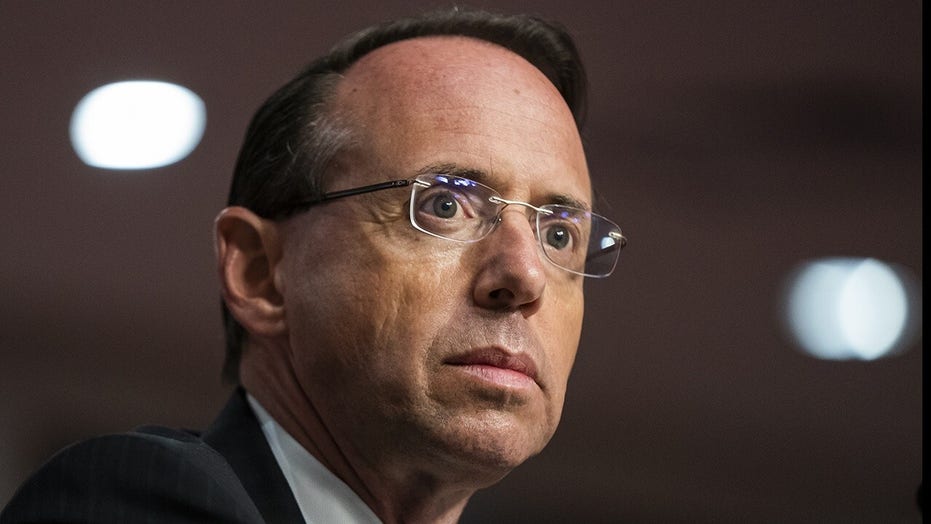 Former Deputy Attorney General Rod Rosenstein was at the red-hot center of the Robert Mueller probe into the phantom menace of Donald Trump's collusion with the Russians. He testified before the Senate Judiciary Committee on June 3.

You may not know that happened. ABC, CBS and NBC ignored it that night. PBS gave the story 55 seconds. NPR gave it four minutes, but those minutes sounded bizarre.

Anchor Mary Louise Kelly said: "May I start with an observation? Does this seem a little out of left field? With everything going on in the country right now, senators are focused today on the Russia investigation?"

CARTER PAGE: ROD ROSENSTEIN TESTIFIES IN SENATE – SHOULD COME CLEAN ABOUT FISA ABUSES TARGETING ME AND OTHERS

Reporter Philip Ewing replied, "The short answer for that is, politics."

The ABC, CBS and NBC evening newscasts devoted 2,202 minutes of coverage to the Trump-Russia collusion conspiracy theory from Jan. 21, 2017, to Feb. 10, 2019. When the Senate Intelligence Committee announced on Feb. 12, 2019, that there was no collusion? There was zero coverage on ABC, CBS and NBC.

The short answer for that? Politics.

These networks, alongside the "prestige" print press, CNN and MSNBC, obsessed about Russian-collusion claims 24/7 for more than two years. It was never "out of left field." It was the fiercely beating heart of the "news" product.

The media repeatedly questioned the legitimacy of President Trump's election and even welcomed bald-faced lies about Trump being a Russian agent. "Bombshell" after "bombshell" led to claims that collusion was going to end Trump's presidency early. Now the papers bury the story on the inside pages.

Under questioning from senators, Rosenstein claimed he was not well-informed at all about everything the FBI – under his direct supervision – was doing to railroad Team Trump. Sen. Ted Cruz, R-Texas, asked him if he knew that the primary source behind the Steele dossier disavowed it as rumors and hearsay. He said no.

Sen. Ted Cruz claimed what the Obama-Biden team did to undermine the Trump campaign, the Trump transition team and the Trump administration made Watergate pale by comparison.

Did he know the Steele dossier was funded through the Democratic National Committee? No. But that partisan pile of hearsay was used repeatedly to authorize spying on former Trump campaign aide Carter Page.

Cruz claimed what the Obama-Biden team did to undermine the Trump campaign, the Trump transition team and the Trump administration made Watergate pale by comparison.

This would explain why the partisan networks skipped over this. They have labored to ensure that Trump – just like George W. Bush before him – was designated as the "worse than Watergate" president.

When Sen. Lindsey Graham, R-S.C., asked if Rosenstein would agree in retrospect that, by August 2017, there was ultimately "no there there" to support the "concept that the campaign was colluding with the Russians," Rosenstein responded, "I agree with that general statement." But no one in that department, and no one in the press, backed down and stopped pushing a false collusion narrative.

The crowning audacity after the Rosenstein hearing came from MSNBC star Rachel Maddow, the Collusion Queen and Duchess of the Dossier. Without uttering the words "dossier" or "Rosenstein," she complained that 53 new subpoenas would be issued to investigate the origins of this get-Trump conspiracy.

With a megaton of chutzpah, she lamented this is designed to "create an air of criminality around Vice President Biden and the whole Obama administration in time for the election in November."

A politicized "air of criminality" still wafts over the Trump administration, thanks to the "objective" media. But they offer no apologies, no retractions, no admissions of fault on the overall Russia mess. Their drumbeat of collusion "news" turned out to be ... "fake news."