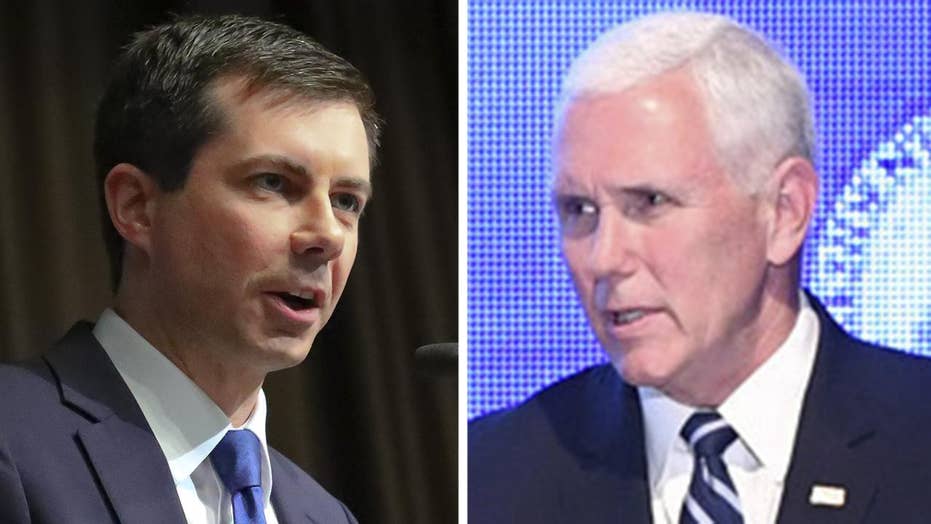 Vice president and second lady fire back at the the 2020 Democrat; Doug McKelway reports.

I’m someone those on the left would have you believe doesn’t exist: a gay, black, conservative, Republican Christian. I’m glad that anti-gay bias doesn’t seem to be hurting South Bend, Indiana Mayor Pete Buttigieg in his campaign for the Democratic presidential nomination, but I plan to vote to re-elect President Trump and Vice President Mike Pence in November 2020.

It’s an important sign of progress that Buttigieg’s sexual orientation, along with his marriage to another man, isn’t considered disqualifying in his bid for the presidency. It certainly would have been a few years ago. Thankfully, more and more Americans are realizing that sexual orientation is irrelevant unless you are looking for a romantic partner.

MIKE PENCE HITS BACK AT PETE BUTTIGIEG AFTER CRITICISM: 'HE KNOWS BETTER'

But while I hope no one opposes Mayor Pete’s White House bid just because he is gay, I’m not ready to support him just because we share that one demographic characteristic.

And I think it’s unfortunate that Buttigieg has tried to portray Vice President Pence as anti-gay. Based on my own research, the work of the Log Cabin Republicans (an LGBT group) and my own experience recently meeting Pence, I know he is absolutely not anti-gay. That false accusation needs to be rejected once and for all.

But isn’t Pence an evangelical conservative Christian? Guilty as charged. So that means he must hate all gays and lesbians and wants to take away our rights, doesn’t it? Actually, no, it doesn’t.

The left has branded Pence as the No. 1 enemy of gays and lesbians, so Buttigieg needs to show he can take Pence on, regardless of the cordial and respectful relationship they shared as Indiana politicians of different parties.

Campaigning at an event Sunday hosted by the LGBTQ Victory Fund, Buttigieg said:  "If me being gay was a choice, it was made far, far above my pay grade ... that’s the thing that I wish the Mike Pence’s of the world would understand – that if you got a problem with who I am – your problem is not with me, your quarrel sir, is with my creator."

I love God and God loves me. I came to a deeper understanding of that particular fact after a tour in Iraq while I proudly served in the U.S. Army. Wartime service in combat helps you see the world in a completely different way.

This message triggers those on the left because they’ve been very successful at convincing a generation of young gays and lesbians to reject God in favor of their cult of intersectionality and identity politics.

When religion is left behind, identity becomes religion. Politics becomes religion. And for many of these disaffected gay youth that I meet, far-left identity politics has become their religion. They worship its most prominent faces and voices like gods. Their Twitter feeds and Instagram posts become their Bible. And when their gods tell them that a politician is the enemy, they listen.

But here’s the truth: In the more than two years President Trump and Vice President Pence have been in office, gay and lesbian Americans have seen very little in terms of anti-gay legislation from this administration.

And according to many news reports, when Pence was governor of Indiana and Buttigieg was mayor of South Bend, the two got along well.

As The Associated Press reported Friday: “During the four years in which they overlapped in Indiana politics, Buttigieg, the South Bend mayor, had a cordial relationship with Pence. The two collaborated on economic development issues. Buttigieg presented Pence with a South Bend promotional T-shirt that said ‘I (heart) SB.’ And at ceremonial events, Pence would lavish Buttigieg with praise.”

For example, in June 2015, then-Gov. Pence called Buttigieg “a dedicated public servant and a patriot.” These aren’t the words of a homophobe, despite what many Democrats would like you to believe about Pence.

So why is Buttigieg woke-signaling now? Obviously, to get votes and campaign contributions from the gay community and others on the left.

The left has branded Pence as the No. 1 enemy of gays and lesbians, so Buttigieg needs to show he can take Pence on, regardless of the cordial and respectful relationship they shared as Indiana politicians of different parties.

A few weeks back, I was invited to the Midwest Regional Conference of Turning Point USA, an advocacy group for young conservatives. Pence spoke at the conference and I had the opportunity to take a photo with him and interact with his team as a part of my duties as a contributor to the organization. As a conservative, I was thrilled. As a gay man, I was unsure.

Why? Because I had heard and read many times that Pence supported so-called “conversion therapy” – the absurd and discredited “treatment” to make gay people straight, as if we were afflicted with a mental illness and needed to be cured. The very concept of “conversion therapy” is demeaning and insulting.

So I decided to get to the root of where this all came from, and was furious when I learned that it was based on a lie and a smear. I stumbled onto a Fox News op-ed written by former Log Cabin Republican Executive Director Gregory Angelo that delved into the origins of the smear.

Angelo found that Pence never advocated trying to change anyone’s sexual orientation. Instead, the governor supported reauthorizing funding to combat the spread of HIV/AIDS only if resources were “directed toward those institutions which provide assistance to those seeking to change their sexual behavior.”

That’s it. A stance that then-Gov. Pence had taken involving the reauthorization of HIV/AIDS funding was twisted by the left, repeated again and again, and used to exploit the deepest fears of gays and lesbians to get them to support Democrats and oppose Republican Pence.

I searched more and more for any other information that supported the claim that Pence supported “conversion therapy” but I couldn’t find anything. I was furious, realizing I and many others had been lied to by the left yet again.

So I went to the Turning Point USA conference. I posed for a photo with Pence and smiled bright and wide. I was proud to be there.

The vice president was welcoming and cordial to this gay, black, Iraq war combat veteran and conservative Republican. Like he was to our gay ambassador to Germany Ric Grenell when swearing him in as Grenell’s longtime partner Matt Lashey held the Bible.

Gays and lesbians are here to stay. Yes, even in the GOP. The vice president respects that. And I, as a gay conservative, can respect his right to his traditional Christian beliefs – even if they aren’t mine.

I support the Trump-Pence team because I think these two men are doing a great job for America and can do more if given another four years in office.

I realize many Americans are opposed to President Trump and Vice President Pence for a variety of reasons. But if this opposition is based on a belief that the occupants of our nation’s highest offices are anti-gay, it is based on a lie of the left.