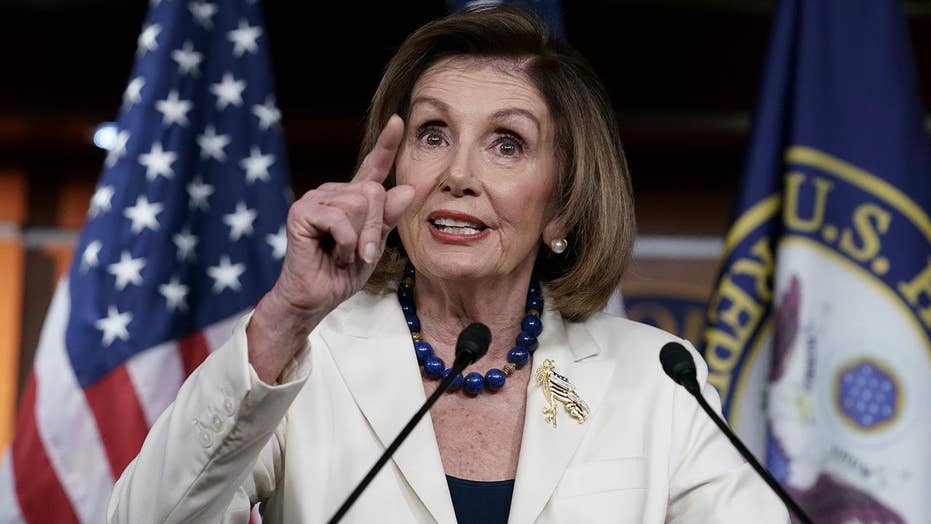 House Speaker Nancy Pelosi, D-Calif., announced Thursday what her radical far-left base has longed to hear: Democrats will proceed with articles of impeachment against President Trump.

But while this might come as a present to Democrats who have dreamed of impeaching President Trump since the day he took office, Pelosi and her Democratic colleagues should be careful what they wish for.

It is already apparent that Wednesday’s impeachment hearing before the House Judiciary Committee was a disaster for Democrats.

The Democratic desperation was obvious in the witnesses they called to the hearing: three rambling liberal law professors with documented anti-Trump biases who lectured the American people on their hatred for this president, rather than providing a shred of evidence to bolster the Democrats’ case.

One even stooped so low as to attack the President’s 13-year-old son to score cheap political points – a far cry from the “solemn,” “sad,” and “serious” approach Pelosi claims Democrats are taking.

What’s more, while Pelosi might preach that this “has absolutely nothing to do with politics,” it is clear this impeachment sham is a blatant attempt to steal the 2020 election away from voters. Democrats refuse to accept the results of the 2016 presidential election and know they can’t beat President Trump at the ballot box in November.

As George Washington University Law Professor Jonathan Turley rightly pointed out at the hearing Wednesday, this impeachment “stands out among modern impeachments as the shortest proceeding, with the thinnest evidentiary record, and the narrowest grounds ever used to impeach a president.”

Fortunately for Republicans, the American people can see right through this partisan charade.

Support for impeachment has only fallen since public hearings began.

And independent voters all across the country overwhelmingly want Democrats to work with President Trump, not against him, on bipartisan proposals like passing U.S.-Mexico-Canada Agreement on trade and measures to lower the cost of prescription drugs.

It was only back in March that Pelosi proclaimed that any impeachment attempt would have to be “overwhelming and bipartisan.”

But in a violation of Pelosi’s own guidelines, when the House voted on impeachment in October the only bipartisan support was against impeachment.

Pelosi has tried relying on our Founding Fathers to lend credibility to this impeachment circus.

But rather than give their rubber stamp of approval, our founders would likely be horrified by the desperate and divisive display Democrats have engaged in.

Alexander Hamilton had the foresight to warn us that impeachment would be prone to abuse rather than driven by “real demonstrations of innocence or guilt.”

Unfortunately, we are seeing the founders’ fears realized because Democrats are wielding the constitutional power of impeachment as a political weapon.

Contrast Democrats’ continued efforts to nullify the votes of 63 million Americans who cast ballots for Donald Trump in 2016 with the president’s record of delivering real results on behalf of the American people.

While Democrats in Washington were staging more political theater paid for by your hard-earned tax dollars, President Trump was hard at work at the NATO summit in London, meeting with world leaders about how to modernize and strengthen the transatlantic alliance.

Thanks to the president’s unprecedented negotiating skills, he was able to secure an unprecedented $130 billion in additional defense spending by NATO allies by getting them to pony up and pay their fair share.

The one silver lining to come out of the Democrats’ partisan witch hunt is that it is only serving to motivate voters to support Republicans as we prepare for the 2020 elections.

In fact, the Republican National Committee raised over $25 million in October alone as the impeachment sham was getting underway.

Combine our financial edge with our strong grassroots ground game and the Republican Party has never been more poised or better positioned for victory heading into an election year than right now.

It’s time, as a Republican website says, to Stop the Madness.

President Trump, with the support of Republicans, continues to deliver victories for the American people. But we can only continue to Keep America Great if we retire the “resist and obstruct” Democrats, reelect President Trump, maintain Republican control of the Senate and take back the House in 2020.