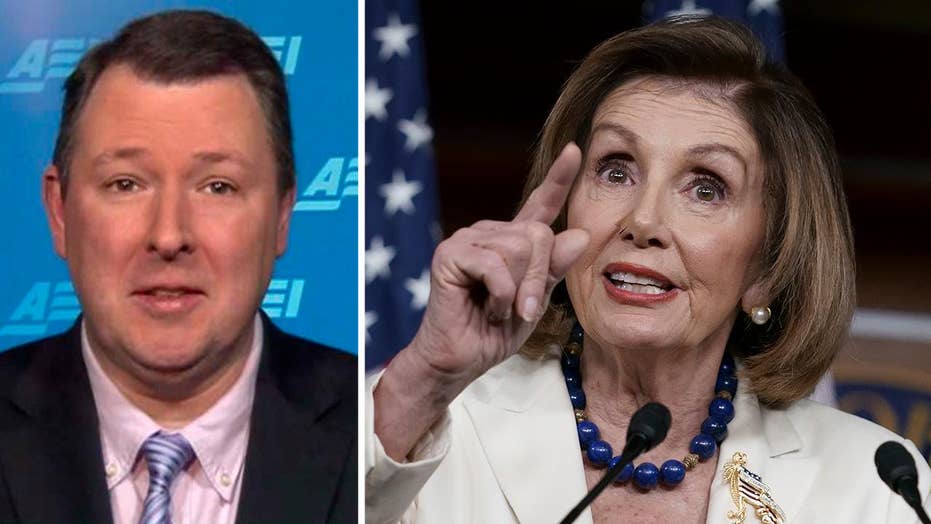 House Speaker Nancy Pelosi’s deranged dream is coming true. Her announcement Thursday that the House will move forward with writing articles of impeachment in an attempt to remove President Trump from office 11 months before the next election marks the culmination of months of false statements and broken promises.

The out-of-touch Democrat from San Francisco is no different than other unhinged radical Democrats – Reps. Alexandria Ocasio-Cortez of New York, Ilhan Omar of Minnesota and Rashida Tlaib of Michigan – who all think they should decide who the next president is instead of the American people.

Since she was elected speaker of the House in January, Pelosi has misled the country repeatedly about the importance of bipartisanship in any impeachment effort and about her concern for dividing the nation.

All of that talk was just a lie to further Pelosi’s crazy goal: impeach President Trump at any cost. By doing this, Pelosi is helping Trump’s reelection prospects and putting her Democratic majority in the House in jeopardy in 2020 at the same time.

Pelosi’s unwise decision to plow forward with a partisan impeachment of the duly elected president of the United States without any evidence of an impeachable offense will forever change America for the worse.

For starters, Trump-hating House Democrats – led by Pelosi, Intelligence Committee Chairman Adam Schiff of California, and Judiciary Committee Chairman Jerrold Nadler of New York –have now lowered the bar for impeachment so far as to render it meaningless.

In fact, their actions probably ensure that the next Democratic president will be impeached if there’s a Republican majority in the House – no matter what. It’s the Pelosi Doctrine – a president can be impeached for anything, as long as blind partisanship prevails.

The House Judiciary Committee’s impeachment hearing Wednesday was a farce. It once again showcased the weakness of the Democrats’ case.

Impeaching a president with the testimony of just four constitutional scholars is a rush to judgment that is doomed to fail. Shame on Judiciary Committee Democrats and the three co-conspirator professors for hurling this witch hunt forward against President Trump.

George Washington University Law Professor Jonathan Turley – who argued against impeachment at the Wednesday hearing – singlehandedly destroyed the left’s faulty narrative. Turley – who said he didn’t vote for Trump in 2016 – was exactly right when he said “agitated passions” are no “substitute for proof.”

So Judiciary Committee Chairman Nadler had a surrogate for one of President Trump’s political opponents arguing in favor of impeachment – but the biased mainstream media just ignored this important fact about Karlan. This point should have been hammered home by Judiciary Committee Republicans.

Furthermore, Harvard University Professor Noah Feldman – who is also an opinion writer for Bloomberg News – should have been asked if he is paid for his op-eds. An answer in the affirmative would have shown that he is on the payroll of another political opponent of President Trump – former New York City Mayor Michael Bloomberg, the owner of Bloomberg News and another candidate for the Democratic presidential nomination.

That was another missed opportunity.

Nadler announced Thursday that the Judiciary Committee will hold a hearing Monday and receive “presentations of evidence” from Democratic and Republican counsels from the Judiciary and Intelligence Committees. This will give Democrats the opportunity to present their scant evidence.

Apparently Schiff is too much of a coward to face the music himself and will instead send lowly staffers to try to make the case against President Trump and his 63 million voters.

Schiff is damaged goods and he’s a proven liar who’s unwilling to tell the American people about his staff’s inappropriate contact with the anonymous whistleblower who got the whole impeachment witch hunt started.

Schiff should also explain why he possesses the personal phone records of his colleague Rep.  Devin Nunes, R-Calif., and journalist John Solomon. These unethical subpoenas are a textbook abuse of power. Who else is Schiff – the unchecked inquisitor – investigating that we don’t know about?

The scheduling of the next impeachment hearing before the Judiciary Committee Monday reeks of politics. As if we needed more evidence that this is all a political campaign circus trying to damage President Trump before the November election.

Monday is the day Justice Department Inspector General Michael Horowitz is releasing his report on alleged Obama administration abuse of the Foreign Intelligence Surveillance Act. The Judiciary Committee hearing can draw media attention away from the Horowitz report.

Just when you think Pelosi and the Democrats can’t sink any lower, they overachieve.

Republicans must be extraordinarily aggressive and prepared to shoot holes in any and all of the proposed articles of impeachment that are being bandied about by the loony leftists on Capitol Hill.

Democrats must be pressured to release all depositions to the public before the hearing Monday – including the sworn testimony of Intelligence Community Inspector General Michael Atkinson. It’s been reported that Atkinson knows about the contact between the whistleblower and Schiff and company.

From 1789 to 1973, President Andrew Johnson was the only president of the United States to face impeachment. He was acquitted in a Senate trial in 1868. But three presidents have faced impeachment proceedings since 1974 – Richard Nixon, Bill Clinton and now Donald Trump. Nixon resigned before he could be impeached and Clinton was impeached in the House but acquitted in a Senate trial

Speaker Pelosi had a golden opportunity to be remembered for doing something important by rising above petty politics and Washington hyperventilating and putting down a horribly partisan coup attempt for the good of our nation. Instead, she rejected that responsible course of action.

Now, this sad episode of a politically motivated and baseless impeachment that Pelosi is pushing will take its place in history next to the infamous concocted impeachment of President Andrew Johnson.

Republicans should make a Senate impeachment trial for President Trump the most painful experience imaginable for the rabid Democrats who are responsible for this disgraceful sham.

The American people must hear from Schiff, his staff, former Democratic National Committee staffer Alexandra Chalupa, the anonymous whistleblower, and former Vice President Joe Biden’s son Hunter Biden under oath, so they finally can get the whole story. The gloves are off.