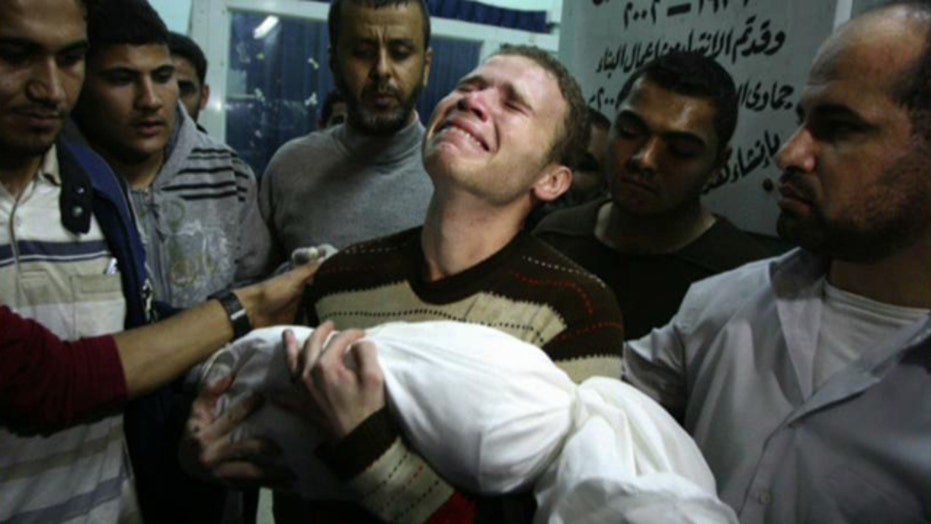 UN: No Israeli involvement in death of Palestinian child

Now that a United Nations report has cleared Israel in the death of an 11-month-old Palestinian infant in Gaza, a death widely attributed to the Israeli military at the time, we are confronted once again with a case where the news media reflexively – and as it turns out, wrongly – blamed Israel.

The infant was the son of a BBC journalist in Gaza, Hihad al-Masharawi. He joined with human rights organizations in blaming his son’s death and those of two relatives killed in a November 14 airstrike on an Israeli rocket assault.

The news media carried pictures of al-Masharawi holding the body of his dead son, and reported on the death as if Israel was responsible.

But a March 6 report by the U.N. office of the High Commissioner for Human Rights has found otherwise. It concluded that al-Masharawi’s home was struck by “what appeared to be a Palestinian rocket that fell short of Israel.”

Israel has long been a convenient target for certain international human rights groups who cast blame on Israel whenever there is military action involving the Palestinians. We have seen this over and over again: in the so-called Jenin “massacre” in 2002, the Second Lebanon War in 2006, Operation Cast Lead in 2008 and Operation Pillar of Defense in 2012.

These groups rely primarily on reports from the Palestinians and they are unwilling to withhold judgment until all the facts are known. Unfortunately, even some mainstream media outlets publish stories based on these biased reports.

When the facts become fully known at a considerably later time and the story is no longer “news,” editors still have a responsibility to acknowledge the inaccuracies in the initial reports and they should be called on to do so. The Washington Post, which ran the original photo on their front page, issued a correction this week. The BBC needs to do so as well.

Another group that owes Israel a re-evaluation is the journalism and free speech advocacy organization Reporters Without Borders, which recently issued a report ranking Israel at 112 out of 179 countries when it comes to freedom of the press and the fair treatment of journalists.

Despite the fact that journalists in Israel “enjoy real freedom of expression” – their words, not ours – Israel dropped 20 places in the index due to what the Reporters Without Borders report termed “the actions of the Israeli Defense Forces in the Palestinian Territories.”

This has understandably left many Israeli and American pundits, politicians and journalists scratching their heads. Yet it is hardly the first time Israel has ranked so low on the index. In 2012, Reporters Without Boarders ranked Israel at 92.

This bespeaks a fundamental problem. As we saw with the Gaza infant’s death, Reporters Without Borders appears to be engaging in the same reflexive rush to blame Israel and presumption of guilt before all of the facts are known and without considering of the complicating factors of the Israeli-Palestinian conflict.

While it is critically important to our global society for journalists to be able to report the news without fear for their safety, and it is equally important for the public to know where journalists encounter danger and even intimidation, the measuring stick used by the World Press Freedom Index raises serious questions about its usefulness in accomplishing these purposes.

It is no secret that there is more criticism of Israel in Israeli society itself than in the rest of the world. The Israeli media are fiercely competitive, and since the founding of the Jewish State among the most important values undergirding Israeli society are freedom of speech and freedom of the press. Israel’s press is lively, often irreverent, spans ideological viewpoints and has perhaps the highest rate of readership by percentage of any country in the world.

But no matter: according to Reporters Without Borders, Israel must be held to a different standard. They single out Israel for, among other violations, targeting “journalists” in Gaza affiliated with the terrorist group Hamas.

Let’s consider this for a moment. We know that Hamas:

- Hides its terrorist activities in civilian areas, including near schools, government and broadcast facilities

- Engages in anti-Semitic propaganda against the Jewish state in its media, including appeals that glorify violence, terrorism and “martyrdom”

- Cynically masks its terrorist endeavors by establishing the appearance of democratic-style institutions, including television stations and newspapers.

Has Reporters Without Borders joined the legion of other international non-government organizations in unfairly applying to Israel a different standard? They concede as much in admitting that Israel would have ranked around 40th in the index had they not included Israel’s activities in the Palestinian territories.

Abraham H. Foxman is National Director of the Anti-Defamation League and author of the forthcoming "Viral Hate: Containing Its Spread on the Internet" (Palgrave Macmillan, 2013).