Eddie Gallagher, Clint Lorance, Matt Golsteyn, Keith Barry, these are names you may know—but for all the wrong reasons.  They are all glaring examples of the unfortunate reality that our own government has become as much a threat to the American warfighter as the enemy they face in combat.

This is not hyperbole. There is a real, ongoing problem in our government right now that places political correctness and personal agendas over the legal pillars of justice and due process.  Unfortunately, there’s another name you should know—it’s a group of men I call "The Biden Four," and for good reason.

In 2007, four decorated veterans sought employment with Blackwater USA to continue serving our country as armed guards protecting U.S. State Department officials in Iraq during the height of the insurgency.

RETIRED ARMY CAPTAIN: EDDIE GALLAGHER'S TRIAL IS A 'DISGRACE,' 'CLEARLY, HE DID NOT MURDER ANYONE'

At the time, the unrelenting violence against members of our military and these contractors was rapidly increasing with regular car bombs and other secondary attacks forged daily. Terrorist insurgents were frequently disguising themselves as civilians or police officers in these attacks, sometimes even using women and children as decoys and human shields.

On September 16, 2007, a senior State Department official was meeting with Iraqi counterparts in Baghdad when a car bomb exploded near their location, prompting an emergency evacuation. 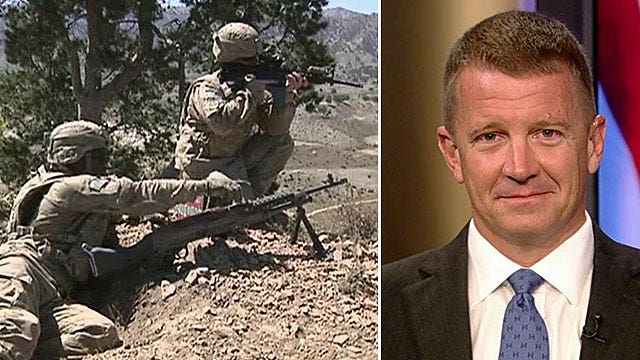 Blackwater security teams were dispatched to secure a safe passage for the convoy through Nisur Square, a known epicenter for insurgent violence where, just weeks before, an explosion left a crater the size of a football field.

As the convoy traveled back to the green “safe” zone, a white Kia vehicle broke away from stopped traffic at the checkpoint, driving aggressively towards the approaching convoy, ignoring commands to stop.

Just days before, a notification had been issued at a briefing warning of a similar car used in other attacks. This, coupled with the surrounding violence and the recent car explosions, is why the security team had every reason to believe that the Kia would attack the checkpoint or even the U.S. diplomat’s convoy.

Utilizing weapons provided to them by the State Department, the security team fired at the Kia to disable the clear and present threat, killing its occupants.

Immediately the security team came under small arms fire from insurgents and, after returning fire, witnesses saw military-aged men flee the scene, abandoning weapons and Iraqi police uniforms over embankments as they ran.

The U.S. diplomat passed through Nisur Square safely and returned to the “Green Zone” unharmed due to the direct actions of the Blackwater security team.

Joe Biden sided with Iraqi politicians over America’s own. This is why I am calling these veterans “The Biden Four.”

Unbeknownst to anyone, the Kia was not a car bomb and, following an investigation led by an Iraqi official with known ties to two insurgent groups, these Blackwater contractors became low-hanging fruit in a political correctness battle led by the same government they had served and protected.

During the investigation, the security team was compelled to provide statements about the incident under threat of termination, these statements that were specifically prohibited for use in any criminal prosecution.  The Department of Justice (DOJ) then unconstitutionally used these statements to charge and indict these men on manslaughter and weapons offenses designed specifically to control and punish gang violence and armed drug dealers, not military veterans.

The Department of Justice (DOJ) then unconstitutionally used these statements to charge and indict the men on manslaughter and weapons offenses designed specifically to control and punish gang violence and armed drug dealers, not military veterans.

Fortunately, the original presiding judge in this case recognized the prosecutorial misconduct and dismissed the charges due to “reckless” violations by the DOJ that had “compromised the constitutional rights of the accused.”

But their ordeal was not over. Enter external pressure from the politically correct left.

In an effort by the Obama administration and a State Department run by Hillary Clinton to appease Iraqi government officials, Vice President Joe Biden announced at a joint press conference with Iraqi President Jalal Talabani in Baghdad that the U.S. federal judge got the decision wrong and that the U.S. government was committed to ensuring that these men be sent to jail for the incident.

Joe Biden sided with Iraqi politicians over America’s own. This is why I am calling these veterans “The Biden Four.”

With the full backing of the Obama administration, the DOJ appealed the original dismissal of charges and prosecuted these men again, this time offering testimony from perjuring witnesses and withholding exculpatory evidence about the attack.

After refusing a plea deal, three of the four men had weapons charges reintroduced.  You are reading this correctly, decorated veterans were punished by their own government for using weapons provided to them by that same government as if they were drug dealers and gang members, paving the way for an unjust conviction.

Four American veterans were convicted by a jury of civilians -- none of whom had ever seen combat.

The Biden Four have already served over four years in prison. They are political pawns who now sit in jail.

They are still there even after the Iraqi politicians got their reelection and President Obama, Secretary Clinton and Vice President Biden scored points with a liberal media that vilifies our veterans as heartless mercenaries playing soldier.

The fact remains, these brave men were sent to prison for doing their jobs, jobs that require split decision-making with real lives hanging in the balance.

President Trump is currently reviewing other cases in which he may exercise his authority as commander in chief to issue a pardon. The Biden Four should be given full consideration for this action.

Our warfighters deserve better. It’s time to have their backs.