Hong Kong’s message to Beijing is loud and clear. That city won’t succumb to creeping Chinese control, and the rest of the world shouldn’t either.

The crowds filling the streets between Hong Kong’s thin skyscrapers want to protect their autonomy, free speech, and basic rights against an insidious tide of Chinese Communist party influence. What started as a rally at the legislature against an extradition bill is now an unforgettable moment for this city of 7 million.

“Before this week I’d never been on a protest,” one 28-year-old Hong Kong resident told Britain’s The Guardian. 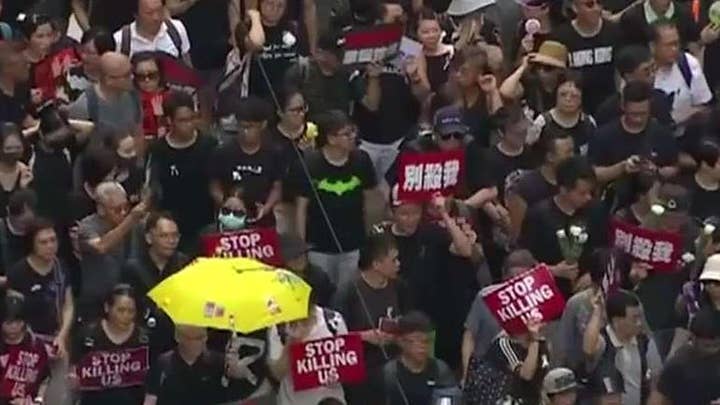 “We are watching the people of Hong Kong speak about the things they value,” said Secretary of State Mike Pompeo said to Chris Wallace on Fox News Sunday.

Hong Kong’s protests are a massive repudiation of Xi Jinping’s consolidation of power. Hong Kong is also showing the world that Trump was right. It’s high time to confront China.

Beijing would love to make Hong Kong shut up. Hong Kong was a thriving British colony from 1842 until 1997. But Hong Kong depended on supply from the mainland, China was getting stronger, and it seemed like time to welcome China to the Western economic and financial system. Still, when Britain handed over control in 1997, Hong Kong made a good deal. China’s leader Deng Xiaoping promised Hong Kong a high degree of autonomy until 2047. Hong Kong kept its own court system, and most of the legal and institutional protections of a Western democracy under the doctrine of “one country, two systems.”

That included free speech and unrestricted internet access and street rallies – privileges rarely seen in mainland China. Hong Kong remains a prosperous financial hub and residents exercise their free speech rights with events like the so-called umbrella protests of 2014 and annual remembrances of the June 4, 1989, Tiananmen Square incident. A cherished element of the agreement was that Hong Kong would not allow extraditions to mainland China. You can imagine why.

The lesson of Hong Kong? Hold firm when China won’t play by the rules. Trump saw that early on. Hence the tariffs and trade talks. Great Britain realized it too, deciding to remove Huawei devices from sensitive emergency response networks.

The new bill to permit Taiwan, mainland China, and other jurisdictions to extradite fugitives was sneaky. Just plugging a loophole and catching criminals, Hong Kong’s leadership claimed. Not so fast. China does not have an independent justice system. Hong Kong does. The extradition measure, if passed by Hong Kong’s legislature, would let Beijing pick up political dissidents, or really anyone, in Hong Kong.

In this jewel of a city, people could just disappear.

Small protests began in March. Hong Kong Executive Carrie Lam said the bill would not apply to political crimes. Few believed her. Lam was appointed directly by Beijing, and she had put the extradition bill on a 20-day fast track.

Then in June, protests grew. This past weekend, organizers estimated 2 million out of Hong Kong’s population of over 7 million took to the streets. Hong Kong police counted several hundred thousand at a minimum. The protests brought Hong Kong to a standstill.

Consider that Dr. Martin Luther King’s March on Washington for Freedom and Jobs on August 28, 1963, tallied about 300,000, according to the National Park Service.

Whatever the exact headcount, the point is Hong Kong won’t succumb quietly.

Yes, there is a brutal murder case at the center of it all. Back in February 2018, 20-year old Chan Tong-Kai killed his pregnant girlfriend, stuffed her in a pink suitcase, and dumped the body on the outskirts of Taipei, Taiwan. Then he stole money from her bank account and fled back to Hong Kong. Chan confessed. Taiwan indicted him in late 2018, and that’s when the extradition problem arose. Sadly, the brutal murder case was basically exploited as a political smokescreen.

For its part, Taiwan has sided with Hong Kong’s protestors. Taiwan said back in May they no longer wanted fugitive, Chan. The political fate of Hong Kong is just too important.

For Xi, the scenes in the streets of Hong Kong are a nightmare. Xi hates unrest. Most of China’s 1.3 billion people won’t even see what’s happening in Hong Kong because China blocks news and internet access.

The lesson of Hong Kong? Hold firm when China won’t play by the rules. Trump saw that early on. Hence the tariffs and trade talks. Great Britain realized it too, deciding to remove Huawei devices from sensitive emergency response networks.

Xi could do better as a world leader, for instance, by overt help with North Korean denuclearization and by cutting out the mischief in the South China Seas. Internally, China’s challenge is how to allow more freedoms alongside its prosperity.

Or there is the dark choice: more crackdowns, more control. Thanks to Hong Kong, the world will be watching.