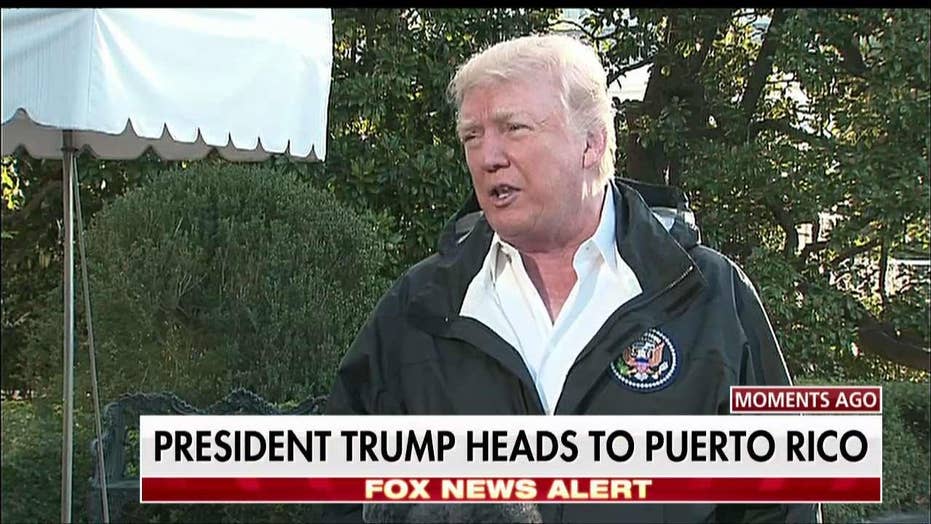 Trump on Puerto Rico Recovery: They Have to Help Us on a Local Level

Editor's note: This article was originally published on September 27, 2017.

President Trump will go to Puerto Rico next week to oversee ongoing rescue and relief efforts on the island which was devastated by Hurricanes Irma and Maria. With this visit comes the opportunity to help make Puerto Rico great again.

When candidate Donald Trump ran for the highest office in the land, he promised to fight for forgotten Americans. In the presidential election of 2016, the forgotten Americans of the Upper Midwest and the coal country of Kentucky and West Virginia, many of them life-long Democrats, delivered a decisive win for this first-time Republican candidate. The tropical island of Puerto Rico couldn’t be more different than America’s rust belt or the mountains of Appalachia, but here too live Americans who feel forgotten by our leaders and left behind by our economy.

Prior to President Obama, no sitting U.S. president had visited Puerto Rico since Gerald Ford. Still, President Obama’s 2012 visit was just a campaign pit stop, and it was for about as much time as he spent at a baseball game in Cuba with dictator Raul Castro.

That three-day visit to Cuba, incidentally, lavished glowing attention to the communist island and boosted Cuban tourism by 13 percent. That money and attention should have gone to helping our fellow American citizens in Puerto Rico.

A man looks for valuables in the damaged house of a relative after the area was hit by Hurricane Maria in Guayama, Puerto Rico September 20, 2017. (REUTERS/Carlos Garcia Rawlins)

President Trump won’t go to Puerto Rico to fundraise or campaign. He’ll go to show the people of Puerto Rico that he cares, to see the island-wide damage up close and personal, and to make sure that the federal government and mainland Americans don’t forget about our fellow citizens struggling in Puerto Rico.

President Trump's business reputation as a "doer" who can get results is essential now more than ever, as the hurricanes have knocked out most of the island’s power and basic infrastructure.

Moreover, with his extensive experience in the tourism industry, President Trump is uniquely positioned to understand and empathize with the effects of Irma and Maria on the island’s fragile economy.

His business background will also help him fully appreciate the consequences of the current debt crisis plaguing the island. Looking at the images of devastation coming out of Puerto Rico, it's hard to believe that anything could inflict as much damage as the winds and rains of these Category 4 hurricanes. But long before Irma and Maria, Puerto Rico’s irresponsible government policies led to economic recession, joblessness, massive debt, and an unprecedented exodus to the U.S. mainland. Tens of thousands of Puerto Rico’s most talented and ambitious citizens have made the painful decision to leave their families and their beautiful island in search of opportunities on the mainland, and countless thousands more will be forced to do the same if there is no decisive action to rebuild the island.

The Republican Congress has taken the lead in trying to help Puerto Rico restructure its debts and make the necessary reforms to get back on its economic feet through a bill introduced and passed last year called PROMESA. PROMESA, crafted to address the economic crisis, satisfy bondholders holding Puerto Rican debt, and protect U.S. taxpayers from another bailout, was a good and necessary first step. But making Puerto Rico great again will require more than Congress. It will need the attention and leadership of the president.

While in Puerto Rico, President Trump will not only see the effects of Irma and Maria, but also have an opportunity to discuss the deeper and equally damaging effects of the Puerto Rican debt crisis with Governor Ricardo Rosselló and the island’s business community.

Moreover, after experiencing the negative effects of big, unsustainable government, Puerto Ricans may be more receptive than ever to conservative ideas and solutions such as limited government, fiscal restraint, and serious entitlement and regulatory reform that will attract new investment to the island, and grow their economy. A strong, durable Puerto Rican economy will leave the island better prepared to handle future natural disasters.

So what can the rest of us do to help our American brothers and sisters in Puerto Rico? Well, if you are planning a Caribbean vacation, you can start by booking it to this warm and friendly island paradise as soon as it is ready to receive tourists. As a U.S. territory, your trip to Puerto Rico doesn’t require a passport or currency exchange. Hotels and amenities meet U.S. standards – not so in Cuba. And unlike Cuba, where your tourist dollars go directly to the communist Cuban regime, thereby funding and enabling a brutal dictatorship, you can feel good knowing that every dollar you spend on your dream vacation to Puerto Rico is, indeed, making America great again!

Rachel Campos-Duffy is a Fox News contributor and a mother of ten. Campos-Duffy is the host of FOX Nation's "Moms," on FNC's on-demand subscription-based streaming service. The program aims to shine a light on family life and motherhood with women from across the country. She is also a recurring guest host on the network's hit shows, "Fox & Friends" and "Outnumbered."