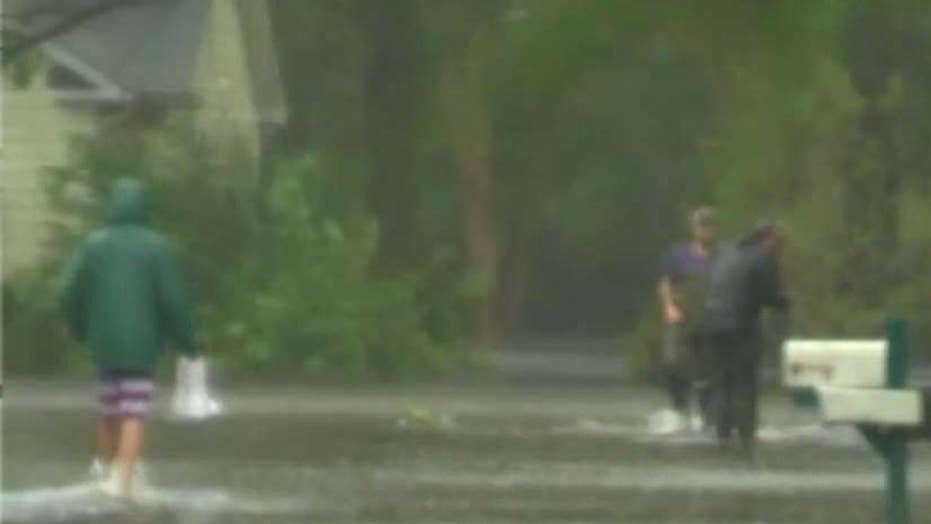 Rivers rise as Florence moves across the Carolinas

In high school, I read Jack London’s “To Build a Fire.” This engrossing story depicted a man and his dog who take a winter trek through the Yukon. Arrogantly ignoring the advice of an older man, the protagonist confidently believes that he is prepared for the harshness of the cold wintry environment. After falling through ice into freezing waters, he desperately tries to start a fire. However, he fails to notice that he starts a fire under a snowy tree branch, which extinguishes his fire, leaving the man scrambling to restart the fire. His confidence is misplaced and his efforts are futile. He eventually succumbs to hypothermia, and nature claims another victim. It was a classic story of human vs. nature. And nature won.

As Hurricane Florence bore down on the Carolina coast, there was a very real human vs. nature scenario unfolding. More than 1 million people were under mandatory or voluntary evacuation orders. However, not everyone leaves. Why do some people choose to stay during a hurricane whereas others comply to evacuate? Surely, there are numerous reasons why people might stay: a desire to protect their property, a fear of the unknown, or a lack of resources or fewer options may preclude evacuation. Or perhaps some people stay to prove—to others and to themselves—they are not afraid. Afraid of what? Well, death, of course.

Nature is powerful and needs to be respected. And our fear of death may drive us to make unwise decisions.

A long line of psychological research suggests that people are uniquely afraid of death. Terror Management Theory, pioneered in the 1980s by social psychologists Jeff Greenberg, Tom Pyszczynski, and Sheldon Solomon, argues that people are intelligent enough to realize that every living being dies, and self-aware enough to understand that they, too, will eventually suffer a similar fate: death. This awareness should be anxiety-provoking; after all, if everyone is destined to die, what’s the point of life? However, most of us don’t walk around gripped with existential fear. Instead, we go about our lives investing in things that bring us meaning: engaging relationships, cultural practices, religious beliefs, and purposeful work. So, in large part, we don’t consciously recognize this fear of death. However, deeper motivations that we aren’t always aware of may be at play.

Clever psychological experiments have shown that when people are reminded of death, either by asking to write about what they think will happen to them when they die or being shown images or words related to death, the research participants often respond defensively. They protect their cherished views, rally around people who are like them and distance themselves from or become aggressive toward those who are unlike them, and assert their dominance to reaffirm that they do not fear death. Think of all of things that people do to prove they are not afraid of death: they hurl themselves out of airplanes with a tiny parachute, fling themselves off cliffs with only a bungee cord tied around their ankles, or drive automobiles at incredibly high rates of speed for hours in an oval shared by dozens of other death-defying car enthusiasts. And while these activities may cause us to feel alive, they may do so by asserting our dominance over death. After all, how afraid of death can I be if I willingly choose to confront it?

Our desire to symbolically conquer death by showing that we are not afraid may lead to riskier behaviors. We may overestimate our abilities to survive and defeat the threatening environment, and underestimate the harshness of nature. We may trust our skill and ignore the sheer power of the impending threat. Like the unnamed protagonist in Jack London’s short story, we may choose arrogance over humility, perhaps in part to prove to ourselves (and to others) that we do not fear death. However, nature is powerful and needs to be respected. And our fear of death may drive us to make unwise decisions. I’m sure that some of the people choosing not to evacuate have good reasons for doing so. However, I encourage us all to acknowledge, with humility, our own frailty, and begin to accept the existential reality of what it means to be human, no matter how scary that is.

Daryl R. Van Tongeren is an associate professor of psychology at Hope College in Holland, Michigan.