The liberal New York Times has a popular podcast simply called "The Daily," and unsurprisingly, it airs on nearly 300 taxpayer-funded National Public Radio stations across America. Host Michael Barbaro is so soft-spoken you could argue he is the anti-Limbaugh. But that does not mean he's always calm and reasonable.

On Oct. 20, Barbaro brought on Times polling analyst Nate Cohn to discuss how the latest Times/Siena College poll contained ominous news for Democrats. The show began as a straightforward analysis of how Democrats grew optimistic about maintaining their control of Congress because the top issues were abortion, gun violence and the Jan. 6 committee (aka "democracy").

Now, as early voting kicks in, the Republicans are surging with the top issues of inflation, crime and immigration. Then, Barbaro said something jaw-dropping.

"Republicans wagered that a very focused, intensive effort on elevating issues favorable to them, namely crime and immigration, in ways that don't actually conform to reality," Barbaro claimed. "I mean, they're both, in some ways, manufactured crises – (it) really has the ability right before the midterms to swing swingable voters their way."

Martha's Vineyard, MA - September 16: Venezuelan migrants gather at the Vineyard Haven ferry terminal. The group was transported to Joint Base Cape Cod in Buzzards Bay.  ((Photo by Carlin Stiehl for The Boston Globe via Getty Images))

"Manufactured crises"? That could be described as "crime and immigration denialism."

At least Cohn pushed back a little: "I would say that these are real issues. Immigration and crime have been major problems in the minds of the electorate for a long time."

The facts are not on Barbaro's side. On Oct. 21, U.S. Customs and Border Protection reported that in fiscal 2022 (October 2021-September 2022), there were 2.37 million "migrant encounters," the highest annual total ever recorded. That's up a whopping 37% from President Joe Biden's first year and up 500% from 2020, the last year under former President Donald Trump.

Barbaro can't "manufacture" any concern over these numbers. He's not alone. In many months of the Biden presidency, NewsBusters has reported the evening newscasts of ABC, CBS and NBC have aired nothing, and in others, less than 10 minutes in a month. During this last fiscal year, the three nightly network news shows have aired only 143 minutes on immigration. 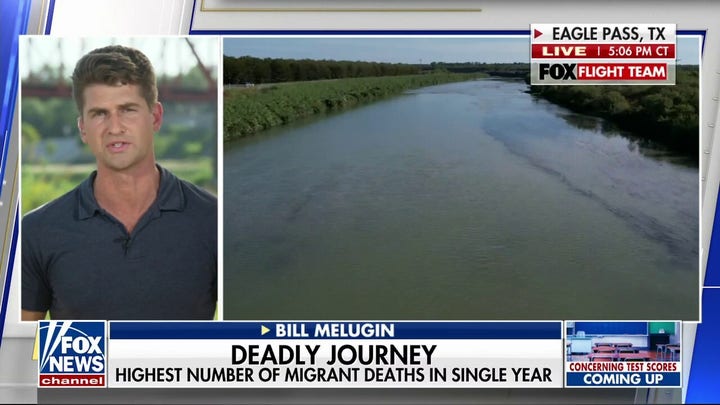 In August and September, the issue surfaced – but only as an anti-Republican story. Nearly three-fourths of all immigration news (44 out of 61 minutes) focused their anger at a few thousand migrants shipped to liberal locations like New York City, Washington, D.C., and Martha's Vineyard in Massachusetts.

The arrival of about 50 migrants in Martha's Vineyard on Sept. 14 was greeted by 19 minutes of coverage over multiple nights. This made a few dozen migrants about 6,000 times more newsworthy than the rest of the 2.37 million who crossed the southern border.

Biden goes almost entirely unscathed when the border crisis makes the news. We found only two negative comments (not counting comments by Republican and Democrat partisans).

Only ABC suggested any blame of the Biden administration. On Sept. 20, ABC viewers heard correspondent Rachel Scott shout a question as Biden tried to leave an event: "Why is the border more overwhelmed under your watch, Mr. President?"

By contrast, we tallied 26 negative comments about the Republican governors, compared with only a single nonpartisan comment supporting their tactics. ABC's Mary Bruce denounced the Martha's Vineyard shipment as "a stunt using human beings to score political points."

By contrast, for many years now, the networks have boosted illegal immigrants as somehow the best possible citizens imaginable. They've touted a pile of valedictorians while ignoring the murderers and rapists. Any negative news on immigrants is "manufactured." It can't possibly be real. This, from the people who routinely scream about "misinformation."